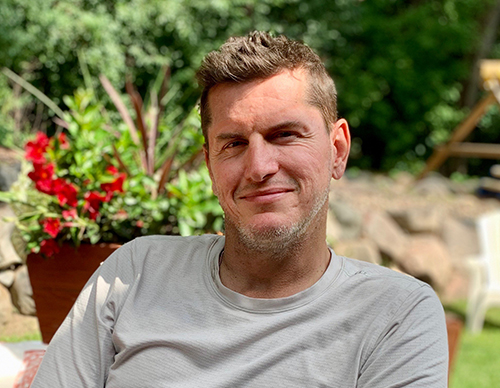 From the moment we walked in, it felt like home.

July 15, 2019 is a day Nick Oprish will never forget. A sudden storm that had sent golfers scrambling into the clubhouse at Olympic Hills Golf Club in his town of Eden Prairie, Minnesota, blew through. But soon after it abated, the most glorious double rainbow materialized.

“It was a perfect ending to a day that I'll never forget,” Nick says. “I took that double rainbow with me throughout my entire journey.”

And quite a journey it was, starting on May 1, when Nick and his wife, Melissa, learned that the chest pains Nick had were due to aggressive liver cancer. The golfers that day, some 500 people, had gathered to raise funds to support the Oprish family during Nick's treatment. Four hospitals, many doctors, and 384 days after that fateful day in May — “the day our lives stopped,” Nick recalls — he and Melissa returned home to Minnesota from New York City, after arduous liver cancer treatment and a liver transplant at NewYork-Presbyterian/Weill Cornell Medical Center.

A strong, athletic man, the diagnosis floored him. Nick, a sales management professional, had been diagnosed as a teenager with cryptogenic cirrhosis (which his current doctors later corrected to autoimmune hepatitis), but otherwise had not had trouble with his liver as an adult.

“Hearing I had liver cancer was a shock,” he says. “I was a healthy guy. I thought I was invincible.” He worried for the future of his daughter and two sons, now ages 8, 6, and 3.

“I thought, 'what will my wife do?' I couldn't bear to think of not being there to see my kids grow up,” Nick adds.

The cancer posed a formidable challenge. It had overtaken more than half of his liver, preventing him from being a candidate for liver transplantation. In the weeks to follow, doctors at two major medical centers in Minnesota told him they had no definitive treatments to offer, but Nick would not take no for an answer. One doctor referred him to a hospital in Toronto that had a reputation for performing liver transplantation in high-risk patients, and maybe their protocols would allow Nick to be a candidate.

The physician there, however, connected Nick with the team that would save his life — the liver care experts at NewYork-Presbyterian/Weill Cornell Medical Center. That doctor is a colleague of transplant surgeon Dr. Karim J. Halazun, whom he knew might consider the liver transplantation process for Nick. Dr. Halazun and hepatologist Dr. Catherine Lucero (a medical doctor who specializes in liver care) decided to start the transplant evaluation. In one whirlwind day that June, Nick and Melissa had seven appointments. The doctors agreed that if they could use aggressive but smart treatment to shrink Nick's tumors to a certain point, he might be able to get on the transplant list. His doctors assured Nick that he was in good hands. “From the moment we walked in, it felt like home,” he says.

“There is no way for me to translate how this team operated together. As we left, we both plopped into the cab and cried together — hopeful, incredibly grateful tears,” wrote Melissa in the blog she kept during Nick's journey. “We had 500% confidence that these doctors would fight for him to be approved for this path. We saw their drive and empathy for him right before our eyes.”

In the months that followed, interventional radiologist Dr. Anuj Malhotra, administered six treatments. They included radioactive beads inserted through a catheter directly into Nick's liver tumors (an outside-the-box choice, since Nick had high blood levels of a liver protein called bilirubin), as well as periodic treatments of chemotherapy drugs and synthetic materials placed into a blood vessel feeding a tumor to cut off the tumor's blood supply and trap the chemotherapy inside it. This was an extremely risky procedure because his liver function was already compromised and he could get much sicker with any treatment.

Nick would be admitted to NewYork-Presbyterian/Weill Cornell each time he came in for a treatment, returning to Minnesota in between. Each treatment entailed the insertion of catheters through an artery in his groin and required him to lie still for five to seven hours as they were administered. He and Melissa were heartbroken at having to leave their children at home (under the loving care of family), but knew they were doing what needed to be done to give Nick a fighting chance of beating his cancer. “I felt pretty beat up, but I kept thinking, 'I'm going to lie on this table as long as I need to so I can get back to my kids,'” Nick asserts.

Over time, the tumors responded to the treatment, shrinking and in some cases completely dying. After many ups and downs, including the discovery of other liver tumors that were also treated, Nick finally received the news he was waiting for: he was put on the waiting list for a liver transplant. After completing his final interventional radiology treatment on February 14, 2020, he and Melissa stayed a bit longer in New York City to recover. They got the lifesaving call they hoped for from Dr. Halazun at 4:45 am on February 22. A liver was available.

Just a few hours later, Nick was in the operating room, where Dr. Halazun and his colleagues removed his cancerous liver and replaced it with a healthy one. While he responded well to the transplant, he developed other complications that required a return admission to the ICU: internal bleeding that caused him to lose a great deal of blood. It was traced to a small tear in his stomach lining, which was repaired endoscopically by hepatologist Dr. Russell Rosenblatt. His doctors also found that he had a tear in his aorta called an aortic dissection — likely a result of high blood pressure and underlying congenital disease, which is now being monitored.

Slowly but steadily, Nick rallied, and on March 12, he was discharged from the hospital. He and Melissa rented a nearby apartment and stayed there until mid-May so Nick could be monitored by his team with periodic blood work and visits. The COVID-19 pandemic was strongly hitting the city by this point, so many of their meetings with their doctors were done through telemedicine. Nick worked very closely with Dr. Lucero to ensure he was taking the appropriate medications to prevent liver rejection while also avoiding infection. He and Melissa spoke with their children and family members frequently during video chats to stay connected.

As a couple who relies heavily on their faith, both felt blessed that the donor liver became available before the worst of the pandemic had hit. “It’s not one bit lost on us that Nick got that call when he did,” Melissa wrote. “Had we been home still waiting for a liver during this pandemic, he wouldn’t be able to fly out to New York for treatments to control his cancer while we waited. There are so very many roads we could have been led down, and we constantly remember the gift our family has been given.”

On May 18, Nick and Melissa packed up their things and finally went home. He undergoes regular blood work locally and has telehealth visits with his New York doctors, with whom he has forged a lifelong bond. He and Melissa are also eternally grateful to the many people along the way who supported them — from family and friends to strangers who heard their story and wanted to help.

As he continues to recover, he looks forward to a summer of swimming, golf, and enjoying time with his children. “I look at life through a different lens now. I'm slowing down and really listening to people, with empathy and grace,” contends Nick. “At the end of the day, you need to look yourself in the mirror and ask, 'Have I done right?' This experience has really changed me.

“Amazing things are happening at NewYork-Presbyterian, and it's not just the treatments — it's the people. The doctors, the nurses, and the staff are all amazing,” he adds. “They gave me a second chance, and I plan to make the most of it.”