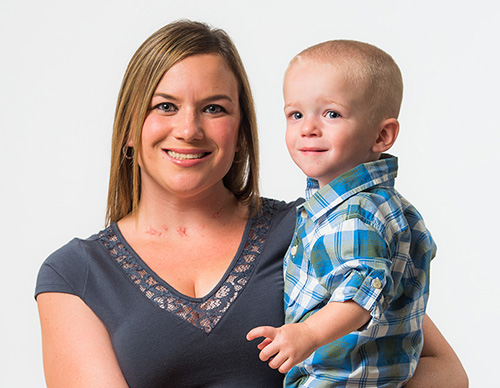 We’re just so appreciative of everything the hospital did for us. They saved not just one life, but two: mine and my son’s.

Melissa Barvel doesn’t remember anything that happened during Christmas 2013 or the weeks that followed but for her family, that period was life-changing.

“I wasn’t feeling well and stopped by a hospital near our home,” Melissa recalls. “The next thing I knew I woke up, it was February 5th, and I was at NewYork-Presbyterian.”

Six months pregnant with her second child, Melissa contracted the H1N1 virus, commonly known as the swine flu. A respiratory disease typically found in pigs, humans can contract the disease from being in contact with infected pigs or a person who has been infected. It then quickly spreads through coughing and touching contaminated surfaces.

For a majority of the population, swine flu poses the same risk of complications as seasonal influenza. However, specific high-risk people — pregnant women, infants and small children, and those 65 and older — are at an increased risk of complications, such as pneumonia and respiratory failure. As a high-risk population, the Centers for Disease Control and Prevention recommend pregnant women get vaccinated.

Melissa did not heed the warning.

At the hospital, she was told she had developed double pneumonia — a lung infection that affects both lungs — that turned into acute respiratory distress syndrome (ARDS). The physicians at the Staten Island hospital soon realized they were not equipped to treat Melissa. They called NewYork-Presbyterian/Columbia University Medical Center to see if Melissa was a candidate for ECMO (extracorporeal membrane oxygenation), an advanced form of life support used to restore lung function in patients experiencing cardiac or respiratory failure.

On Christmas Eve, Dr. Matthew Bacchetta, Director of the Adult ECMO Program, accompanied Melissa to NewYork-Presbyterian/Columbia, where she was put in a medically induced coma.

NewYork-Presbyterian has one of the most extensive ECMO programs in the world. Working jointly with the labor and delivery team at NewYork-Presbyterian Morgan Stanley Children’s Hospital, Dr. Bacchetta and the multidisciplinary ECMO team devised a comprehensive treatment plan for Melissa and her baby. The doctor’s decided it was best to deliver Melissa’s baby to help speed up her recovery.

“My son was born two weeks into my 45-day coma,” Melissa recalls. Born at 28 weeks weighing just 2 pounds, 10 ounces, Scott, Jr. was moved to the neonatal intensive care unit at the children’s hospital.

“Scott was sort of a celebrity,” Melissa recalls with a laugh. “Everybody knew Scott’s name! They still recognize him now — and my husband, too, who was there every single day with me.”

When reflecting her experience, Melissa says she didn’t realize how important it is to have a hospital and doctors with the expertise at NewYork-Presbyterian. “I never knew the difference before,” she says, “I credit Dr. Bacchetta with saving not only my life but also the life of my son, Scotty.”

Though Melissa doesn’t remember anything from her time on ECMO, she feels it is important for other families going through a similar situation to hear her story. Melissa and her husband are now volunteers at the hospital, talking to families about what to expect.

“People don’t often know what to expect from ECMO, I am an example of someone who has recuperated well in the two years following my hospitalization. I show them that I went through this traumatic thing, too, and I’m okay — it gives people hope,” she says.

Contact Melissa Barvels or her husband, Scott, via email at [email protected].

Learn more about ECMO at nyp.org/ecmo.