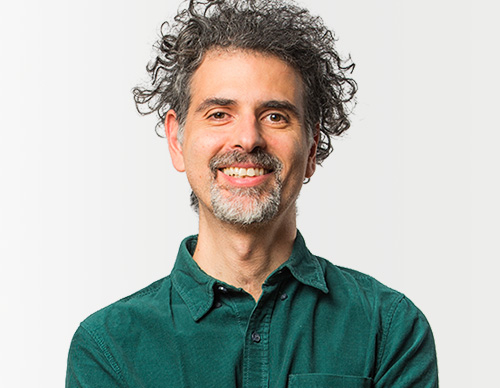 It’s not by chance that I went to NewYork-Presbyterian. It’s the best hospital in the world. I’m extremely lucky.

Despite countless surgeries to remove tumors throughout his body, Manuel Greco continues to see the positives in life.

At 16 years old, Manuel was diagnosed with Von Hippel-Lindau (VHL) disease, a rare hereditary condition associated with hemangioblastomas, which are blood vessel tumors that can form throughout the body. “In VHL, genes that are responsible for suppressing tumor growth are missing, such as in my case, or one of the genes is damaged,” says Manuel.

VHL patients can develop tumors in several locations, including the brain, the spine, and the eyes, as well as in the kidney, the pancreas, and other organs. Depending on where the tumor arises, it can be either malignant or benign.

“I developed the first symptoms and was diagnosed in 1990,” recalls Manuel. “My parents searched for the best doctors available. The only doctor who was able to do such a complicated surgery was the head of neurosurgery at Columbia. Then the tumors came back. They weren’t in the same location, but always in the cerebellum.”

VHL disease requires constant attention and a strict MRI schedule to identify new tumors or those that have regrown. Manuel has had more than 15 brain surgeries since he was 16 years old, with almost all of his procedures performed by Michael B. Sisti, MD, Co-Director of the Center for Radiosurgery at NewYork-Presbyterian/Columbia University Medical Center. He also has had one kidney removed and is now scheduled to have a malignant tumor removed from his other kidney.

Despite these hurdles, Manuel remains thankful and positive about his life. “My parents have been super supportive, and my wife is extraordinary,” says Manuel, who holds a PhD in physics and is the Executive Director of Quantitative Research at Morgan Stanley. “The people I work with are extremely generous, kind, and supportive. I’m able to take time off whenever I need it. I go for physical therapy once a week, and I can work from home once a week. They’ve been standing by me for 15 years, and I’m so loyal to them because they’re like my family.”

Manuel is currently Vice Chair of the board of the VHL Alliance, a fundraising organization and resource for VHL diagnosis, screening, and treatment. He recently helped organize the VHL Alliance’s 3rd annual fundraising gala held on January 28, 2016, at The Plaza Hotel. The event honored Dr. Sisti for his work with VHL patients.

“It is estimated that 10,000 people in the United States who have VHL,” says Manuel. “I think I have a mission and a moral duty to do something for others because I’ve been so lucky.”

For more information on the VHL Alliance, visit www.vhl.org.