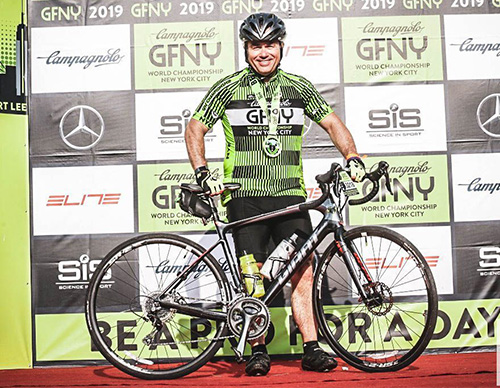 Losing the weight and keeping it off gave me the confidence I didn’t know I lacked.

Lance Herman, 58, had struggled with his weight for years. When his brother, Glenn, told him about a weight management program at NewYork-Presbyterian/Columbia University Irving Medical Center, they decided to sign up together. Two and a half years and nearly 50 pounds later, Lance is so glad he did.

Each week for 12 weeks, he and Glenn and two other patients met for an hour with registered dietitian Jamie Leskowitz at the Weight Control Center at NewYork-Presbyterian/Columbia University Irving Medical Center. Each group session included private weigh-ins and discussions addressing the benefits, barriers, thoughts, and action plans around changing old habits and establishing new, healthier habits. Group members shared their hopes and struggles with each other, which Lance found very helpful.

“I was not a big sharer before this, but it became more comfortable over time,” recalls Lance, who manages a staffing firm. “It was really good to hear other people’s struggles and know they were going through similar things.”

Jamie’s goal was to help the group establish a healthy relationship with food and create sustainable eating habits they could follow for a lifetime. It was just what Lance needed, being someone who had portion control issues and often ate out of boredom. He logged everything he ate into an app that Jamie could access and respond to.

Lance began losing weight early in the program, and that motivated him to stick with it. He can eat any food in moderation and learned how to build a healthy plate, avoid eating in front of the television, eat more vegetables, limit his pasta and bread intake, and even treat himself occasionally to a very small dessert.

“I almost can’t have a meal now without a vegetable,” he asserts. “And I follow the three-bite rule for dessert: The first bite is to savor, the second to enjoy, and the third to finish.” Logging his meals and snacks helped him become mindful of what he was eating and how he was feeling.

Although he enjoyed bicycling before the program, Lance didn’t consider himself a big exerciser. But today he’s totaling about 100 miles a week riding his bicycle near his home in Chappaqua, New York. “Now I crave exercise the way I used to crave food!” Lance notes. “If I have a lapse and eat a little more than I should, I just exercise more.”

After the first 12-week program, he took a few months off and then returned for another 12 weeks for the “continuation” program, which addressed advanced topics at each session to further explore ways to continue and maintain weight loss. His motivation and commitment have paid off: He’s lost nearly 50 pounds. More importantly, Lance is continuing to eat healthy meals and exercise regularly. “It’s not about learning — it’s about being mindful,” he explains. “This is not a diet. It’s the way I live now.”

There were other benefits that went beyond the scale. His type 2 diabetes, diagnosed 20 years earlier, improved to the point where he no longer needed insulin injections, and he could cut his dose of metformin in half. He was able to take less blood pressure medication, too. He even had to get refitted on his bicycle because his belly that was once in the way was no longer a problem, and he could reach further on his handlebars.

There were also emotional benefits. “Losing the weight and keeping it off gave me the confidence I didn’t know I lacked,” Lance contends. “I now have a certain peace and satisfaction with myself.”

He heartily recommends the program to anyone seeking to lose weight and live healthily. “It is a lifechanging program. Jamie is professional and very respectful of everyone’s needs and wishes. There’s no one-size-fits-all plan. Whatever works for you is what works.”