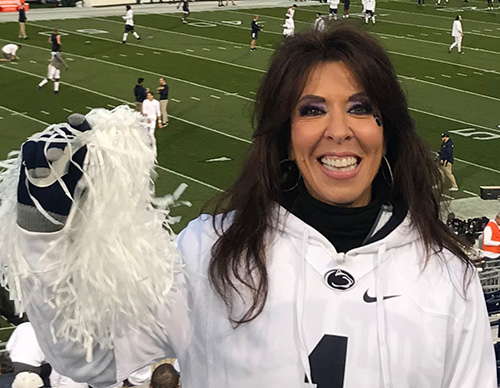 To be able to eat again and feel normal was such a joy!

Jean Kane, 55, expected to have some problems with her liver. Her mother had polycystic liver and kidney disease, and Jean inherited the same illnesses, diagnosed when she was 16. When she reached age 45, however, the cysts began growing dramatically.

“I looked like I was pregnant with triplets!” she recalls. Thanks to a liver transplant at NewYork-Presbyterian/Weill Cornell Medical Center, today she’s feeling good again, embracing all life has to offer.

When Jean’s liver cysts grew larger, her family became concerned. Because the liver was pressing against her stomach, she couldn’t eat, and sometimes she couldn’t drink. The rest of her body became nearly skeletal. “My husband, Jerry, and my daughter, Brittany, said they felt like they were watching me die,” says Jean, who lives with her family in New Jersey.

Carrying rosary beads in her pocket that had been blessed by the Pope, Jean visited Dr. Samstein in March 2017, telling him hopefully, “I just want to feel better.” In return, he told her the words she had been wishing to hear: “You’ll need a liver transplant.” She signed all the required paperwork there and then and was soon placed on the transplant waiting list, receiving pre-transplant care from transplant hepatologist Dr. Brett Fortune. She attended the hospital’s workshops for people waiting for a liver transplant, where transplant recipients explained their experiences.

“These people had been sick and dying before the transplant and were now so healthy and happy, and I knew after seeing them that I was going to be okay,” Jean contends.

On July 13, 2017, she received her new liver. The diseased cystic liver Dr. Samstein removed weighed an astonishing 25 pounds — nearly eight times heavier than a normal liver. Jean was in the hospital for just over a week, returning home to recuperate. Nine weeks after her surgery, she was back to working out in the gym, cooking in her kitchen, and eating whatever she desired.

“To be able to eat again and feel normal was such a joy!” exclaims Jean, who now speaks about her journey at the hospital’s liver transplant workshops.

She has since consolidated all of her specialists in one hospital, NewYork-Presbyterian/Weill Cornell, seeing Rogosin Institute kidney physician Dr. Jon Blumenfeld, for her polycystic kidney disease (which thankfully does not cause symptoms). In March 2019, Dr. Fortune referred her to gastroenterologist Dr. Dana Lukin. He diagnosed her as having colitis (inflammation of the large intestine) that was likely due to inflammatory bowel disease (IBD). Dr. Lukin, an IBD specialist who works with the liver transplant team, prescribed two medications Jean can take at home to keep her colitis in check.

Today Jean sees her NewYork-Presbyterian/Weill Cornell doctors every three months and has blood work performed every six weeks. During the COVID-19 pandemic, she’s been able to have her blood work done at a lab closer to her home and see her physicians through telehealth visits. She values the NewYork-Presbyterian/Weill Cornell patient portal, Weill Cornell Connect, which lets her see all of her test results, keep track of her medications, and communicate with the various members of her team.

“You have not seen medicine practiced like this until you go to a place like NewYork-Presbyterian/Weill Cornell. It was phenomenal!” concludes Jean. “I feel so secure and comfortable and know that I am in the best of hands.”