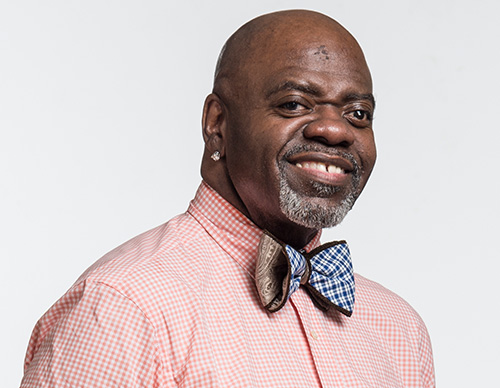 They treated me with humanity when I felt inhumane.

Not every journey begins with a single step. Davarn Wright's journey to visit a neurosurgeon about his ailing spine sure didn't — because Davarn had trouble standing up.

In fact, when Davarn, 48, first called the office of Dr. Michael Kaiser, at The Spine Hospital at the Neurological Institute of New York at NewYork-Presbyterian/Columbia University Irving Medical Center, he wasn't sure how he would make it there at all. Stenosis in his upper spine — a narrowing of the spinal canal that pinches the spinal cord — was so severe that his brain and his legs could barely communicate. Although he lived with spinal stenosis for a decade, he didn't think it would get so severe. He sometimes felt tingling in his feet, but he went on with his busy life in Jersey City, New Jersey, working as a compliance analyst and taking care of his close-knit extended family and wider community.

In 2014, weighing over 450 pounds, he was diagnosed with a herniated disc in his lower spine and advised that losing weight would help reduce the stress on his back. He made some dietary improvements, engaged in physical therapy, and received spinal injections and chiropractic adjustments, but his health continued to decline.

By 2015, he became clumsier, and falling meant needing help to get up. Sometimes when his legs gave out, he would make a phone call and need to wait for hours for someone to come help him. “I've always been the person everyone depends on, so it was hard for me to be so helpless and dependent on others,” says Davarn.

Eventually the stenosis got so bad that he had trouble getting to the bathroom in time. At work one day, he set out for the bathroom with his walker. Before he got there, he lost control of his bladder and bowel — symptoms of severe spinal stenosis. Horrified, he called a coworker and explained the situation. He asked her to notify maintenance and said he wanted to go home. She pulled his car around. But on his way to the car, he fell. With the additional help of his supervisor, the maintenance director, and a security guard, he eventually made it to his car and went home.

Surgery to relieve his stenosis is a fairly common procedure and relieves compression on the spinal cord. However, at 400 pounds, Davarn was too heavy for most operating room tables, which only accommodate patients weighing up to 350 pounds. Surgeon after surgeon turned him away, until he met with Dr. Kaiser. He was willing to do the surgery. But he didn't make any promises, including the ability of Davarn to walk without a cane or walker afterward.

“Dr. Kaiser told me he couldn't guarantee he could make it better, but he could keep it from getting worse,” says Davarn. “My hope and faith in God was the reason I told him that I would walk again, even though he wasn't sure if I would — and that if I did, it would be with mobility assistance.”

On January 13, 2016, Dr. Kaiser spent nine hours completing a procedure that would normally take six hours. The surgery to decompress Davarn's spinal cord involved a large portion of his spine, and bone graft and metal rods were implanted to stabilize the long section of the spine.

Davarn recalled the compassion and support of all those who cared for him.

“They treated me with humanity when I felt inhumane,” he explains. Davarn spent the rest of the month recovering at NewYork-Presbyterian/Columbia University Irving Medical Center and moved to a rehabilitation center afterward, where he worked on regaining strength and function.

Dr. Kaiser was impressed: all signs were pointing to the possibility of walking again. By March, he went home to continue rehabilitation there. He needed a second surgery to fix a support rod that had come loose, and then continued on his road to recovery. “I don't have a give-up attitude,” says Davarn.

By that fall, he was walking well, and in December he had bariatric surgery to help him achieve a healthy weight. When he saw Dr. Kaiser in June 2017, he took public transportation to get there. No walker. No cane. “Well, Mr. Wright, I stand corrected,” Dr. Kaiser says. “I remember telling you that you would probably never walk again, and here you are!” He is down to 250 pounds. His devoted wife, Vaughneva, followed suit, having bariatric surgery in July 2017 and losing 132 pounds.

Today Davarn works out four to five times a week at the gym, walking at a brisk pace on the treadmill and lifting weights. He and his friends formed Team Get Wright, and the group urges each other to get fit by sharing videos with each other showing them working out. They are training to walk a 5K race. Davarn would like to start a 5K to raise funds for spinal cord injury research. “There are a lot of people suffering in silence,” he contends.

He has never felt better. “I feel absolutely great! The world hasn't seen my potential. I am ready to live my best life,” Davarn concludes. “When they say 'Amazing Things Are Happening at NewYork-Presbyterian,' I say, 'yes, and Davarn Lemont Wright is one of them!'”