My balance, my legs... everything felt new. It was like walking in a new body. And I had room to breathe. 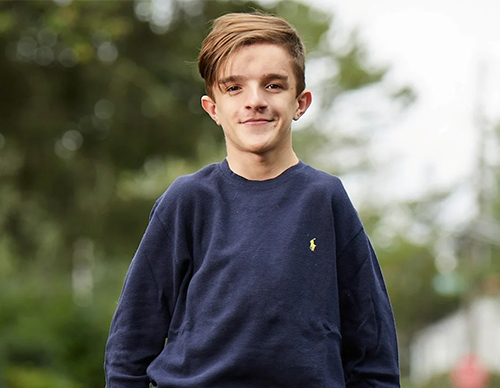 Scoliosis is a disorder in which the spine curves to the right and/or left of midline. Kyphosis is a hunching of the upper back caused by a spine which curves too far forward. For much of his young life, John had both. And by 2016, it was close to taking his life.

That November, his parents, Joanne and Mike, brought John, then 16, to NewYork-Presbyterian to see Dr. Lawrence Lenke, a world-renowned spine surgeon at NewYork-Presbyterian Och Spine Hospital. They knew his condition had dramatically worsened. What they didn't expect to hear were Dr. Lenke's words, "John's spine is bending by the hour."

Yes, they knew he had been in pain a few weeks after his last spine surgery, that he couldn't keep food down, and that he had trouble breathing. What they also learned that day was that John's oxygen levels were declining and that his immune system wasn't functioning well. Their son would die unless something was done immediately.

John and his family were used to a lifetime of spine surgeries. Diagnosed with scoliosis at five years old, he began wearing a brace for 18 hours a day to straighten his spine. "I never thought I was different from other kids, but my parents knew something wasn't right," John recalled. "As I got older, it just kept getting worse."

Indeed, his scoliosis did get worse, despite the brace, when he went through his growth spurt around age 7. After meeting with multiple specialists, one surgeon suggested the insertion of metal rods to straighten his spine, with surgical lengthening of the rods performed every six months. The surgeries began in 2007, with 14 taking place from 2007 to 2013 alone.

When he turned 13, however, his back began to hunch forward as kyphosis developed, impairing his ability to breath. "Even walking through town with my friends, I'd be out of breath," said John, who lives on Long Island. Moreover, the rods supporting his spine began to break. Eventually they became ineffective and had to be surgically removed. Their orthopedic surgeon told them he couldn't do anything further and referred John to Dr. Lenke.

When they met with Dr. Lenke, Joanne and Michael learned their son's life was in danger. "He was being crushed

to death, as his spine collapsed onto his heart and lungs," said Joanne. "He was suffocating."

John's case was one of the most challenging I had ever taken care of, noted Dr. Lenke. "We had to start treatment immediately".

In preparation for a more complex operation later, John had a halo implanted: a bracket around his skull that was connected to a device to apply traction and stretch out his spine. He stayed in the hospital for six weeks while the halo did its work. "I was instantly breathing better and my throat felt better, too," said John. Specialists from physical therapy, respiratory therapy, nursing, nutrition, Child Life, and other hospital departments worked together to support John's health. Hospital teachers helped him keep up with his studies. His neck lengthened, he finished healing from his prior surgery, and he gained nearly ten pounds.

John was now ready for Dr. Lenke to perform the 13-hour operation that would restore both form and function: "vertebral column resection," a rarely performed complex surgery that involves breaking the spine in the middle, separating it into two pieces, moving the pieces into their correct positions, and then using instruments to permanently fix the spine in place. The spinal cord is at risk of injury during this delicate process, and indeed John was essentially paralyzed for about three hours at one point during the operation.

It was not something Dr. Lenke hadn't encountered before, however, and he knew how to handle it. As he gingerly removed the abnormal vertebrae and realigned John's spine, his spinal cord responded. He was out of the woods. After three days in intensive care, John was up and walking. "My balance, my legs…everything felt new," noted John. "It was like walking in a new body. And I had room to breathe."

He went home after seven days in the hospital and continued physical therapy. He was homeschooled for the remainder of his sophomore year and all of his junior year to allow for a smooth recovery while he gained weight and got stronger. By the time 12th grade came around, John was able to attend his new high school and enjoy his senior year while making new friends, including all that 12th grade brings: prom, graduation, and getting ready for college. "When I went to the tailor to get fitted for my tuxedo for prom and I looked in the mirror, I thought, 'Is that really me?' It felt good to see myself standing up so straight."

Two years after his operation, John—now six inches taller—goes to community college while he continues with twice weekly physical therapy. He's back to playing basketball and is happy his golf swing has improved. He's also starting to take driving lessons—an important step toward his independence as a young adult.

I was so honored and privileged to take care of someone like John and his family, gain their trust, and help him lead a more normal life, noted Dr. Lenke.

"My appreciation for Dr. Lenke extends farther than words. With his gift, he was able to perform a surgery that saved my life and opened so much opportunity to live while being happy and healthy," concluded John. "I'm most excited about moving on and not having to constantly think about the next surgery. Now I can just focus on school and be at the same level as everyone else. It's exciting."