When I heard that they could take my CAT scan, and can actually practice my surgery before they go in and do it, I thought, ‘that’s fantastic! 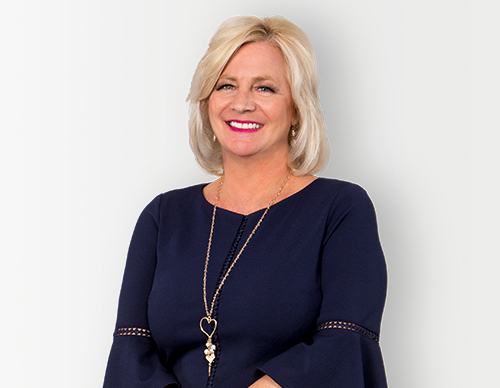 Bridget Pasapane had grown accustomed to the lower back pain she had been experiencing for almost ten years. But in the summer of 2016, the mother of two college-aged students from Whitehouse Station, New Jersey says the pain got worse following the passing of her husband.

“My husband and I were small business owners. I couldn’t run our business without him, so I had to recreate myself. My old boss offered me a job. But it was a 90-mile drive roundtrip to get to and from the job,” Bridget says. “Sitting in bumper-to-bumper traffic every day was unbearable. At some point, I’d be dragging my legs out of the car.”

Bridget spoke to a doctor friend who recommended she see a local orthopedic surgeon.

“I told the doctor, surgery wasn’t an option for me. I had to work,” she recalls. So her doctor took a conservative approach, giving her epidural steroid injections to relieve the pain and prescribing physical therapy. But after six months, Bridget says relief was sporadic. Her doctor told her it was time to consider surgery and recommended she get a second opinion.

“I went for the second opinion, and he said, ‘you need to have your whole spine done. That would be a year of

recovery. You have scoliosis and issues with your whole spine.’”  She was then referred to Dr. Ronald Lehman, Chief of Degenerative, Minimally Invasive and Robotic Spine Surgery at the NewYork-Presbyterian Och Spine Hospital.

Dr. Lehman told Bridget she wouldn’t need surgery on her entire spine, and recommended she undergo spinal fusion surgery to join the degenerated discs in her spine that were causing her pain. For increased surgical accuracy, Dr. Lehman would perform the surgery robotically.

When I heard that they could take my CAT scan, and from those images, they can actually practice my surgery before they go in and do it, I thought, ‘that’s fantastic,’” she says

After Bridget’s surgery in October 2016, she began physical therapy and was discharged from the hospital within four days. As she continued to recover at home, Bridget began to develop pain and weakness in her arm. During a follow-up visit with Dr. Lehman, he determined the pain is due to a pinched nerve in her neck. An MRI showed she had cervical myelopathy and radiculopathy — compression of the spinal cord and nerve roots that pass through the neck. Bridget had been experiencing discomfort in her arm because those nerves pass through the cervical spine.

Bridget underwent a second surgery, this time on her neck, in July 2017, just six months after the first procedure. She says the recovery period after the second surgery was much faster.

Reflecting on her choice to have her surgery at the NYP Och Spine Hospital, Bridget says it was the best decision.

My other doctor told me if I went to [NewYork-Presbyterian], I’d just be a number. I wouldn’t get any personal attention. But I didn’t feel like I was a number. I feel like the team is family,” she says.  “I’ve run into people many times who tell me they have back problems and I recommend Dr. Lehman to them. The doctors and nurses were great.