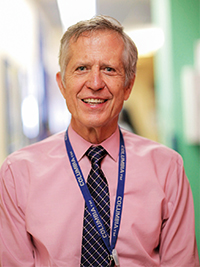 When David P. Roye, Jr., MD, Co-Director of Pediatric Orthopedics and Executive Director of the Weinberg Family Cerebral Palsy Center at NewYork-Presbyterian/Columbia University Irving Medical Center, began seeing adult patients with mild to moderate cerebral palsy, he identified a presentation pattern that gave him pause. “It became clear to me that many of these patients were being treated by physicians unaccustomed to seeing patients with cerebral palsy,” says Dr. Roye. “These middle-aged patients presenting with trouble walking and increased spasticity in the legs causing more tripping and falling were being told that their symptoms were related to aging and to their cerebral palsy.”

Unconvinced that the symptoms were directly related to cerebral palsy, Dr. Roye and Joseph P. Dutkowsky, MD, also a pediatric orthopedist with expertise in cerebral palsy, went looking for another explanation. “Making a diagnosis is difficult because these patients already have an abnormal neurologic examination,” says Dr. Roye. “A typical patient with diplegia, for example, whose reflexes are hyperactive, will have abnormal findings in terms of tone and range of motion, so diagnosing a cause other than CP is challenging.” 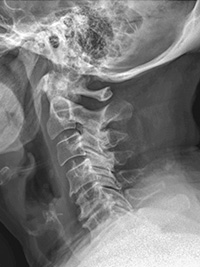 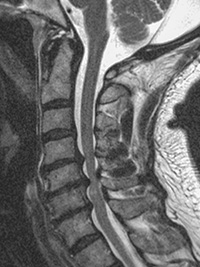 Five years ago, Dr. Roye began to screen these patients with X-rays of the cervical spine. “When we had sufficient evidence that something was going on, we would order an MRI,” says Dr. Roye. “We started discovering many patients had cervical spinal stenosis. One patient from Atlanta had heard about our program and came up to see me. She had so much narrowing in the cervical spinal canal that she had ablated almost two-thirds of the space for the cord and had gone from being ambulatory to a wheelchair. She was also having bladder control problems. But nobody thought to look at her spinal cord.”

Dr. Roye referred the patient to , Director of Cervical Spine Surgery at the Daniel and Jane Och Spine Hospital at NewYork-Presbyterian Allen Hospital. “After surgery and rehabilitation, she went back to ambulating,” says Dr. Roye.

Untreated, cervical spinal stenosis (CSS) can lead to sequelae such as loss of ambulation, upper extremity dysfunction, and incontinence. Although an association with CSS is well-recognized for athetoid/dystonic types of cerebral palsy, there is scant evidence and consists primarily of case reports. There was also little information available on CSS in patients with spastic CP.

“It’s been known in the last decade and a half that patients with dystonia are at an increased risk for cervical spinal stenosis,” says Dr. Roye. “But what we found is that there is just as much increased risk in our spastic patients.”

As Dr. Roye explains, many of these patients are high functioning and cognitively normal. “These individuals are teachers, lawyers, mothers, and fathers. They’re out in the world moving and doing things. They are also eight times more likely than the typically developed person to have cervical spinal stenosis. And not only that, it also occurs two decades earlier.”

In the general population, patients over 70 years are reported to have a higher risk of CSS, noted the researchers. However, the mean age of patients with CP presenting with CSS was much lower in their study cohort – 54.5 years of age.

The clinical difference in the CP population, notes Dr. Roye, is that half of them do not report neck symptoms because their stenosis is more central, pressing on the cord as opposed to pressing on the nerve roots. “The other half do report neck pain or radiating pain down the arm, the kind of pain that usually leads a person who does not have CP to seek a diagnosis,” he says. “Another reason why the diagnosis is often missed or delayed for years is because patients with cerebral palsy are accustomed to being in pain and don’t expect to be treated for it. I believe they ignore the symptoms they have, whereas other people might not.”

In their study, the results of which were published in Developmental Medicine and Child Neurology in August 2017, the investigators found that of the patients with CSS, 73 percent presented with upper extremity symptoms, 70 percent with ambulation decline, 53 percent with neck pain, and 30 percent with incontinence.

Today Dr. Roye orders cervical spine X-rays for each new patient with CP over the age of 35 whether or not they have complaints. “I want to assess where they are and establish a baseline, knowing that I’ll be seeing them on an annual or biannual basis and can continue to watch them,” he says.

With patients in their 40s and 50s for whom he suspects having a reasonably high index of falling, worsening muscle spasms, and urinary bladder malfunction, Dr. Roye proceeds directly to an MRI. “I feel this is necessary even though many of my patients require general anesthesia to have an MRI because they can’t control their movements and lie still. Our adult Radiology Department at Columbia has performed MRIs on so many of our patients that the radiologists have become very skilled in managing this population.”

Due to the high prevalence of documented CSS in the adult cohort (7.5 percent), which the researchers believe is underestimated, they recommend active X-ray screening for CSS in patients with CP over age 50, and for patients with dyskinetic syndromes (i.e., athetosis) over 40 years old.

“The problem is not that we’ve identified a disease for which there is no treatment; we’ve identified a degenerative process that just isn’t detected. Dr. Riew and his colleagues have very effective surgical treatments for this condition and a very high success rate,” says Dr. Roye.

There are two surgical approaches often used in patients with CSS. “One is to go into the anterior cervical spine and remove the discs and then put in spacers and bone grafts to achieve fusion, motion, and to correct deformity that occurs in the cervical spine,” says Dr. Roye. “In the posterior approach, the surgeon enters through the back to take the lamina off and replace it in a way that will allow the spinal cord to breathe. While it is somewhat more difficult to perform these procedures in patients who are spastic or who have a movement disorder, it absolutely can be done, and it can be life-altering for them.”