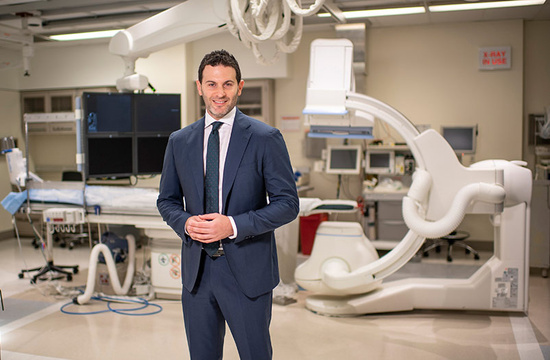 By 2030 it is predicted that approximately 60,000 new cases of chronic subdural hematoma (SDH) will be diagnosed each year in the United States, making it the most prevalent cranial neurosurgical condition among adults. Most often occurring in patients age 60 or older with brain atrophy, these liquefied clots can occur from even minor head trauma resulting in a slow accumulation of blood that can become quite large before causing symptoms. Other risk factors include blood thinning medications and long-term alcohol use.

“Essentially, the way we’ve treated subdural hematoma in the past is through burr holes or a craniotomy to remove the hematoma and cauterize the membranes to stop the bleeding,” says Jared Knopman, MD, a neurosurgeon and interventional neuroradiologist in the Weill Cornell Brain and Spine Center. “But we can only cauterize the membrane that we see. A subdural hematoma can encompass half of the skull, and we only open up a small part to drain the blood. Also, roughly 15 to 20 percent will recur because these membranes continue to ooze in the area that you can’t shut down. In some studies, as high as 33 percent of patients will require retreatment after evacuation.”

Given the generally advanced age and medical comorbidities of the patient population, Dr. Knopman was committed to finding a minimally invasive treatment to address this common yet complex condition. In 2017, he developed a groundbreaking technique to treat subdural hematoma – middle meningeal arterial (MMA) embolization – using angiography, selective microcatheterization of the MMA, and infusion of polyvinyl alcohol particles. The success of this approach has upended prior medical understanding of subdural hematomas.

(A) Common configuration of the middle meningeal artery with a common trunk that divides into frontoparietal (1) and squamosal/temporal (2) branches. (B) With this configuration, embolization can be performed with the microcatheter tip proximal to the bifurcation of these branches to achieve safe embolization of the maximal amount of dura.

“We always believed that subdural hematomas were purely venous problems,” he says. “The fact that arterial embolization can cure this pathology shows that arteries play a major role in their development. This is a new finding that contradicts nearly 50 years of education and assumption.”

“The fact that arterial embolization can cure this pathology shows that arteries play a major role in their development. This is a new finding that contradicts nearly 50 years of education and assumption.”

Dr. Knopman began performing MMA embolization at Weill Cornell in 2017, the first physician worldwide to implement this approach as a first-line alternative to surgical drainage. Since then he has performed more than 300 procedures, avoiding surgery in over 90 percent of patients who previously would have met criteria for surgery. “MMA embolization has now become the standard of care practice at nearly all of the major academic medical centers in the country,” says Dr. Knopman, who has presented this approach and his findings at a number of plenary sessions of key neurosurgical conferences. In the May 2018 issue of Operative Neurosurgery, Dr. Knopman published results of the first known case series of MMA embolization as upfront treatment for symptomatic chronic subdural hematomas that had failed conservative management in lieu of surgical evacuation. Four patients underwent unilateral and one underwent bilateral MMA embolization successfully. All of the patients had significant reduction in the total volume of their SDH at the longest follow-up scan and symptomatic relief with no complications.

Based on those results, Dr. Knopman obtained IRB approval to launch a formal clinical trial of this approach to gather more data, a trial that continues today. In November 2018 in Neurosurgery, Dr. Knopman and Weill Cornell neurology and neurosurgery colleagues described 60 cases of MMA embolization for chronic SDH. MMA embolization was performed successfully on 60 total SDHs in 49 patients, including upfront treatment for new (not previously treated) SDH in 42, for recurrence after surgery in 8, and as prophylaxis to prevent recurrence soon after surgical evacuation in 10. There were no procedural complications. Of the 50 nonprophylactic cases, 4 cases of recurrence required surgical evacuation, and 31 had resolution or reduction in size >50 percent of SDH at the longest follow-up. Overall, 92 percent (41) were decreased in size and the patients were able to avoid surgery.

“We have now been approached by a major industry partner to run a multicenter randomized national trial,” notes Dr. Knopman, who would serve as the national Principal Investigator.

The Weill Cornell Medicine Brain and Spine Center is the principal center in the country where MMA embolization for chronic subdural hematoma is formally being studied and offered.

According to Dr. Knopman, there are two categories of patients to be offered MMA embolization. “The first group is those who meet surgical criteria and who have mild to moderate symptoms – worsening headaches, gait instability, cognitive decline, and very mild weakness, as well as patients who would traditionally get surgery for an enlarging SDH,” he says. “We’re enrolling these patients first as an upfront alternative to surgery.”

The Weill Cornell team is also offering the procedure to patients who must have surgery because at the time of presentation the SDH is too large and they are experiencing significant deficits. “In these cases, we’re using MMA embolization as an adjunct to prevent the SDH from ever coming back,” explains Dr. Knopman. “We’ve found that we’ve knocked those recurrence rates down from 15 to 20 percent to under 4 percent.”

The team has also expanded indications to patients who previously were unable or contraindicated to receive surgery – those on blood thinners or those who have very low platelets due to leukemia or an oncologic disorder. “With this procedure, they don’t need to have the same stringent blood coagulation and platelet requirements that are required for open surgery,” says Dr. Knopman. “Institutions around the country continue to incorporate MMA embolization into their standard of care. This is a testament to its efficacy, but it is also a blessing for patients who are now able to benefit from this procedure.”

“Instead of rushing into invasive surgery – with its associated complications, risks, and costs – for a relatively common cranial disease in the elderly, we can try a minimally invasive, less risky, less expensive option first,” adds Dr. Knopman. “We can then use the more invasive approach only in the small percentage of patients who don’t respond to MMA embolization. This is a win all around for our patients.”