Investigating the Burden of RSV in Older Adults 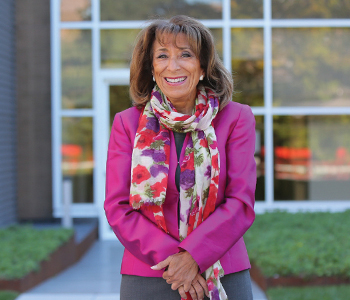 It’s not every day that a pediatrician and a geriatrician come together to study an illness that impacts both the young and elderly. But just such a collaboration is underway at NewYork-Presbyterian/Columbia University Irving Medical Center, where Evelyn C. Granieri, MD, MPH, MSEd, Chief of Geriatric Medicine and Aging, and Lisa Saiman, MD, MPH, Professor of Pediatrics and Hospital Epidemiologist at NewYork-Presbyterian Morgan Stanley Children’s Hospital, are studying the clinical impact of respiratory syncytial virus (RSV), a common respiratory virus that can be especially serious in both populations.

In 2017, Dr. Saiman received a grant from Merck to investigate laboratory-confirmed RSV in hospitalized adults to evaluate both the clinical implications and change in functional status associated with the virus. “What is so novel about this project is having a physician investigator in pediatrics working on something that’s so important to a geriatric cohort. Dr. Saiman has the knowledge and experience to lead this research effort,” says Dr. Granieri.

“I’ve been involved in clinical research for over 25 years,” says Dr. Saiman, “and have been interested in respiratory viruses throughout a great deal of my career.” 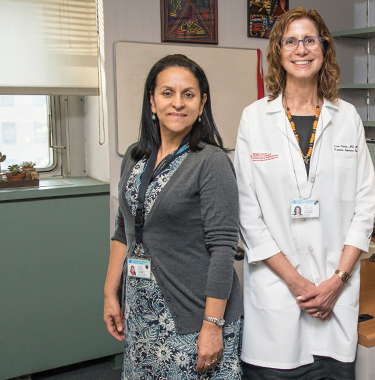 RSV occurs each year in the late fall and early winter. Most otherwise healthy individuals develop mild, cold-like symptoms. However, RSV is the most common cause of bronchiolitis and a common cause of pneumonia in children less than one year of age in the U.S. There is no vaccine and no anti-viral medications for RSV. While once considered primarily a pediatric concern, the virus is now understood to be a cause of significant morbidity and mortality in older adults and can cause exacerbations of underlying cardiac and pulmonary disease. “We’ve known that RSV occurs very commonly in children; in fact, nearly everyone has had an RSV infection by age 3 years. However, until recently, the impact of RSV wasn’t fully appreciated in adults,” says Dr. Saiman.

According to the Centers for Disease Control and Prevention, RSV circulates along with many other winter respiratory viruses, most notably seasonal influenza, and is estimated to cause 177,000 hospitalizations and 14,000 annual deaths in adults age 65 years and older in the U.S.

While the clinical symptoms of RSV are nonspecific and can overlap with other viral respiratory infections, as well as some bacterial infections, there are several laboratory tests available to confirm RSV infection. NewYork-Presbyterian Hospital uses the commercially available multiplex PCR (polymerase chain reaction) panel test, which seeks to detect specific sequences that are unique to 18 viruses, one of which is RSV, and three bacteria that cause respiratory tract infections. It is simple to perform as it only involves swabbing the inside of the nose.

“Until the advent of the multiplex PCR, we didn’t have the tools at our disposal to readily identify RSV in populations outside of young children,” says Dr. Saiman. “Thanks to this simple test, we can actively look for RSV when patients arrive in our emergency rooms. Unlike influenza, for which we know that year to year a certain proportion of people will get infected, infection with RSV is less well-understood because people have not been looking for it until quite recently.”

"I want physicians to understand that RSV exists, it’s serious, and it can have significant repercussions. If the study raises their consciousness to screen patients who are having exacerbations of respiratory illness and to test for viruses through PCR, then I think we will have done some good.”

As an infectious disease specialist, Dr. Saiman says she is very focused on the precision of diagnosis. “It’s incredibly helpful for the emergency room providers to know which hospitalized patients have flu or RSV – as flu has a specific medication – and who need to be placed on specific kinds of precautions,” she says. “For RSV-infected individuals, hospital staff need to wear gowns and gloves to protect themselves, but also to protect their clothing because RSV is highly contagious and very hardy. It can live on environmental surfaces for two to six hours, and it can live on unwashed hands for up to an hour. In contrast, for influenza-infected individuals, hospital staff need to wear surgical masks to protect themselves from getting sick.”

NewYork-Presbyterian/Columbia is collaborating on the RSV study with Drs. Edward Walsh, Anne Falsey, and Angela Branche in the Division of Infectious Diseases at the University of Rochester in Rochester, New York. “The clinicians at our sister study site in Rochester were among the first to appreciate that RSV had a very large burden in the older adult,” says Dr. Saiman. “Determining that burden will help inform the efforts to develop a vaccine. We really want to understand the number of people who have RSV infections and, importantly, in older adults, defined in this study as 60 years of age and older, what is the impact on their functional status. When people who are 60 years of age and older are hospitalized for any reason, they can lose some of their functional abilities related to activities of daily living – simple things like dressing, feeding, and grooming, as well as more complicated tasks such as managing transportation, banking, and shopping. We were interested in learning if functional status is impaired secondary to an RSV-related hospitalization, and if so, how long does functional status impairment last?” The study team is following participants for six months.

“This was the first study ever to look at the loss of function status due to RSV,” continues Dr. Saiman. “Loss of functional status has been looked at before for influenza in older adults, but not for a prolonged period of time.”

Angela E. Barrett serves as the project coordinator for the Columbia site, involved in recruiting patients, administering the surveys to assess functional status, and monitoring their function status over time. The surveys asked how a patient was functioning two weeks prior to hospitalization and functioning at discharge. “Angela then followed up with patients at two months, four months, and six months after discharge to see how they were doing,” adds Dr. Saiman.

The first year of the RSV study was completed in April 2018, with preliminary results presented in a poster session during ID Week this past October. The study included adults 18 years or older who were hospitalized between October 2017 and April 2018 for at least 24 hours and confirmed to have RSV. The subjects resided in two catchment areas: Rochester, New York, and New York City. Eighty-six participants 60 years or older underwent a functional status evaluation. Of the nearly 3,500 adults hospitalized with an acute respiratory infection, 310 were positive for RSV, 216 of these were 60 or older, and 86 were enrolled in the functional status assessment.

The preliminary findings of the study concluded that “older adults hospitalized with RSV infection demonstrate acute functional decline, which may result in prolonged loss of function in some patients.” The mean Activities of Daily Living (ADL) score was significantly decreased at discharge, resulting in 19 percent of subjects requiring a higher level care after hospitalization. And at six months, mean ADL scores remained significantly decreased from baseline suggesting prolonged and sustained loss of function in 37 percent of participants.

“Older adults, and especially those who are hospitalized with RSV, tend to be a unique and growing population of people who have significant comorbidities,” says Dr. Granieri. “I think that many physicians don’t understand that the functional status of older people who are hospitalized actually declines both as a product of hospitalization because they’re not active while in the hospital, but also as a consequence of RSV and other viral infections. Specifically, we do notice anecdotally with RSV that people tend to not do so well with regard to either maintaining function afterwards or recouping their functional status as they’re recovering from RSV. You don’t snap back. The study showed us more precisely how much that ‘snap back possibility’ happens or doesn’t happen.”

“I think we’re also starting to appreciate that there is a relatively high rate of rehospitalization within a month after discharge,” says Dr. Saiman.

In addition to a focus on functional status, another substudy is looking at people who have a worsening of their cardiac or pulmonary function. “These are individuals with COPD, congestive heart failure, and asthma. We want to see if those exacerbations are kicked off by RSV,” says Dr. Saiman.

“I want physicians to understand that RSV exists, it’s serious, and it can have significant repercussions,” adds Dr. Granieri. “If this study raises their consciousness to screen patients who are having exacerbations of respiratory illness and prompts them to test for viruses through PCR, then I think we will have done some good. Additionally, we hope our findings will help us to understand the consequences of RSV and encourage efforts to find a vaccine that would be effective.”