On the Frontlines of Cochlear Implant Research

The Department of Otolaryngology — Head and Neck Surgery at NewYork-Presbyterian/Columbia University Irving Medical Center is advancing the field of cochlear implantation through a dynamic and expanding clinical and research program. “Our Cochlear Implantation Program has grown tremendously in the last four years,” says Lawrence R. Lustig, MD, Otolaryngologist-in-Chief. “In 2014, we were doing under 15 cochlear implants a year, and this year we are approaching 100.”

A vibrant research agenda is also a top priority of the Cochlear Implant Program. “We are involved in many areas of cochlear implant research, ranging from outcome measures, genetic causes of hearing loss, and quality-of-life changes, including the effect on cognitive function, to sound and music appreciation,” says Dr. Lustig. “We also have devised methods for inserting implants without damaging the cochlear tissue and are working with colleagues at Columbia Engineering and at Harvard to develop a fully implantable cochlear implant.”

Following are a just a few of the investigations underway. 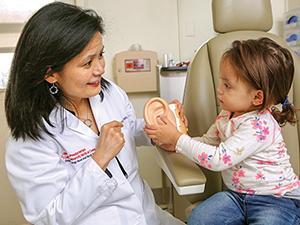 Clinician-scientist Ana H. Kim, MD, is Director of the Cochlear Implantation Program and Director of Otologic Research at Columbia. In her practice, she cares for a growing population of children and adults who can benefit from cochlear implants. She has implanted the device in patients from 9 months to 93 years old. “As long as the infant physically weighs enough to undergo a 1½-hour general anesthesia procedure, we will implant them because the sooner they get the cochlear implant the better they do,” says Dr. Kim. “My older patients are generally in their 60s, but as long as they can undergo general anesthesia, are mentally able to understand and use this technology, there really are no exclusion criteria per se. It’s determined on a person-by-person basis.”

“When we implant patients with profound hearing loss, some will do really well and there are those who do not,” notes Dr. Kim. While the clinical outcomes of cochlear procedures generally bring Dr. Kim great satisfaction, she knows that much more can be done, which has led her to pursue several avenues of inquiry in her basic research lab.

Many of Dr. Kim’s investigations are focused on prolonged hearing loss and what occurs in the brain’s auditory center, which is responsible for sound and speech processing. “We want to have a better understanding at the molecular level,” says Dr. Kim, who is studying the central auditory pathway using a mouse model. “We want to identify the neurons and cells responsible for ultimately interpreting the electrical signals the brain uses to process sounds, and determine what kind of mediators are killing them versus those that are important to sustain their survival?”

Dr. Kim and her research team are also collaborating with physicians in the Division of Nuclear Medicine at Columbia looking at the possible restructuring of the brain and the cells that are being activated. “Our work involves a nuclear medicine tracer,” says Dr. Kim. “So far, the mouse model is showing that this tracer is being picked up in the auditory centers for hearing. We need sufficient mouse data before we can go on to a clinical trial. This is a perfect example of basic science translating into clinical applications.”

“Along the same lines,” continues Dr. Kim, “not only are we looking at functional imaging with the nuclear medicine team, but we’re also working with the Neuroscience Department studying single cell RNA analysis to see what genes are being turned on or turned off with prolonged hearing loss or noise-induced hearing loss. If we know what’s happening at the RNA level, or at the cellular-molecular level, are we going to be able to finesse why some people with prolonged hearing loss don’t do as well. If we can somehow switch certain genes or molecules that are needed to enhance the auditory pathway, perhaps we can open the door for those who’ve had hearing loss for five or 10 years.” 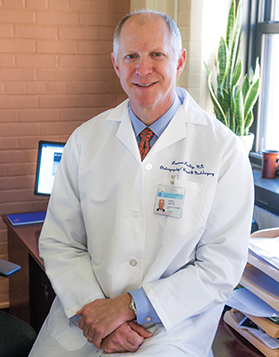 Dr. Lustig and his Columbia colleagues are currently establishing a protocol to perform next-generation sequencing on all of the program’s cochlear implant patients aimed at identifying genetic factors that cause hearing loss. “About 100 different single gene mutations have been identified that will lead to hearing loss, and we think there may even be 150 to 200,” says Dr. Lustig. “There are still many genes to be identified. Add to this the need to understand the subtle differences between multiple genes or duplications or deletions. Traditional genetic screening might miss these. To address this challenge, we are partnering with Dr. David Goldstein and Columbia’s Institute for Genomic Medicine to perform whole-exome sequencing on all of our implant patients who have agreed to be sequenced.”

Dr. Lustig notes that data suggest that certain genetic mutations are associated with better outcomes in patients with cochlear implants. “If someone has a genetic mutation that we think will negatively impact implant performance, we can at least have that discussion with the family at the time of implant or even beforehand,” he says.

“We are at a stage where we have a number of different animal models for testing genetic forms of hearing loss — some of which we can treat.”

To date, the researchers have sequenced some 50 patients and are preparing to sequence the next 50 patients. “When we reach about 150 we believe we will have enough of an aggregate body of data to do a deep dive and draw some conclusions,” he says. “Ultimately, this should be a consideration for all cochlear implant candidates so we will be able to identify who is going to need some more support. When we do develop treatments in the future for genetic forms of hearing loss with gene therapy, I believe sequencing is going to be mandatory.”

Dr. Lustig is encouraged by the wealth of research underway today in the field of genetics and hearing loss. “We are at a stage where we have a number of different animal models for testing genetic forms of hearing loss — some of which we can treat. These early phase studies will help get us where we need to be. Also, a number of new biotech startup companies focusing on hearing loss are entering the hearing space. The field is on their radar, where just 10 years ago it was not. In fact, we’ve just started an international society that focuses specifically on molecular treatments for hearing loss. A lot is happening now.”

Enhancing the Enjoyment of Music 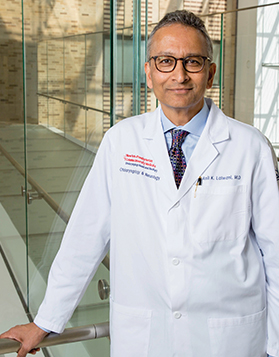 Despite excellent performance in speech discrimination, appreciation of music among cochlear implant listeners remains poor. “Before an implant, patients might get zero percent of the words right and after receiving the implant, they might get 80 percent right,” says Anil K. Lalwani, MD, Co-Director of the Cochlear Implant Program and Chief of Otology, Neurology, and Skull Base Surgery. “However, in a similar music perception test, which may include identifying a note, an instrument, or a piece of music, they may get zero to 15 percent correct.”

According to Dr. Lalwani, diminished music appreciation has been attributed to low resolution and skewed mapping of transmitted frequencies through the cochlear implant. “A person needs only five or six electrodes — distinct points of stimulation within the cochlea — to understand speech,” he says. “You probably need hundreds to do the same for music. The fine temporal information needed is missing and I believe there are several possible reasons why.”

Dr. Lalwani suggests there may not be enough receivers to handle all the information that cochlear devices are able to communicate, or perhaps the speech processing strategies aren’t suited for music. “The third possibility, and my assumption, is that it is unrealistic to expect a deaf individual with a cochlear implant to perceive music in the same way as a normal-hearing person. The normal-hearing person has 100 percent of neurons, whereas the deaf individual with the cochlear implant may only have 20 to 30 percent.”

Over the last six years, Dr. Lalwani and his colleagues have sought to identify how the complexity level of music can be altered in order to generate a more enjoyable listening experience for the cochlear implant user. “Focusing on vocals, instruments, musical complexity, reverberation, and harmonics, we are seeking to identify what aspect of musical input is important,” he says. “Our hypothesis is that re-engineering the original piece of music to better reflect the aspect that the listener likes or dislikes will lead to heightened musical enjoyment.”

To aid in their investigation, the American Academy of Otolaryngology — Head and Neck Surgery awarded a grant to resident Tiffany Peng, MD, and the Columbia team to conduct a study with a sound/audio engineer and a web developer to create a novel web-based application that enables a cochlear implant listener to adjust and tweak the music to enhance their enjoyment of it. The researchers recruited cochlear implant listeners to mix the audio for a song, adjusting treble and bass frequencies, percussion emphasis, and reverberation. The team concluded that the user-directed modifications were more enjoyable than preset modifications and that music re-engineering provides the flexibility to further optimize music enjoyment.

“Our long-term goal is to design an app that will allow one to stream music through it with those adjustments,” says Dr. Lalwani. “It would have the potential of helping every cochlear implantee in the world enjoy music — and that’s about a quarter million people now.”