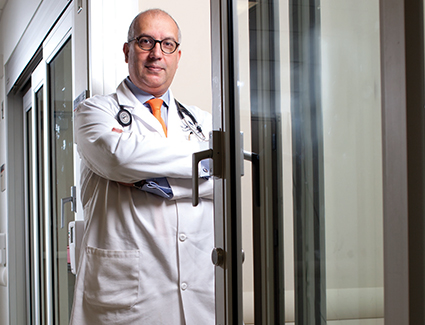 Just six years ago, Markus Y. Mapara, MD, PhD, joined NewYork-Presbyterian/Columbia University Irving Medical Center to build a clinical and translational oriented blood and marrow transplant (BMT) and cell therapy program from the ground up. This has included the recruitment of several new faculty including, in 2015, Ran Reshef, MD, to lead the clinical research efforts as Director of Translational Research for the BMT program, and, in 2017, Pawel Muranski, MD, to focus on the in-house development of cellular therapies as Director of Cellular Immunotherapy.

“We now have four transplant faculty members – three of whom have their own laboratories in the Columbia Center for Translational Immunology (CCTI) directed by Dr. Megan Sykes. Dr. Sykes founded the CCTI in 2010 and is a pioneering researcher in hematopoietic cell transplantation and organ allograft tolerance induction,” says Dr. Mapara. “Our program is well integrated with the CCTI and we closely collaborate with each other and with Dr. Sykes.”

Today, the Adult Blood and Marrow Transplant Program has undergone a rapid expansion and offers the full array of treatment options. These range from autologous to allogeneic and haplo-identical transplantation for patients with benign conditions, such as sickle cell disease, and malignant hematopoietic disorders, including multiple myeloma, leukemia, and lymphoma.

A Steadfast Focus on Graft-versus-Host Disease

Dr. Mapara and his colleagues are also at the forefront of studying new approaches to making transplant safer and more effective and methods to induce immune tolerance.

Graft-versus-host disease (GVHD) is one of the most common and serious side effects of allogeneic bone marrow transplant. “In solid organ transplant, the major risk is that the recipient rejects the graft from the donor. In BMT, the donor cells attack the recipient’s tissue,” says Dr. Mapara. “However, the ability of donor cells to react against the foreign tissue of the recipient can also be harnessed to attack the underlying malignancy of the patient. One area of my active research is to separate GVHD from graft versus leukemia [GVL] effect. The hope is to maintain the anti-tumor response, but also try to mitigate or possibly prevent the response of the donor cells against the normal tissues. One of the fascinating aspects of bone marrow transplantation is that if things go well, true tolerance develops and patients can be taken off immunosuppressants. Eradicating graft-versus-host disease is crucial because it would allow us to also use stem cell transplantation as an adjuvant to solid organ transplant to induce long-lasting and permanent tolerance.”

“The environment at Columbia is unique as it allows us to conduct bench-to-bedside studies and then take clinical observations back to the bench to perform in-depth mechanistic studies.”

According to Dr. Mapara, the concept of using bone marrow for the induction of tolerance dates back three to four decades. “Drs. David Sachs and Megan Sykes of the CCTI were pioneers in developing this concept. In close collaboration with Dr. Sykes and Dr. David Cohen, Director of the Kidney Transplant Program at NewYork-Presbyterian/Columbia, we have a clinical protocol in which the patients receive a combined kidney and bone marrow transplant from the same donor. In addition, we are planning to add regulatory T cells – which modulate the immune system – following the combined kidney and bone marrow transplant to enhance the development of donor cell engraftment and tolerance induction,” says Dr. Mapara. “These clinical trials will soon be ready to begin in patients.”

Dr. Mapara seeks to further advance this approach through research he is pursuing in his laboratory to identify molecular switches that could turn off GVHD. “By finding potentially druggable targets, we could use a drug to suppress or prevent GVHD without blunting the anti-malignancy or GVL effect in patients with blood cancers. One signaling pathway we are particularly interested in is interferon/JAK/STAT1,” says Dr. Mapara. “A number of years ago, we found in mouse models that if you block the STAT1 pathway in donor cells, you are able to significantly reduce or even prevent GVHD. This was associated with the expansion of regulatory T cells. We are at the moment trying to understand in more detail in mouse models how to better manipulate that approach and how this will affect the anti-tumor response in the human setting.”

To accomplish this, Dr. Mapara and his colleagues are moving from using pure mouse models to working with humanized mouse models – the next step closer to clinical studies. “We are taking a certain strain of mice that are highly immunosuppressed, which allows us to establish a human blood system in these mice,” he says. “There is clear evidence that the interferon signaling the JAK/STAT pathway plays a significant role, not only in mice, but also in humans in terms of GVHD.”

The initial mouse studies from the Mapara laboratory have been recently confirmed by early clinical trials, which demonstrated that small molecular drugs inhibiting the JAK1/2 molecule (which is upstream of STAT) are active in patients with GVHD. “Based on our own studies and with the goal of further enhancing outcomes, we are now initiating a clinical trial that will focus on targeting JAK1 together with another key pathway, the IL-6 signaling pathway, in patients with steroid refractory GVHD,” says Dr. Mapara.

“The environment at Columbia is unique as it allows us to conduct bench-to-bedside studies and then take clinical observations back to the bench to perform in-depth mechanistic studies,” adds Dr. Mapara. “By establishing the hematopoietic system of the patient and their cancers in mice, we can dissect these pathways and determine how they impact the development of GVHD or even GVL in a personalized approach. We expect that our pre-clinical studies will allow us to further refine our hypotheses and provide the rationale for new clinical trials.”

A Comprehensive Program in Cellular Immunotherapies 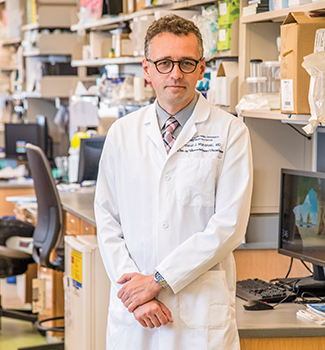 Scientific innovator and hematologist Pawel Muranski, MD, gained expertise in cell-based immunotherapy of cancer at the Surgery Branch of the National Cancer Institute and the National Institutes of Health, where he performed pioneering studies aimed at understanding the role of CD4+ T cells as mediators of curative anti-tumor immunity. Prior to joining Columbia, Dr. Muranksi served in the Hematology Branch of the National Heart, Lung and Blood Institute at the NIH. There his research focused on using T cell-based therapies to prevent viral infections in patients under-going donor-based stem cell transplant­ation for blood cancers and to treat other patients who developed life-threatening infections as a side effect of their anti-cancer therapies.

As head of the new Cellular Immunotherapy Laboratory in Columbia’s Good Manufacturing Practices (GMP) cell production lab, Dr. Muranski notes, “Developing a comprehensive program in cellular immunotherapies is a complex endeavor. Despite recent spectacular advances in the field of cancer immunotherapy, relatively few institutions have GMP laboratories with the capacity to grow and manipulate T cells. Our plan is to manufacture clinical grade immune cells based on the research taking place here at Columbia, as well as in the labs of our collaborators.”

“It takes a major organizational effort to manufacture clinical grade cells that the FDA would allow to be given to our patients,” continues Dr. Muranski. “There are many regulations and quality standards that we have to meet to be able to conduct investigator-initiated clinical trials here. Typically, new therapeutic agents are based on the research performed by industry and manufactured by pharmaceutical or biotech companies. In our case, we will be developing our own equivalent of the industrial product, but we’ll be making it here on site.”

The initial goal of Dr. Muranski and his team is to manufacture a relatively simple cell product that will allow them to gain logistical expertise. “Once we have all of the elements in place and are certain that all of those elements function, we’ll move to more complex cell products aimed at more difficult targets and with a higher degree of manipulation,” he says.

The first protocol in development will mirror the work that Dr. Muranski had begun at the NIH. “There is a huge clinical need for developing treatments for refractory viral infections. So, we’re going to manufacture the T cells that recognize the common viruses that affect immunocompromised patients following bone marrow transplant and solid organ transplant,” says Dr. Muranski. “This protocol will aim at rebuilding the patient’s immune system immediately after the bone marrow transplant when the patient is most vulnerable with the type of cells that will prevent the occurrence of infection rather than waiting for the infection to happen.”

The researchers will also develop treatments for common refractory infections that will be applicable for all critically ill immunocompromised patients regardless of the underlying cause. “Next steps will involve the development of more ambitious projects that will target cancer antigens with novel treatments for common cancers using our in-house-developed methodologies,” says Dr. Muranski. “That will include gene engineering and other sophisticated manipulations.”

“Cellular immunotherapy has revolutionized how cancer patients are being treated,” adds Dr. Muranski. “This is a completely different approach to treatments. It can be labor intensive, as every type of personalized medicine is, but it is lifesaving and offers the potential for a cure.” 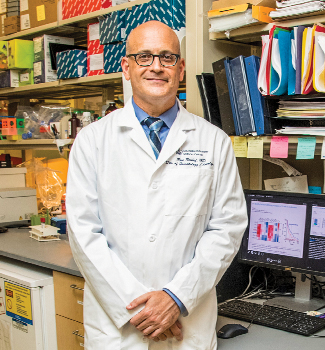 As Director of Translational Research for the BMT program, Dr. Ran Reshef oversees the clinical research efforts of Columbia’s blood and marrow transplant and cell therapy program. “While the major success stories involving CD19 targeting CAR-T cells in B-cell malignancies, for example, non-Hodgkin lymphoma and acute lymphoblastic leukemia, are turning some incurable diseases into curable ones,” says Dr. Reshef, “this represents only a small proportion of all cancers. We still have a very large field of different types of tumors and targets that are a major focus of clinical research in oncology.”

At Columbia, Dr. Reshef and his colleagues are applying the latest CAR-T cell therapies in patients with aggressive lymphomas. “We are now opening a number of clinical trials looking at these therapies for other types of cancers, including indolent lymphomas and myeloma,” notes Dr. Reshef. “The expectation is that this field, at least on the clinical research side, will expand dramatically over the next decade. At the same time, the number of companies and academic institutions that are developing these cell approaches is also expanding. We are in an era where there are a lot of exciting developments in cancer therapy in general and in bone marrow transplants specifically. Every day we wake up to new publications, new clinical trials, and new medications getting approved for the treatment of cancer. And every day, we can offer better treatments than we could the day before.”