In Study, TAVR is Superior to Surgery for Low-Risk Patients with Aortic Valve Stenosis

Patients had a 46 percent lower risk of death, stroke, or rehospitalization when their aortic valve was replaced via a catheter instead of with open-heart surgery.

A multicenter clinical trial has found that transcatheter aortic valve replacement (TAVR) performed better than open-heart surgery in low-risk patients with severe aortic stenosis. The study found that one year after the procedure, the rate of death, stroke, or rehospitalization was significantly lower with TAVR than with surgery.

The results were presented during the late-breaking clinical trials session at the American College of Cardiology Conference in New Orleans and were simultaneously published online in the New England Journal of Medicine.

“When TAVR was introduced, it was regarded as an alternative for patients who were too sick to undergo open-heart surgery. Today’s findings suggest that TAVR may be superior to surgery, even for patients with low operative risk,” said Martin B. Leon, MD, a professor of medicine at Columbia University Vagelos College of Physicians and Surgeons, director of the Center for Interventional Vascular Therapy at NewYork-Presbyterian/Columbia University Irving Medical Center, and principal investigator of the trial.

An estimated 5 million adults in the U.S. have aortic stenosis — a buildup of calcium in the aortic valve that can lead to heart failure. Patients previously had to undergo open-heart surgery to have the valve replaced. But many who most needed valve replacement were too sick or frail to undergo surgery.

For nearly a decade, TAVR has provided a less invasive option for these patients. In TAVR, doctors thread a catheter through an artery in the groin and into the heart so that a new aortic valve can be fitted inside the diseased valve without surgically opening the chest.

As many as 400,000 patients around the world have had TAVR since it was first introduced in the mid-2000s. 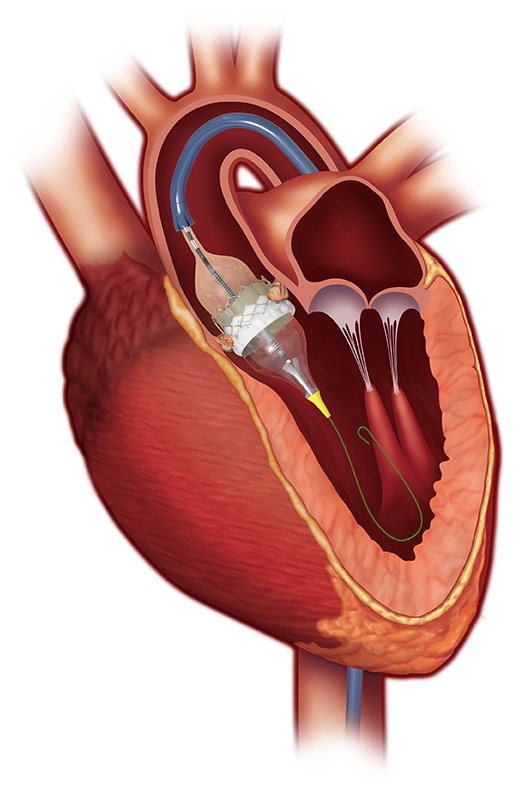 The first PARTNER (Placement of AoRtic TraNscathetER) trial, published in 2010 and led by Leon, found that the procedure dramatically reduced the risk of death among inoperable patients — less than 10 percent of those with severe aortic stenosis — compared to those managed medically; in subsequent PARTNER trials, published in 2011 and 2016, TAVR was also found to be effective for patients with high- and intermediate-risk of death or serious complications from surgery.

But researchers did not know how TAVR would compare to surgery in the vast majority of patients who are considered good candidates for open surgery. In the new study, PARTNER 3, the researchers enrolled 1,000 patients from 71 centers with severe aortic stenosis and an operative risk of less than 2 percent (surgical risk of less than 4 percent is considered low). The patients were randomized to have TAVR with the SAPIEN 3 balloon-expandable valve or surgical aortic valve replacement.

At one year after the procedure, 42 patients (8.5 percent) in the TAVR group had died, had a stroke, or were hospitalized for a heart-related problem or surgical complication compared with 68 patients (15.1 percent) in the surgery group, a 46 percent reduction.

“The main limitation of the study is that the current results reflect outcomes after one year, which isn’t long enough to assess the long-term durability of the replacement valve,” said Leon.  “Patients in the study will be followed for at least 10 years so that we can measure their long-term outcomes and inform the medical community.”

The paper is titled, “Transcatheter Aortic-Valve Replacement with a Balloon-Expandable Valve in Low-Risk Patients,” and was published online in the New England Journal of Medicine.

The trial was funded by Edwards Lifesciences.

Disclosures for the Columbia University Irving Medical Center and NewYork-Presbyterian authors can be found online in the journal.

Columbia University Irving Medical Center provides international leadership in basic, preclinical, and clinical research; medical and health sciences education; and patient care. The medical center trains future leaders and includes the dedicated work of many physicians, scientists, public health professionals, dentists, and nurses at the Vagelos College of Physicians and Surgeons, the Mailman School of Public Health, the College of Dental Medicine, the School of Nursing, the biomedical departments of the Graduate School of Arts and Sciences, and allied research centers and institutions. Columbia University Irving Medical Center is home to the largest medical research enterprise in New York City and State and one of the largest faculty medical practices in the Northeast. For more information, visit cuimc.columbia.edu or columbiadoctors.org.

NewYork-Presbyterian is one of the nation’s most comprehensive, integrated academic healthcare delivery systems, whose organizations are dedicated to providing the highest quality, most compassionate care and service to patients in the New York metropolitan area, nationally, and throughout the globe. In collaboration with two renowned medical schools, Weill Cornell Medicine and Columbia University Vagelos College of Physicians and Surgeons, NewYork-Presbyterian is consistently recognized as a leader in medical education, groundbreaking research and innovative, patient-centered clinical care.