The biology of tumor growth has long been a mystery. While it has been known that tumors recruit cells to form new blood vessels—a process called angiogenesis—and that growth factors are necessary to promote this, the origin of the cells that form the early, new blood vessels has been poorly understood.

Tumor tissue releases angiogenic factors such as VEGF (Vascular Endothelial Growth Factor) that promote the mobilization of VEGFR1+ Hematopoietic Precursors (blood cells) and VEGFR2+ Endothelial Precursors (vessel wall cells) from the bone marrow to the tumor vasculature. Thus, tumor angiogenesis has, for the first time, been shown to be dependent upon the mobilization and recruitment of bone marrow precursor cells. This lays a therapeutic foundation to target bone marrow precursors for the treatment of specific tumors (such as lymphoma, leukemia, lung cancer). Image courtesy of Drs. S. Rafii, D. Lyden, R. Benezra 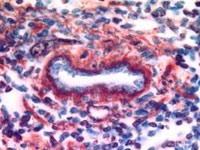 In a lymphoma tumor, a tumor blood vessel (center) is shown with its vessel wall endothelium (lined in blue). The blood cells, co-mobilized with the endothelial cells (shown as brown cells), help with the formation of blood vessels. The endothelium and the blood cells were derived from the bone marrow, thereby demonstrating that angiogenesis, the formation and growth of tumor blood vessels, is partly dependent upon endothelial (vessel) cells and blood cells recruited from the bone marrow. Image courtesy of Drs. S. Rafii, D. Lyden, R. Benezra

Now, researchers at Weill Medical College of Cornell University and Memorial Sloan-Kettering Cancer Center have discovered that tumor angiogenesis is dependent upon the recruitment and incorporation of bone-marrow-derived precursor cells into newly formed tumor vessels. Vascular Endothelial Growth Factor (VEGF) produced by the tumor cells induce precursor cells from the bone marrow into the tumor vessels.

These findings, published in the November issue of Nature Medicine, suggest new targets for cancer therapies and a possible blood test for cancer. Indeed they also argue for a new paradigm in cancer biology and a significant reconceptualization of tumor growth—namely, that the "whole story" is not in the tumor. In short, prevent the bone marrow stem cells from moving to the tumor, and you block tumor growth.

"This is the first definitive proof that bone marrow contributes to the formation of functional blood vessels of certain tumors," said Dr. Shahin Rafii, a vascular hematologist-oncologist at Weill Medical College of Cornell University and one of the study's lead authors. "It increases our understanding of the mechanism by which anti-angiogenic agents block tumor growth, generating new targets for cancer therapy."

"We hope to be able to apply our findings to cancer patients for diagnostic purposes and for treatment, and are beginning studies to determine the diagnostic potential," said Dr. David Lyden, a Memorial Sloan-Kettering pediatric oncologist and lead author. "There are monoclonal antibodies already developed that can recognize and block mobilized blood cells, preventing tumor growth and metastasis. These are also being studied as possible treatment options."

To identify the origin of cells that contributes to tumor angiogenesis, the researchers wanted to determine if there was a role for bone marrow-derived cells in initiating and maintaining a functioning tumor blood vessel system. Dr. Rafii had previously shown that bone marrow-derived circulating endothelial precursor (CEP) cells are mobilized from the bone marrow to contribute to angiogenesis in wound healing. In addition, findings from an earlier Memorial Sloan-Kettering study by Dr. Lyden and co-author Dr. Robert Benezra demonstrated that two proteins, Id1 and Id3, are necessary to support and sustain tumor angiogenesis. But whether these cells or proteins were also essential for tumor blood vessel formation was not known.

In this study, Id-deficient mice were transplanted with bone marrow cells from donor wild-type mice (normal mice) that were marked with a protein (B-galactosidase+), which allows them to turn blue when stained with a specific dye. Four weeks later, these mice were injected with either lymphoma cells or Lewis Lung Carcinoma cells (lung cancer cell lines). The transplanted mice developed widespread metastasis and died within 26 days, paralleling the tumor growth observed in wild-type animals. Importantly, the blue bone-marrow-derived cells were seen in the vast majority of the vessels formed in the tumors. When the reverse experiment was done—putting Id-deficient marrow back into wild-type mice—there was a dramatic delay in the growth of the tumor. This clearly showed that the bone-marrow-derived cells could promote the formation of new blood vessels by tumors and are probably also required for their formation.

These findings raised the issue of which specific cells in the bone marrow are responsible for early angiogenesis. To determine this, the researchers tracked the bone marrow cells labeled with B-galactosidase+. A few days after the engraftment, bone marrow cells identified as circulating endothelial precursor (CEP) cells by the blue enzymatic reaction to B-galactosidase+ became incorporated into the lining of tumor blood vessel cells. These cells expressed one of the VEGF receptors, VEGFR 2, that is critical for the growth and survival of these cells. An unexpected finding was that hematopoietic precursor (blood) cells were also found to contribute to the formation of the blood vessel walls. These expressed a different VEGF receptor, VEGFR 1.

So what is the role of VEGF in signaling bone marrow-derived precursor cells, and is it necessary and sufficient for new tumor angiogenesis? This study found that increased VEGF levels in the blood of wild type mice with tumors caused VEGFR1+ hematopoietic (blood) cells and VEGFR2+ circulating endothelial precursor (vessel) cells to move into circulation and create early blood vessels. Tumors were then targeted either with neutralizing monoclonal antibodies to VEGFR1 alone; with monoclonal antibodies to VEGFR2 alone; or to both. The targeting of either VEGFR1 or VEGFR2 partially blocked the growth of tumors. However, it was necessary to inhibit both VEGFR1 and VEGFR2 to completely block tumor formation. VEGFR1+ hematopoietic cells and VEGFR2+ circulating endothelial precursor (CEP) cells were mobilized in wild-type mice but not in the Id deficient mice.

"This study provides further indication of the importance of the Id genes in cancer development. They are detected in both cancer cells and in mobilized circulating endothelial cells," said Dr. Benezra, head of a laboratory in the Cell Biology Program at Memorial Sloan-Kettering and one of the study's senior authors. "Presence of these circulating cells is a potential marker for early cancer detection. We hope that this assay could be useful for diagnosing minimal residual disease."

Weill Medical College of Cornell University, founded in 1898, has long ranked among the leading medical schools in the U.S. From the beginning, the Medical College has followed an educational philosophy that combines a strong basic foundation in the medical sciences with extensive and early clinical training in patient care. Under Weill Cornell's innovative Strategic Plan for Research, its physicians and scientists are engaged in both basic and clinical research in the cutting-edge areas of genetics and gene therapy, neuroscience, structural biology, vascular biology, AIDS, cancer, and psychiatry, among many other fields. Together with Memorial Sloan-Kettering Cancer Center and The Rockefeller University, its close neighbors and affiliates on York Avenue, Weill Cornell forms one of the great biomedical complexes in both the nation and the world.

Memorial Sloan-Kettering Cancer Center is the world's oldest and largest private institution devoted to prevention, research, and education in cancer. Its scientists and clinicians generate innovative approaches to better understand, diagnose, and treat cancer. Its specialists are leaders in biomedical research and in translating the latest research to advance the standard of cancer care worldwide.