The old idea of putting foreign-language cassettes under your baby's crib, or playing Mozart on the stereo to help the baby learn, is based on studies that are "largely anecdotal," says Dr. Amir Raz, a fellow of psychology and psychiatry at the Sackler Institute for Developmental Psychobiology of Weill Cornell Medical College. But now, Dr. Raz and 11 Finnish scientists have carried out a rigorous, carefully controlled study that shows that babies less than a week old can learn to distinguish between speech sounds by hearing them while they are asleep. The results, published recently in the journal Nature, are remarkable, if preliminary, he says. While further research is necessary, if the findings are replicated, the study may one day lead to innovations in the nursery. 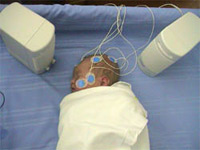 The investigators, led by Dr. Marie Cheour of the Department of Psychology, University of Turku, Finland, studied 45 newborns, all less than one week old. Fifteen were in an experimental group, and 15 were in each of two control groups. The babies had electrodes placed on their scalps, and speakers near their heads gently played a randomized sequence of two similar Finnish vowel sounds as they slept: a "standard" sound, /y/, and a "deviant" sound, /i/.

Through the electrodes, a computer measured something that has been identified by a Finnish scientist, Dr. Risto Näätänen, as "mismatch negativity" (MMN). That is, when the brain hears the standard sound, there is a certain response in the brain, and when it hears the deviant sound, there is another response. Subtracting the responses to the deviant from the responses to the standard produces the MMN. This is an objective measure that shows how well the brain distinguishes between the two sounds, without requiring the subject to perform any behavior (or even to be awake).

The two sounds /y/ and /i/ are difficult for a non-Finnish-speaker to distinguish. In the first, hour-long session, held in the evening, the experimental group and the two control groups all showed no mismatch negativity to the two sounds. Over the following night, for between two-and-a-half and five hours, the experimental group had a "training" session of exposure to the two sounds. One control group did not have this exposure, and the other control group heard two different sounds, /a/ and /e/. Then, in the morning, all three groups underwent another hour-long testing session.

The results were that, after the overnight training, the experimental group showed significant mismatch negativity to the deviant sound. The babies had learned to distinguish between these two vowels in Finnish speech.

The authors write, "We have shown that newborns can assimilate auditory information while they are sleeping, suggesting that this route to learning may be more efficient in neonates than it is generally thought to be in adults."

Dr. Raz says that a big question that remains to be answered is whether this learning while asleep can carry over any effects to the waking state. That is next on the research agenda. He says that it is possible the effect may prove to be like that of a dream in adults—which we experience intensely while we are asleep, but which we often half-forget upon waking up, and which does not have any important effect. But he suspects there will be some carry-over effect.

Another question still to be answered is, up to what age do children retain this ability to learn while asleep? This study is preliminary, but it could lead to several potentially significant consequences.

The Sackler Institute, directed by Dr. Michael Posner, is part of the Department of Psychiatry at Weill Cornell Medical College. Besides Drs. Raz, Cheour, and Näätänen, the authors are Olga Martynova, Risto Erkkola, Matti Sillanpää, Pentti Kero, Marja-Liisa Kaipio, Jaana Hiltunen, Olli Aaltonen, Janne Savela, and Heikki Hämäläinen. Drs. Näätänen and Kaipio are at the University of Helsinki. Drs. Cheour, Erkkola, Sillanpää, and Kero are with University Central Hospital, Turku. Drs. Martynova, Hiltunen, Altonen, Savela, and Hämäläinen are at the University of Turku.