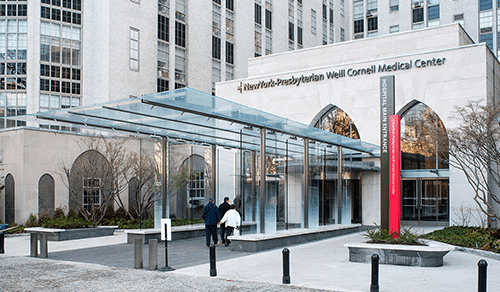 NewYork-Presbyterian/Weill Cornell Medical Center (NYP-WC), formerly known as The New York Hospital prior to merging with The Presbyterian Hospital in 1998, can trace its roots back to colonial New York in 1769 when Dr. Samuel Bard made an appeal to the citizenry of the City of New York for a hospital to serve its expanding population.  Two years later, King George III of England granted a royal charter to the Society of the Hospital in the City of New York.  During the Revolutionary War, the hospital was utilized for the treatment of colonial soldiers wounded in our nation’s struggle for independence.  In 1791, the hospital opened its doors to serve all the people of New York.

In 1932, the Hospital constructed the Payne Whitney Psychiatric Clinic, which was designed to provide a peaceful and gracious environment for the storied members of American society.  In 1976, the world-renowned William Randolph Hearst Burn Center opened.  Affiliated with the New York Firefighters Burn Center Foundation, the Burn Center is one of the largest in the country and its interdisciplinary team has treated thousands of New Yorkers over four decades, including those who survived the 2001 terrorist attack on the World Trade Center.

In August 2020, NewYork-Presbyterian Alexandra Cohen Hospital for Women and Newborns opened. The Cohen hospital is a new state-of-the-art facility that offers the full range of services for before, during, and after childbirth—including specialized prenatal and high-level care for newborns in need of extra support.

In 1799, as a precursor of organized nursing prior to the innovations in the following century led by Florence Nightingale, The New York Hospital course of training for nurses was organized.  In 1877, The New York Hospital training School for Nurses was established on 15th Street in Manhattan, which evolved into The New York Hospital School of Nursing upon the affiliation of The New York Hospital with Cornell University. Notable graduates of the nursing school include Lilian Wald, the founder of VNS; Clara Weeks, the first author of a nursing textbook in the United States; and Julia Stimson, the chief nurse of the Red Cross in France during World War 1.

During the financial downturn in the 1970s, New York State withdrew funding and the nursing school was forced to close.  In the subsequent decades, NewYork-Presbyterian has forged academic affiliations with dozens of notable nursing programs, and today, secondary to a robust financial support mechanism to support professional growth, the nursing workforce is moving towards a united baccalaureate prepared nursing staff with graduate preparation required for all leadership.  Certification programs are offered through NYP’s centralized Division of Nursing Education.

Today, NewYork-Presbyterian is nationally renowned for a number of specialty programs. These include its liver transplantation program, which offers adult living donor transplantation and expanded donor criteria. NYP is the first institution to offer fully laparoscopic living liver donation.  The hospital also has among the highest success rates and the shortest wait time for liver transplants in the country.  The Kidney and Pancreas Transplant Program at NYP-WC, the oldest kidney transplant program in New York State and one of the highest volume programs in the country, is nationally recognized for developing innovative strategies that allow for successful transplants.

NYP-WC is a Level 1 Trauma Center for adults and pediatrics and its Burn Center serves as the regional Burn Center for New York City. The hospital’s emergency services include one of the largest hospital-based ambulance services in the northeast.  The hospital also has a hyperbaric program and major services for stroke care and percutaneous coronary intervention, providing pre-eminent emergency care for all New Yorkers. In 2020, the new Alexandra Cohen Hospital for Women and Newborns opened, providing top-notch care for mothers and neonates.

NYP-WC is also a leader in lesbian, gay, bisexual, and transgender (LGBT) care.  In 2016, NYP was chosen as one of a select group of healthcare organizations to be named a Leader in LGBT Healthcare Equality by the Human Rights Campaign Foundation, the largest LGBT civil rights advocacy group and political lobbying organization in the United States.

Nursing’s unique contribution to NewYork-Presbyterian continues to evolve.  The stated mission of our institution is to provide the community with high quality care that is safe and has as its keystone a commitment to compassion supported and defined by the professional nursing staff.

Percent of RNs with BSN and Higher Degrees

Ms. Hemway partnered with the NYP Strategic Sourcing and Linen Operations departments to facilitate transition to the new pediatric snap gowns. Working with Strategic Sourcing and Linen operations, Ms. Hemway reviewed samples and coordinated the standardization of the product across all NYP sites. The Linen Operations team has oversight of the laundry, restocking and delivery of hospital gowns. They provided feedback on the reliability of the product, particularly the snaps, through multiple wash loads. Ms. Hemway also engaged clinical nurses and PCDs in evaluating the option of 100% plastic snap IV gowns vs. mix of metal snap IV gowns and plastic snap regular gowns. The team also had to ensure that the new pediatric IV snap gowns were MRI safe.

In December 2019, the new product request for MRI safe, pediatric IV snap gowns was approved. Ms. Hemway continued to work with Strategic Sourcing, Linen Operations, and Nursing Professional Development to create a conversion timeline. This involved logistical coordination of changing to the new product and education of the healthcare team. Through interprofessional collaboration and strong nurse leader advocacy, the pediatric team was able to successfully switch to the new MRI safe, pediatric IV snap gowns across all NYP sites.

The R4 Committee partnered with the Ronald McDonald House, a nonprofit organization whose mission is to “create, find and support programs that directly improve the health and well-being of children and their families.” NYP-WC nurses spearheaded a food drive throughout the campus during the month of September. With 29 participating hospital areas, the food drive was a huge success collecting over 1000 items, reportedly the largest donation that Ronald McDonald has received from an organization. The contributions of NYP-WC nurses and organizational support for nurses to be involved in this community outreach initiative will go a long way in assisting children and their families, many of whom are our patients.

During the holiday season, many children receive care at NewYork-Presbyterian/Weill Cornell Medical Center (NYP-WC) in both the inpatient and ambulatory care settings. Some of their families cannot afford buying toys and gifts. Every year, the NYP-WC Child Life Department sponsors “Winter Wonderland” when Child Life Specialists partner with parents to pick gifts that their child, and siblings, will enjoy.  The Night R4 Committee spearheaded a toy collection drive in nursing units and contributed to this year’s Winter Wonderland initiative. The committee requested developmental toys for the targeted age groups. Hundreds of toys were collected from twenty different units. 4 Central, 2 West, 10 South, and the Patient Placement and Operations Center (PPOC) were recognized to have made the most number of toys collected. NYP-WC nurses have made a meaningful difference to our pediatric patients and their families.

Children with asthma have an increased risk for severe complications from flu compared to children without asthma. Flu vaccine compliance for children in the United States has been historically lower than the Healthy People 2020 target. The flu vaccine can protect against asthma attacks, as well the number of emergency room and urgent care visits in children.

The Ambulatory Care Network (A.C.N) HT5 Pediatrics nurses developed a plan to test whether a flu shot reminder call and asthma control screener would increase the percentage of pediatric asthmatic patients who get the vaccine.

Using the CDC age group stratification to compare compliance from 2017-2018 and 2018-2019, the flu vaccine compliance showed significant improvement. The total number of vaccinated increased for all age groups: 6 months to 17 year old, 6 months to 4 year old, 6 to 50, 5-12 year old, 13-17 year old, and ≥18 year-old. The A.C.N. HT5 Pediatric team was able to reach 801 patients in 2018-2019, a significantly higher number compared to 160 in 2017-2018.  This initiative has shown that a flu shot reminder call and asthma control screener can increase the percentage of asthmatic patients who get the flu vaccine during flu season at NYP-WCHT5 Pediatrics

Adequate pupillary dilation is an essential first step of nearly every ophthalmic surgery. It is achieved through the administration of six eye drop vials: three dilation drops, an antibiotic, an anesthetic drop and a topical non-steroidal anti-inflammatory drug (NSAID). The administration process was a significant cause for patient dissatisfaction due to staggered instillation times. In February 2019, the NYP-WC David H. Koch Center Ambulatory Surgery team identified this as an opportunity and developed a plan for improvement.

As a result of this new product and work flow, savings of over twenty minutes in the pre-operative phase and a major cost reduction of $96.00 per case were achieved. From May to December 2019, medication cost savings was an estimated $108,000.00. The 20-minute reduction in procedure time is equivalent to almost 600 hours, increasing patient capacity in the Ambulatory Surgery suite. Patient satisfaction improved from the 80th to the 90th percentile as measured by an internal patient satisfaction survey and the OASCAHPS metrics for pre-operative care.