A collaborative study initiated by Manish A. Shah, MD, Director of WCMC’s Gastrointestinal Oncology program, involving the WCMC Departments of Healthcare Policy and Research and the Department of Surgery gives more insight into the changing face of colon cancer, revealing that while rates of incidence among the target surveillance audience of men and women over 50 have dropped since 2000, patients under 50 are seeing a 1.4% annual increase in incidence.

By comparing patient and tumor characteristics for both groups, certain attributes were discerned for early-onset cases: 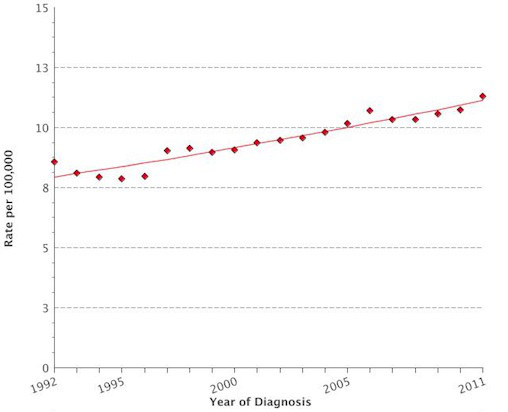 Despite adenocarcinoma remaining the predominant histology for both early-onset (63%) and late-onset (65%) colorectal cancer, signet ring cell carcinomas and mucinous adenocarcinomas are found more often in in early-onset than late-onset. Early-onset patients had larger tumor sizes and higher rates of lymph node positivity and perineural invasion, plus positive surgical margin.

“This is an important study that may elucidate genetic causes for the more aggressive type of colon cancers characteristic of early onset disease. This work can only be accomplished by the close collaboration with multiple involved research groups,” explains Dr. Shah.

A new rising face of colon cancer is a Black or Hispanic male under 50, with cancer in very advanced stages. While this profile does not fit the whole population still affected by the disease, it does represent a population being missed by current screening standards. Research on the pathogenesis of early-onset colorectal cancer may provide more insight to the similarities or differences between early- and late-onset colorectal cancer, which in turn will inform improvements in screening and detection. Drs. Yeo, Zhang, Betel and Shah are continuing to explore additional potential molecular differences between the two groups using TCGA.

VIDEO: Learn more about this study from Dr. Zheng