The diagnosis was startling news to hear, but … it was a relief that I had answers. 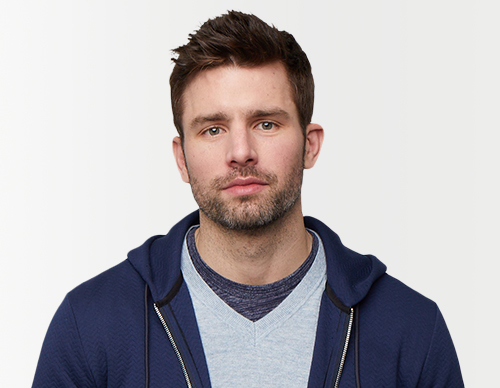 Chris Conroy had been feeling unwell for some time. The 32-year-old TV and film actor began experiencing fatigue and insomnia for a few years, but none of the more than 20 doctors he saw could figure out what was wrong with him.

“I saw a primary care doctor, neurologist, endocrinologist, a naturopath, etc. However, none of them could seem to find anything to hang their hat on,” he says. “Because of my career, they associated it with stress. I thought that can’t be right.”

Chris’ symptoms persisted until July 7, 2018, when he was suddenly struck with a splitting headache that caused him to feel nauseated. Unable to relieve the pain, he went to a local urgent care. At the urgent care, doctors were unsure what was causing his symptoms and recommended he go to the emergency room for care. Chris decided to go home in Park Slope instead, telling himself if he wasn’t feeling better in a few hours he’d go to the hospital.

At 1 AM, feeling worse than before, Chris called a friend who lives in his building to take him to the emergency room at NewYork-Presbyterian Brooklyn Methodist Hospital. At the hospital, doctors began running a series of tests and started a course of pain medication. At about 6 AM, the neurosurgery team came to see Chris.

A head CT scan taken earlier showed a massive growth on the right side of his brain. Chris would need surgery. “It was startling news to hear, but, at the same time it was a relief that I had answers,” he says.

Dr. Michael Ayad, director of endovascular neurosurgery at NewYork-Presbyterian Brooklyn Methodist Hospital, was brought in to review Chris’ case. Dr. Ayad ordered an MRI, which confirmed that Chris had a brain abscess caused by an infection.

Because a brain abscess is a potentially life-threatening condition, Dr. Ayad wanted to remove the mass as soon as possible. Chris had to call his family who lives near Pittsburgh to let them know he’d be having a craniotomy within the hour.

“My parents were in church when I called, so neither of them answered. I called my little brother and told him I’m about to go into brain surgery. Dr. Ayad got on the phone with him and explained to him what was going on. He also explained everything to my friend so that if my family called while I was in surgery, he could update them,” he recalls.

At 10:30 AM, as Chris’ family made their way to Brooklyn to be with him, Dr. Ayad began the five-hour operation. After the surgery, he was taken to the intensive care unit for post-operative care. He was also seen by Dr. John Heitner, director of non-invasive cardiology at NewYork-Presbyterian Brooklyn Methodist, who found Chris had endocarditis — a bacterial infection of the heart valve. His doctors suspect the bacteria broke off from the valve and traveled to the brain from a hole in his heart, which caused the abscess to form.

“When I woke up, the headache was gone, which was huge,” he says. He was discharged from the hospital five days after the surgery to recover at home. He was given antibiotics to fight off any remaining infection in his brain and heart.

Since the surgery, Chris is back to normal, even auditioning a week after being discharged with his PICC (peripherally inserted central catheter) line still inserted in his arm.

“My training as an actor is to use everything that is going on with me, so I used it as part of my character,” he says. A few months later he booked a Super Bowl commercial.

Chris continues to follow up with Dr. Ayad to ensure the abscess does not recur. Reflecting on the care he received at NewYork-Presbyterian Brooklyn Methodist Hospital, Chris says he’s grateful to have received such high-quality care so close home.

“The care from top to bottom — from the ER doctors to the ICU team — was excellent. They were super attentive to me. Dr. Ayad made me feel comfortable,” he says.