Stroke is one of the leading causes of disability, affecting 800,000 people every year in the United States alone. In the days and weeks following stroke, the brain attempts to repair damaged neural pathways and develop new ones to restore function, but often with limited success, resulting in chronic disability for some 50 to 70 percent of survivors.

At NewYork-Presbyterian Brooklyn Methodist Hospital, eligible stroke survivors can now take part in The EMAGINE Stroke Recovery Trial, which provides a unique care model that enables treatment in both a clinical facility and a home setting. The clinical trial is evaluating BrainQ, a wearable artificial intelligence medical device designed to reduce disability and promote neuro-recovery. Approved by the U.S. Food and Drug Administration in 2021 as a Breakthrough Device, the investigational noninvasive portable medical device developed by an Israeli company creates a frequency-tuned low-intensity electromagnetic field to stimulate neuronal networks. 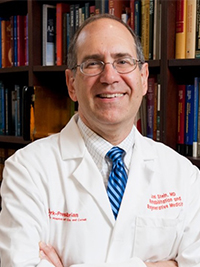 “BrainQ uses a low level of electromagnetic stimulation for the brain that is believed to help facilitate recovery of brain function after stroke. If it proves beneficial for stroke survivors, it may be useful in other neurological disorders as well,” says Joel Stein, MD, Physiatrist-in-Chief, NewYork-Presbyterian, who is the principal investigator for New York’s only participating site. “The therapy provides a ‘gentle nudge’ to try to normalize electrical activity patterns in the brain. Because of its very low level of noninvasive stimulation of the brain, we believe it is really quite safe for patients. We’re hopeful that it will, when coupled with exercise, facilitate recovery for stroke survivors, particularly those individuals who have upper extremity motor impairment.”

“If this large multicenter study provides enough data to prove that this therapy is beneficial, it could be relevant for many stroke survivors, particularly the large percentage who have weakness.” — Dr. Joel Stein 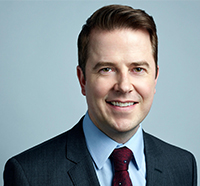 “This is one of the first devices of its kind that actually goes home with the patient,” says Jason Edwards, DO, Director of Brain Injury in the Department of Rehabilitation Medicine at NewYork-Presbyterian Brooklyn Methodist. Dr. Edwards serves as co-principal investigator of the double-blind randomized multicenter study to test the efficacy of BrainQ in facilitating the recovery of patients with ischemic stroke who have moderate to severe disability. “Many of the sessions take place with the therapist virtually. The patient also utilizes a user-friendly app that navigates them through the process.”

A whole-brain magnetic field generator, BrainQ consists of a cylindrical headpiece with a back brace and hip pack. The headset feeds the patient’s own patterns into BrainQ’s cloud-based service, which produces a tailored treatment pattern. The system is run via a tablet app, which can be operated by a caregiver or through a built-in telemedicine platform. “Because of the size of the device and for safety reasons, we also train a caregiver who can help the patient perform the treatments at home,” says Dr. Edwards. 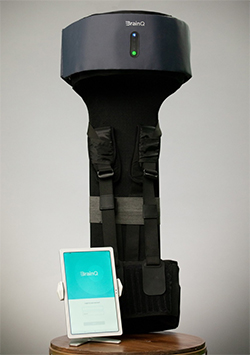 The study comprises 45 sessions over a period of 9 weeks, 5 treatments per week, and includes an evidence-based physical and occupational therapy regimen lasting about an hour. “During the first 40 minutes, the patient wears the device, which is focused on the upper extremity,” explains Dr. Edwards. “For the remaining 20 minutes, the patient removes the device and proceeds to the exercise component, which focuses more on the legs and standing and walking transfers. The exercises are contained in the app. One of its unique aspects is that as the patient improves, the therapist can adjust the functional level of the exercises to make sure that the patient continues to be challenged.”

“If this large multicenter study provides enough data to prove that this therapy is beneficial, it could be relevant for many stroke survivors, particularly the large percentage who have weakness,” says Dr. Stein.

As Dr. Stein points out, similar advanced treatments require patients to come to the hospital and work with a skilled practitioner. “The fact that BrainQ is a home-based therapy is advantageous in a number of ways,” he says. “It’s much more accessible to patients with less disruption in their lives and less need to travel to the hospital.”

Dr. Stein also notes that this is the first clinical trial conducted by the Department of Rehabilitation Medicine at NewYork-Presbyterian Brooklyn Methodist Hospital. “We're very excited not just to be participating in an enterprise such as this, but to be expanding our clinical research into Brooklyn,” he adds. “Making this trial available to the Brooklyn community – as well as to patients anywhere within the NewYork-Presbyterian system – is another important aspect of this program.”

THE "EMAGINE" STUDY: The Efficacy of a Frequency-tuned Electromagnetic Field Treatment in Facilitating the Recovery of Subacute Ischemic Stroke Patients – A Pivotal Study