Statural Growth Differs by Sex in Children with Crohn’s Disease ─ Why?

Statural growth impairment, both a marker for and complication of poorly controlled Crohn’s disease, occurs in up to 80 percent of patients, more frequently in males than females for unknown reasons. Neera Gupta, MD, MAS, is a physician-scientist and Director of Research, Pediatric Inflammatory Bowel Disease Center, NewYork-Presbyterian Komansky Children’s Hospital at NewYork-Presbyterian/Weill Cornell Medical Center. Dr. Gupta is leading a prospective multicenter longitudinal cohort study (The Growth Study) to investigate the underlying mechanisms of sex differences in statural growth impairment in children with Crohn’s disease. The study also aims to develop robust sex-specific predictive models to identify children at highest risk for growth impairment, which is important since there is only a narrow therapeutic window available to intervene to improve growth. Normalization of growth is a marker of disease control and successful Crohn’s disease therapy. Dr. Gupta serves as Principal Investigator for The Growth Study, an ongoing NIH-funded and Crohn’s and Colitis Foundation-funded multicenter investigation. 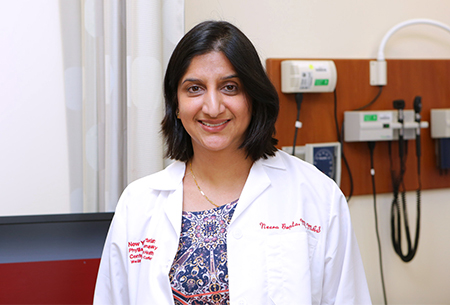 “Findings from The Growth Study suggest sex-specific molecular pathways lead to statural growth impairment,” says Dr. Gupta. “Our findings highlight the need to develop a sex-specific treatment approach for children with Crohn’s disease, which will represent a major paradigm shift in clinical practice.”

The study examining clinical variables associated with statural growth in children with Crohn’s disease, published in the June 2021 issue of Inflammatory Bowel Diseases, was selected as Editor’s Choice and Leading Off article. The study received a mention on the cover of the journal and is in the top 5 percent of all research outputs scored by Altmetric.

In their most recent publication, Dr. Gupta and her colleagues at nine other medical centers conducted an investigation that examined a range of clinical variables and their association with statural growth by sex for 113 children with Crohn’s disease with a mean chronological age of 12 years. The clinical information collected and analyzed included such variables as:

Among 41 female patients, an initial classification of IBD as Crohn’s disease or perianal disease at diagnosis were associated with better growth. However, patient-reported joint pain at symptom onset or the use of probiotics or azathioprine/6-mercaptopurine were associated with worse growth.

Dr. Gupta and her colleagues noted that females appear to have better growth independent of their disease severity/inflammatory burden and medication therapies. Their findings suggest that sex-specific molecular pathways lead to statural growth impairment in children with Crohn’s disease. There also may be a difference in the response of these sex-specific molecular pathways to current medications used to treat this disease.

They conclude, “The novel findings in this report support the need for investigating, identifying, developing, and instituting effective sex-specific treatment strategies, an approach that is not currently part of the pediatric Crohn’s disease management algorithm.”