Perspectives on Chronic Kidney Disease in the Pediatric Population

Iron Metabolism and Iron Therapy in Children with CKD 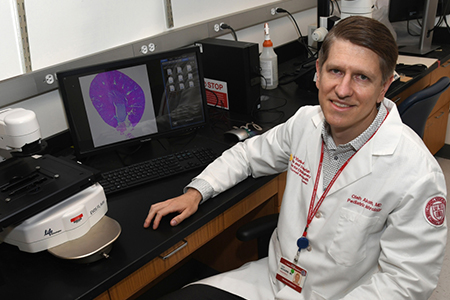 Emergent evidence suggests that the role of iron homeostasis and effects of iron therapy in chronic kidney disease (CKD) in children are far reaching and may contribute to the development of inflammation, oxidative stress, kidney fibrosis, cardiovascular disease, CKD-mineral and bone disorder, and skeletal growth problems. As the disease progresses, iron supplementation becomes necessary in most children with CKD. But what is the optimal approach to the correction of disrupted iron homeostasis?

With this in mind, Oleh M. Akchurin, MD, PhD, a pediatric nephrologist at NewYork-Presbyterian Komansky Children’s Hospital, and Edwin Patino, MD, a research associate in the Department of Medicine at Weill Cornell Medicine, undertook a comprehensive review of the potential for pro-oxidative influences of iron on CKD complications independent of erythropoiesis and resulting anemia to further understand the efficacy and safety of many widely used traditional iron preparations not previously examined in clinical trials.

In recent years, it has become increasingly more clear that the degree of oxidative stress and potential adverse effects of iron therapy vary depending on iron formulations and perhaps by their dosage and route of administration. As a result, it is challenging for clinicians to determine the optimal use of iron therapy, especially in children with CKD.

The review, published online in the July 2021 issue of Pediatric Nephrology, highlights how iron may be implicated in the pathophysiology of many CKD manifestations and complications, including:

Chronic low-grade inflammation is now well recognized in patients with CKD. Iron is well known to possess pro-oxidative potential and whether iron administration contributes to inflammation in patients with CKD has been intensively investigated. While the body is able to regulate reactive oxygen species at physiological concentrations, excessive amounts begin to react with lipids, proteins, and nucleic acids resulting in accumulating levels of oxidative stress and damage to essential macromolecules, further driving chronic inflammation.

Complex immune dysfunction is directly related to chronic inflammation and infections are the second leading cause of death in patients undergoing hemodialysis. It has been suggested that iron therapy in certain situations may increase the likelihood of systemic infections related to CKD due to deficient levels of neutrophils, impaired phagocytosis, suppressed macrophage response, and inability to inactivate intracellular bacteria.

Studies have demonstrated that iron therapy may play a role in altering kidney fibrosis and the overall progression of CKD. Since the kidney is highly metabolically active, it is susceptible to the effects of oxidative stress, which can contribute to tubulointerstitial fibrosis, a final common pathway of CKD. Experimental data suggests that the concentration of kidney iron content may correlate with the severity of kidney fibrosis, but the effects seem to depend on the specific route of iron preparation. Intriguingly, certain iron preparations were shown to improve kidney fibrosis in experimental settings. Additional research is needed to determine which formulations offer protection and which promote further fibrotic changes in the kidney, as well as to unravel the underlying mechanisms.

Recent pre-clinical studies suggest that certain iron preparations may exacerbate bone disease in CKD. A unique combination of abnormal mineral metabolism, disturbed iron homeostasis, and iron therapy may have an impact on bone health in patients with CKD. Evaluating the relationship between biomarkers of bone turnover and iron therapy status in a cohort of children with CKD, the authors found that those treated with iron had lower levels of circulating biomarkers of bone formation and fewer circulating osteoblast precursors.

Limited clinical information exists to truly comprehend the complex function that iron status and supplemental iron therapy play in skeletal growth physiology. Recent animal studies by Dr. Akchurin have suggested several mechanisms by which hepcidin, a master iron regulatory hormone, may impact skeletal growth. However, it is recognized that an individual approach is necessary as iron deficiency can potentially impact neurocognitive development while iron excess may interact with growth.

Iron deficiency complicated by anemia may produce additional negative stress on the cardiovascular system and can result in left ventricular hypertrophy, while iron overload has been implicated in vascular disease in patients with CKD. Cardiovascular effects may also be dependent on the form of supplemental iron therapy administered, with further distinction observed pre-dialysis versus during dialysis.

“These intriguing connections between iron and various aspects of CKD pathophysiology open promising opportunities for the optimization of care via carefully selecting those modalities of iron therapy that not only improve anemia, but also have favorable effects on other CKD complications,” says Dr. Akchurin.

FoxO3: A Role in Delaying the Development of Chronic Kidney Disease

Acute kidney injury (AKI) can result in the development of chronic kidney disease (CKD) if the initial injury is severe or multiple episodes of injury occurred in the kidney. The pathological changes during transition from AKI to CKD include the loss of kidney microvessels leading to renal hypoxia. Kidney tubular epithelial cells can respond to the hypoxic signal and activate counter-mechanisms such as autophagy for cell adaptation and survival. 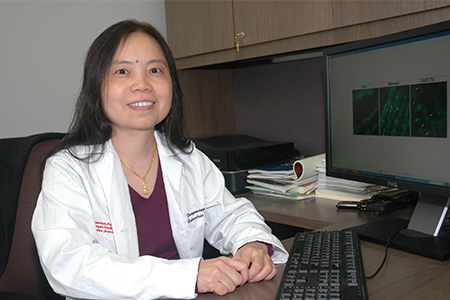 A laboratory study led by Fangming Lin, MD, PhD, Director of Pediatric Nephrology at NewYork-Presbyterian Morgan Stanley Children’s Hospital, investigated cellular and molecular mechanisms regulating hypoxia-induced autophagy. “Our findings demonstrated that FoxO3, a stress responsive transcription factor, was stabilized and activated in the hypoxic environment through the mechanism of hypoxia-induced inhibition of prolyl hydroxylation and degradation. FoxO3 regulated adaptive responses that counteract adverse effects of chronic hypoxia by augmenting autophagy and reducing oxidative stress,” notes the research team. “Moreover, tubular deletion of FoxO3 during the transition from AKI to CKD in mouse models aggravated damage to renal structure and function thereby causing a more profound CKD phenotype, further supporting a role of FoxO3 in preventing the development of CKD.”

Results from this study, published in a 2019 issue of the Journal of Clinical Investigation, have the potential to impact care of patients as hypoxia can be a common pathogenic factor for many types of chronic kidney disease. A subsequent paper authored by Dr. Lin and published in the July 2020 issue of Current Opinion in Nephrology and Hypertension further elucidated the biological function of FoxO3 transcription factor in chronic kidney disease gained from animal studies.

FoxO3 activation as a counteractive mechanism to stress is also relevant in humans. “We show that in human kidneys biopsied for AKI or AKI-on-CKD and increased nuclear FoxO3 expression coexist with autophagosomes and autolysosomes in injured proximal tubules,” says Dr. Lin. “The association of FoxO3 activation with the autophagic response suggests that, just as we have learned from mouse studies, FoxO3 may regulate stress adaptation in human kidneys as well. Given the importance of prolyl hydroxylation in FoxO3 activation in the context of renal hypoxia, targeting these enzymes to stabilize the FoxO3 protein could represent a new therapeutic approach.”

Dr. Lin’s study highlights a previously unrecognized hypoxia-mediated molecular regulation and function of the FoxO3 transcription factor in renal tubular defense against the development of CKD. Knowledge gained from the bench may be translated to the bedside by guiding the development of future strategies that target FoxO3 to prevent or treat CKD.