Neonates and SARS-CoV-2:
What are the Risks? 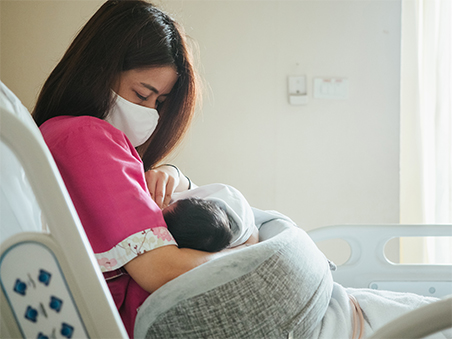 When COVID-19 entered the medical sphere of care, pediatric specialties were not exempt from the weight of its impact. In the Labor and Delivery Rooms and NICUs of NewYork-Presbyterian Komansky Children’s Hospital and NewYork-Presbyterian Morgan Stanley Children’s Hospital, the effect on infants born to SARS-CoV-2-positive mothers was particularly concerning. Early in the COVID-19 pandemic, little was known about SARS-CoV-2 infection in pregnant women and its impact on fetuses and neonates, as well as the optimal clinical management of mother and newborn. To assess the possible risk factors associated with vertical and perinatal transmission, maternal-fetal medicine specialists, neonatologists, and pediatric infectious disease specialists at NewYork-Presbyterian came together to conduct studies that would inform evidence-based infection prevention and control policies.

At NewYork-Presbyterian Komanksy Children’s Hospital, an observational cohort study was conducted of all neonates born between March 22 and May 17, 2020 to mothers who tested positive for SARS-CoV-2 at delivery. Of 1,481 deliveries, 116 mothers tested positive for SARS-CoV-2 and 120 neonates were identified. The mothers followed proper hand hygiene before skin-to-skin contact, breastfeeding, and routine care. Neonates were placed in a closed isolette in the same room as their mother and held for feeding.

The authors of both studies – with a combined evaluation of more than 200 newborns – conducted in major academic medical centers at the epicenter of the pandemic, agree that rooming-in and establishing breastfeeding while incorporating infection control practices is reasonable and supports keeping mothers who are positive for SARS-CoV-2 and their newborns together.

All neonates were tested for SARS-CoV-2 by use of real-time PCR on nasopharyngeal swabs at 24 hours of life, at 5 to 7 days, and at 14 days, and were later evaluated via telemedicine at one month. None were positive for SARS-CoV-2. Of the 82 neonates completing follow-up at days 5 to 7, 68 roomed in with their mothers immediately after delivery and during their postpartum stay. Most neonates were discharged home within two days, and in most cases the mother continued breastfeeding.

The study findings, which were published in the October 2020 issue of The Lancet Child & Adolescent Health, support the low risk of perinatal transmission when strict infection control practices are followed. The investigators noted that if risks are deemed low, the benefits of early mother-neonate bonding and breastfeeding should be promoted during the perinatal period.

These findings were corroborated in a study conducted at NewYork-Presbyterian Morgan Stanley Children’s Hospital, where a retrospective cohort analysis reviewed the medical records for maternal and newborn data for 101 neonates born to 100 mothers with suspected or documented SARS-CoV-2 infection from March 13 to April 24, 2020.

The authors of both studies – with a combined evaluation of more than 200 newborns – conducted in major academic medical centers at the epicenter of the pandemic, agree that rooming-in and establishing breastfeeding while incorporating infection control practices is reasonable and supports keeping mothers who are positive for SARS-CoV-2 and their newborns together.