In 2021, Dr. Giulino Roth was awarded the Hyundai Hope Scholar Grant to further her research in this area, with a specific focus on Burkitt lymphoma. This cancer is rapidly fatal if left untreated. However, most children in the U.S. with Burkitt lymphoma – more than 90 percent – will respond well to treatment with high-dose chemotherapy. 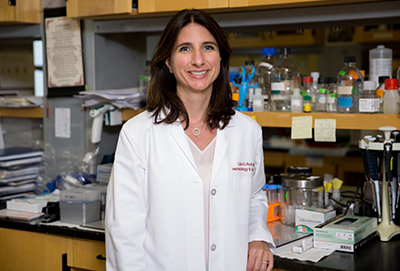 Dr. Giulino Roth became interested in Burkitt lymphoma during her residency while visiting Weill Bugando University College of Health Sciences/Bugando Medical Centre in Mwanza, Tanzania, which had an entire ward dedicated to the disease. In this region almost all of the cases of Burkitt lymphoma are associated with Epstein-Barr Virus (EBV). Since that time, her research in Hodgkin and non-Hodgkin lymphomas has continued in earnest and, today, Dr. Giulino Roth is nationally recognized in the field, serving in leadership positions within the Children’s Oncology Group on both the Hodgkin lymphoma and non-Hodgkin lymphoma committees. She also spearheaded the first national clinical trial to explore the efficacy of an immune checkpoint inhibitor in both children and adults with primary mediastinal B-cell lymphoma and a national trial evaluating immune checkpoint inhibition in children, adolescents, and young adults with Hodgkin lymphoma.

“Burkitt lymphoma is seen in a small population of children in this country, but it remains one of the most common and deadliest childhood cancers in sub-Saharan Africa,” says Dr. Giulino Roth, who seeks to change the course of care for children and young adults with Burkitt lymphoma here and abroad. “The global community has rallied around efforts to improve the diagnosis and treatment of these and other EBV-related lymphomas.”

This goal remains within Dr. Giulino Roth’s sights throughout her ongoing research pursuits to identify novel therapies in Hodgkin and non-Hodgkin lymphoma. She has uncovered novel genetic alterations that can be targeted in pediatric Burkitt lymphoma and Hodgkin’s lymphoma and has also defined mechanisms to harness the anti-viral immune response to treat lymphomas associated with the Epstein-Barr virus.

The challenge in treating Burkitt lymphoma is due, in part, to the restricted viral latency of EBV in this lymphoma subtype. While T-cell immunotherapy is effective against EBV-infected lymphomas that express the full EBV latency III program, most EBV+ lymphomas, including Burkitt lymphoma, express the latency I program. In this circumstance, the single Epstein-Barr nuclear antigen (EBNA1) that is produced is poorly immunogenic, enabling tumors to evade immune responses.

Dr. Giulino Roth’s research team at Weill Cornell Medicine led a study to determine if pharmacologic modulation of latency I tumors could induce immunogenic latency III viral antigen expression and if this would sensitize resistant tumors to EBV-directed immunotherapy. The study was conducted in collaboration with specialists in hematology, pathology, and infectious diseases at several other major institutions.

Their findings, published in the May 21, 2020 issue of Blood, validated the research hypothesis and revealed the following:

Decitabine treatment induces an up-regulation of EBV latency III antigen LMP-1 in Kem I in vitro. Immunofluorescence staining for LMP-1 in Kem I cells treated with drug (decitabine) vs vehicle control (DMSO) for 72 hours at the following doses: A) vehicle B) decitabine 50 nM C) decitabine 1 uM. Data are shown as percent GFP/Dapi in treated cells compared with vehicle control. Experiments were performed in triplicate.

“Our approach represents a departure from traditional EBV-directed therapy,” notes Dr. Giulino Roth. “We sought to shift latency in order to create a more immunogenic tumor that is responsive to immunotherapy. Through a comprehensive pharmacologic screen, we found that a short course of low-dose decitabine can depress latency I and III EBV+ Burkitt lymphoma antigens, with effects persisting beyond completion of the therapy.”

Referencing her international motivation, Dr. Giulino Roth notes, “Our results have profound implications for providing treatments to children with EBV lymphomas in sub-Saharan Africa and resource-limited countries where high-dose chemotherapy is not feasible, and outcomes are poor. These children would particularly benefit from targeted therapies.”