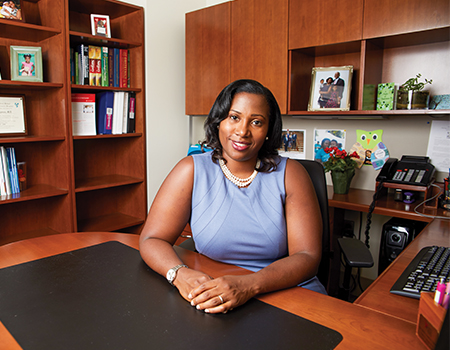 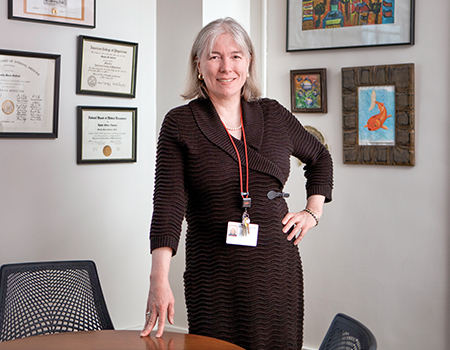 “Multiple studies have shown that among underserved populations, there is from 20 to 40 percent nonadherence for colposcopy treatment,” says Eloise Chapman-Davis, MD, a specialist in gynecologic cancers in the Department of Obstetrics and Gynecology at NewYork-Presbyterian/Weill Cornell Medical Center. “Talking about disparities is one thing but trying to create interventions to make changes is something that I’m passionate about so that it doesn’t continue to happen.” Dr. Chapman-Davis, whose career has long focused on bringing advanced medical care to the underserved here and around the world, in collaboration with Monika M. Safford, MD, founder and Co-Director of the Cornell Center for Health Equity and Chief of General Internal Medicine at Weill Cornell Medicine, are developing a web-based intervention to educate and motivate women to continue with follow-up care, particularly those with abnormal Pap smears.

“While we still have a significant number of patients in the U.S. with cervical cancer, the overall incidence and mortality from cervical cancer has dropped dramatically thanks to effective screening programs — except for Hispanic and African American women,” says Dr. Chapman-Davis. “The incidence and death from cervical cancer are definitely not equal across races/ethnicities or socioeconomic classes. Outcomes, in general, are worse with women who are uninsured, underinsured, and of low income. They may be diagnosed at later stages because they present later, or perhaps these patients have limited education and may not understand why follow-up is important. Even women who already have an abnormal Pap smear and who are at high risk are not following up. If we could treat them early on, we could prevent them from presenting later with advanced cancer and greatly reduce their risk of dying from this disease.”

Dr. Chapman-Davis is focusing on patients who come to the colposcopy clinic in Weill Cornell’s Women’s Health Practice, which primarily serves low income, underserved women across multiple ethnicities. “These women already have an abnormal Pap smear,” she says. “The next step in the diagnosis and treatment of these precancerous lesions or cancer is usually a colposcopy.”

With no-show rates for follow-up at the Women’s Health Practice as high as 30 to 40 percent, Dr. Chapman-Davis knew something had to be done. She turned to Dr. Monika Safford, who has achieved success in producing online, accessible, and easily understood medical information with the Patient Activated Learning System (PALS) for low literacy populations. In March 2017, PALS premiered online with its first round of medical information focused on hypertension. Since then, over 70,000 visitors from over 170 countries have accessed the site.

“This is a perennial problem across the country, and our colposcopy clinic is no exception, unfortunately,” says Dr. Safford. “You’re dealing with an indigent population. Their telephone numbers turn over very frequently, and certified letters about the results of their biopsy come back addressee unknown. Then what do you do with that?”

With funding from the Dean’s Diversity and Healthcare Disparity Research Award, Dr. Chapman-Davis enlisted Dr. Safford to generate pilot data through the PALS. “Our goal is to create engaging and informative videos and text based on information we draw from the patients’ initial interviews,” says Dr. Chapman-Davis. “These interviews reveal their baseline knowledge, what they believe the barriers to be, and the reasons why they’re not following up.”

“Dr. Chapman-Davis identified large communication gaps in the colposcopy clinic where women don’t understand even basic information about Pap smears and very few women have heard of colposcopy,” says Dr. Safford. “Even if it had been explained to them several times, it didn’t necessarily register. Dr. Chapman-Davis was looking for some reinforcement.”

Toward that goal, Dr. Safford and Dr. Chapman-Davis are developing an intervention configured for a smartphone or desktop application that provides a link to the PALS website at the time of the patient’s appointment reminder. This reminder will be in the form of a text message that explains in simple language the importance of keeping their appointment. “Our project is about engaging women, hearing their concerns, determining knowledge deficits, and developing content to answer their questions in language they can understand,” says Dr. Safford.

“The initial phase of our study is to conduct the qualitative component to actually hear from patients. Based on those interviews, we will address their concerns through a library of eight to 10 videos in English and Spanish created at a 6th grade reading level,” says Dr. Chapman-Davis. “Once we develop the intervention, we want to pilot test it in the clinic with 40 patients between the ages of 18 and 65. We will provide tablets for them to view and help them work their way through the program. We also want to make sure that this is something that can be utilized at home, so part of our inclusion criteria is that everyone has to have a smartphone.” Fortunately, national and New York City data suggest that many residents who live in low-income neighborhoods have smartphones.

The end points of the pilot study will be to evaluate feasibility, satisfaction, and knowledge retention of key concepts. Patients will be tested before and after the intervention to gauge how much knowledge they retained from the questions addressed in the videos. During the one-year timeline, the team will determine if this approach holds promise. “If we find that it does, we would want to put a larger grant proposal together and conduct this program across a number of clinics in large academic centers to see if we can really make a difference and convince women to come back and receive definitive treatment for their problem,” says Dr. Safford.

“This would not only be a way to help train physicians about how to treat these underserved populations in a culturally competent way, but it can also help make sure that we physicians give patients the proper education,” adds Dr. Chapman-Davis. “Patients can access this information at home and, hopefully, that will help alleviate their worries and let them know what to expect before they even walk into the physician’s office.”