It was so impressive how thorough he was. I knew I was in the right place

Susan Kingsolver loves competition. The 63-year-old managing director of a financial institution regularly participated in triathlons and biathlons. But ten years ago, she found herself struggling to make it to the finish line.

"A client had just started triathlons, and he challenged me to do one with him. But I could barely complete the run and couldn't do the bike. I usually finish in the middle of the pack, but that time I was in the last group," she says. For some time, Susan's spine was shifting to the right causing her to have incredible pain, so bad she could hardly do basic tasks like walking. Fed up with the pain and physical limitations, she decided to schedule an appointment with a spine specialist who determined she had scoliosis, a condition in which the spine curves to the side, forming an 'S' or 'C' shape.

Curves are a normal part of the spine's structure. However, if the spine curves in the wrong direction, it can cause low back pain, stiffness, and fatigue. The curvature can stretch, irritate, or squash nerves and strain joints, causing them to become inflamed. Susan's scoliosis was causing her to develop spinal stenosis — a narrowing of the spaces within your spine, which pinched the nerves in her lower back. She was also having balance problems, at times tipping over. The spine surgeon recommended having partial spinal fusion surgery.

"I didn't like the approach — he said he could only go halfway up my spine, but I didn't think that would improve my situation," she says. Speaking with a friend, Susan was told she should go see Dr. Lawrence Lenke, a spine surgeon specializing in scoliosis at the NewYork-Presbyterian Och Spine Hospital. One of the world's foremost leaders in complex spinal deformity surgery, he serves as surgeon-in-chief at the spine hospital and director of spinal deformity surgery at NewYork-Presbyterian/Columbia University Irving Medical Center. 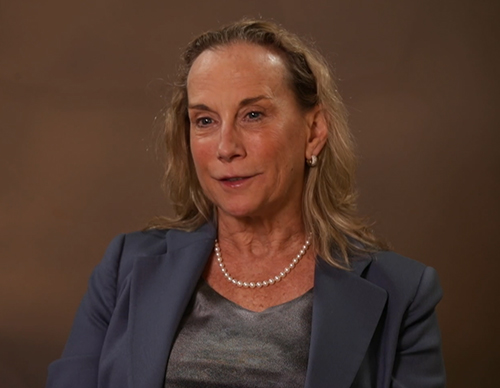 "Compared to the other doctors, Dr. Lenke was very thorough in helping me to make the right decision. He

convinced me that my spine was going to the right, and any kind of partial solution was just going to have to be corrected at a later date," she says.

Convinced she found the right doctor, Susan scheduled surgery for June 2018. On the day of the surgery, Susan was wheeled into the operating room and saw a wall covered with images of her spine. "There had to be 100 images on this massive wall of each disc of my spine. It was so impressive how thorough he was. I knew I was in the right place," she says. Dr. Lenke and his team performed an eight-hour spinal fusion surgery. She was up and moving the day after surgery. After five days in the hospital, Susan was released to her home.

"Dr. Lenke prescribed walking as physical therapy. So I would take the bus over to Central Park and walk. I did that for two months; then I started with a physical therapist to help with balance and stability," she says.

Although Susan is no longer training for triathlons, she is back to living an active life. She says she works out up to six days a week — working with a personal trainer as well as taking spin classes and exercising on the elliptical at the gym. She says having this surgery has helped her to regain her life.

"This surgery was a life-changer. When I talked to Dr. Lenke about having the surgery, he told me this was about improving my quality of life, and he was absolutely right," she says.