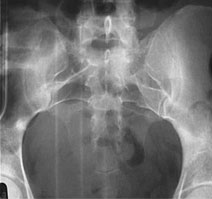 The diagnostic x-ray division at NewYork-Presbyterian Queens has more than 40 technologists who perform over 70 percent of all the Radiology Department procedures. All staff technologists are registered by the American Registry of Radiologic Technologists (ARRT) and licensed by the New York State Department of Health.

We have 4 state-of-the-art digital x-ray units within the Xray department including the emergency room, as well as a separate orthopaedic unit on the 4th floor. NYP/Queens uses the PACS system which allows physicians access to x-ray images via the Internet for immediate results and diagnosis. The department performs digital general x-ray examinations and digital fluoroscopy procedures.

Fluoroscopy is an imaging technique commonly used by physicians to obtain real-time moving images of the internal structures of a patient through the use of a fluoroscope. In its simplest form, a fluoroscope consists of an x-ray source and fluorescent screen between which a patient is placed.