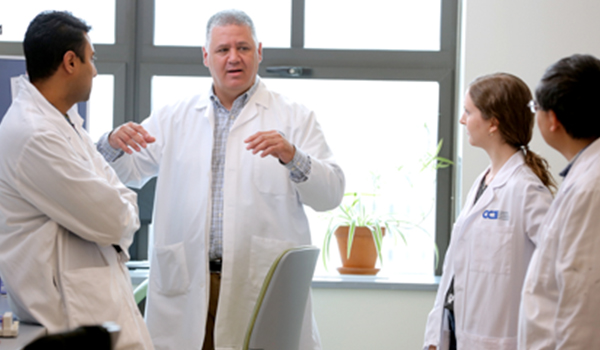 When Adam Mor, MD, PhD, a rheumatologist and molecular immunologist in the Division of Rheumatology at NewYork-Presbyterian/Columbia University Irving Medical Center, first established his basic science laboratory several years ago his goal was to study the biology of the T cell to complement his clinical practice caring for patients with autoimmune disease.

“During our early studies, we began to realize that, very importantly, as with autoimmune disease, T cells also play a major role in cancer biology,” says Dr. Mor. “When the T cells are overactivated they lead to clinical symptoms of autoimmunity and likewise dysfunctional T cells can lead to the development of cancer. We’ve also known for some 20 years that when we treat our patients with RA or lupus with drugs targeting the immune system, they can develop cancer. On the other hand, some patients with cancer are treated with therapies that further activate the immune system. This is all mediated through the T cell.”

With this in mind Dr. Mor’s lab turned its focus to studying the signaling events associated with the function of T lymphocytes. “We can do this in the same cell and in the same molecule for both diseases,” says Dr. Mor, who is also a member of the Columbia Center for Translational Immunology. “The key is in fine-tuning therapies – not too much and not too little – to avoid autoimmunity and to avoid cancer. Our ultimate goal is to develop strategies for the modulation of T-cell functions, which we can translate into new therapeutic modalities for patients suffering from cancer and autoimmune diseases.” 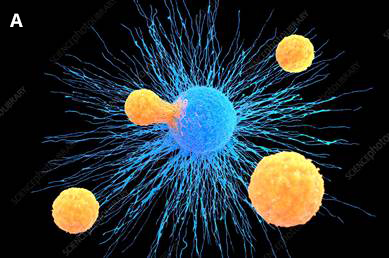 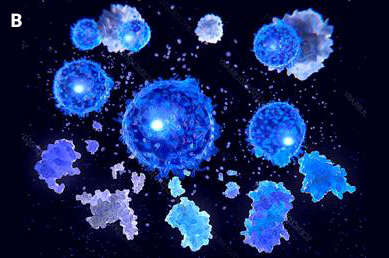 Illustrations of (A) T lymphocytes (orange) attaching to a cancer cell (blue) and (B) T helper cells and interleukin molecules, which play an important role in the immune system.

According to Dr. Mor, as many as 30 percent of all patients who receive any type of cancer immunotherapy will develop secondary autoimmunity. “As such, understanding the mechanisms that control immune-tolerance breakdown and lead to excessive inflammation in cancer patients undergoing treatment remains a critical goal,” adds Dr. Mor. “Knowledge of their function is crucial for both the identification of the predictive biomarkers for inflammatory toxicities and the development of a new generation of safer immunotherapies.”

One component or Dr. Mor’s research involves cancer patients as models for generalized autoimmunity. “We are collecting T-cell blood samples from patients with cancer who have been treated with immunotherapies and developed an autoimmunity. We then use single-cell RNA sequencing to study the ways in which the PD-1 blockade reshape homeostatic T-cell responses,” explains Dr. Mor. “These findings are helping to fill a critical gap in our understanding of the molecular complexity within the T-cell repertoire transition during the development of primary autoimmunity.”

Researchers in the Mor Lab are also applying proteomic approaches to identify proteins in T cells that have the potential as therapeutic targets to enhance or inhibit the function of T cells. “These are checkpoint proteins that regulate the function of T cells and T cells overall,” says Dr. Mor. “The concept is that they don’t turn on and off; they have different levels of activity. So, we model that level of activity with antibodies that we have developed in the lab in collaboration with the Columbia Center for Translational Immunology. High-resolution proteomic approaches have enabled us to uncover targetable signaling proteins downstream of PD-1, as well as novel checkpoints that are highly expressed on tumor-infiltrating lymphocytes. We are now pursuing studies to confirm their value as potential therapeutic targets.”

A Requisite for New Checkpoint Inhibitors

While PD-1 is a critical inhibitory checkpoint for T cells, and antibodies that block its signaling in turn promote the immune-mediated clearance of malignant cells, current anti-PD-1 therapeutic agents benefit only a small fraction of patients. “There is an urgent need to develop therapeutics that more effectively target the PD-1/PD-L1 pathway as well as other inhibitory checkpoints,” says Dr. Mor.

To that end, Dr. Mor is employing a novel technology – Phosphoproteomic Mass Spectrometry combined with in-silico Prediction Algorithm (PMSPA) – to identify additional checkpoints that, like PD-1, regulate the functions of the immune system. “This technology enables us to identify novel drug targets to improve clinical response and overall survival among patients who don’t respond to current checkpoint immunotherapies,” he says.

As one case in point, with this approach, Dr. Mor and his colleagues identified the protein PAG as a potential new target. When implanting tumors in genetically engineered mice where this protein was deleted, tumor growth was limited, indicating that PAG is a critical mediator of PD-1 signaling with the capacity to enhance T cell activation in tumors.

In 2020, Dr. Mor was presented with the Cancer Research Institute’s Technology Impact Award for his pursuit of targetable kinases to enhance checkpoints inhibition.

Dr. Mor’s overarching mission is to combine what he and his team are learning in basic studies in his lab with a protocol in the clinics that supports collaboration among rheumatologists and oncologists to better treat those patients with cancer who go on to develop autoimmunity. “These patients also serve as a resource for future research,” says Dr. Mor. “The goal of my lab is not just to create drugs; it’s to optimize care for patients with cancer and with autoimmune disease.”