A research team led by Sunil K. Agrawal, PhD, Professor of Mechanical Engineering and Rehabilitation/Regenerative Medicine, Columbia University, has shown that a robot-driven device — Tethered Pelvic Assist Device (TPAD) — created by the Robotics and Rehabilitation (ROAR) Laboratory at Columbia University helps strengthen muscles and improve coordination in children with cerebral palsy. The device is able to apply desired forces and moments on the pelvis in any direction of the space. The pilot study has been published in the July 26, 2017 issue of Science Robotics.

A subset of children with cerebral palsy exhibit crouch gait, which is caused by a combination of weak extensor muscles that do not produce adequate forces to keep posture upright, coupled with tight flexor muscles that limit the joint range of motion. In particular, the soleus muscle plays an important role in preventing knee collapse during the middle of the stance phase when the foot is on the ground. Critical to standing and walking, the soleus muscle keeps the shank upright during the mid-stance phase of the gait to facilitate extension of the knee. It also provides propulsive forces on the body during the late-stance phase of the gait cycle.

“One of the major reasons for crouch gait is weakness in the soleus muscles,” says Dr. Agrawal. “We hypothesized that walking with a downward pelvic pull would strengthen extensor muscles, especially the soleus, against the applied downward pull and would improve muscle coordination during walking. We took an approach opposite to conventional therapy with these children. Instead of partial body weight suspension during treadmill walking, we trained participants to walk with a force augmentation.”

The researchers evaluated six children diagnosed with CP who exhibit crouch gait during 15 brief training sessions over a six-week period. The children wore the TPAD belt as they walked on the treadmill, while cameras captured real-time motion data. The researchers programmed the TPAD to apply an additional downward force through the center of the pelvis to intensively retrain the activity of the soleus muscles.

The researchers found that their training was effective, enhancing both the children’s upright posture and improving their muscle coordination. In addition, their walking features, including step length, range of motion of the lower limb angles, toe clearance, and heel-to-toe pattern, improved.

“Feedback from the parents and children involved in this study was consistent,” says Heakyung Kim, MD, A. David Gurewitsch Professor, and Director, Pediatric Physical Medicine and Rehabilitation, NewYork-Presbyterian. “They reported improved posture, stronger legs, and faster walking speed, and our measurements bear that out. We think that our robotic TPAD training with downward pelvic pull could be a very promising intervention for these children.”

(Source: Columbia Engineering, adapted from an article by Holly Evarts) 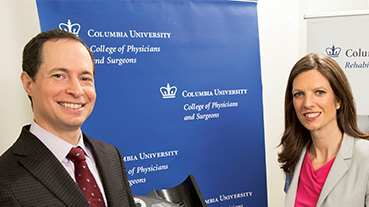 The Columbia RunLab offers high-level personalized evaluation and education to runners of all levels and experience to optimize their performance and prevent injury.
Learn More

A Focus on Faculty: Highlighting a Range of Expertise
Learn More