Degenerative cerebellar disease, a group of heterogeneous disorders marked by impaired balance, loss of coordination, and gait deficits, affects some 150,000 Americans. Without disease-modifying medications, rehabilitation is currently the mainstay of treatment to improve motor skills and functional performance. For the past several years, Scott A. Barbuto, MD, PhD, a physiatrist and clinical researcher in the Department of Rehabilitation and Regenerative Medicine at NewYork-Presbyterian/Columbia University Irving Medical Center, has advocated exercise training interventions for patients with spinocerebellar ataxia, a form of hereditary ataxia characterized by balance problems and incoordination issues, slurred speech, nystagmus neuropathy, spasticity, muscle atrophy, and memory loss. 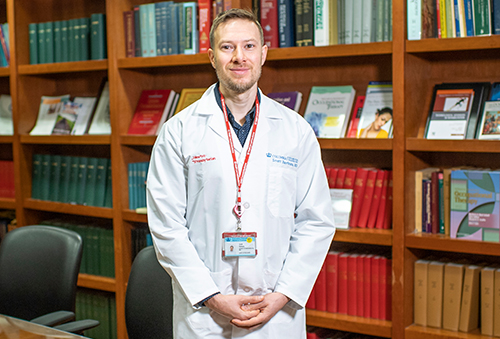 “Treatments for patients with ataxia are very poor,” notes Dr. Barbuto. “There are no FDA-approved medications, although there are several clinical trials ongoing. These patients are notoriously difficult to help with just simple physical therapy and balance training because many physical therapists report that they're not sure exactly what kind of exercise to prescribe. When a patient comes in with a stroke and they have weakness, the therapists know what to work on. But when a patient has a lack of coordination and balance due to ataxia, it’s much harder to decide what to do.”

Research has focused primarily on balance training for these diseases, notes Dr. Barbuto. Although results vary, balance training appears to improve ataxia severity if the participants challenge themselves sufficiently. “We don’t know what causes the improvement. Is it just that they learn to compensate for their deficit or is there something going on within the brain or disease process that’s still unknown?”

In earlier research, Dr. Barbuto and his colleagues in rehabilitation medicine at Columbia University and Weill Cornell Medicine conducted a study to determine the effects of aerobic exercise versus no training on cerebellar ataxia. “That study supported that intense aerobic exercise is acceptable to people with degenerative cerebellar disease. Adherence was high, with all participants exercising at least 30 minutes a day, three times per week,” says Dr. Barbuto. Training was limited to four weeks with weekly phone calls urging the participants to maintain the program.

“We found initially that the aerobic group did better with their improvement in ataxia than the balance group, though the two groups had equal improvement in gait speed and measurements of balance,” says Dr. Barbuto. In a three-month follow-up, the researchers learned that for those who stopped exercising improvement declined back to baseline.

“It seems you had to continue exercising if you wanted to maintain improvement,” says Dr. Barbuto. “In the balance training group, we also showed that if they trained five days a week, compared to three days, they had better improvement.”

From that study, Dr. Barbuto and his team moved on to a phase 2 study comparing balance versus aerobic training for a six-month duration, the results of which they are now formulating. “We’re finding that patients are trying to do the balance training at home, but they can’t challenge themselves too hard because they’re afraid of falling. Perhaps aerobic exercise might be better accomplished for these patients on an exercise bike where they are seated and there is no risk of falling. It might be just as beneficial for patients with these types of diseases who should be doing aerobic exercise every day.”

In the current study, a select number of patients were chosen randomly to undergo MRI scans to determine any changes in cerebellar volume between the two groups. “The results have not been manually reviewed yet but using a software that processes and analyzes MRI images, it appears that the individuals who performed the balance training program had a decline in cerebellar volume size after the six months. For those who did aerobic training, their cerebellum stayed about the same or got slightly larger. These changes were well within a one percentile range, so we’re talking about very small volumes.”