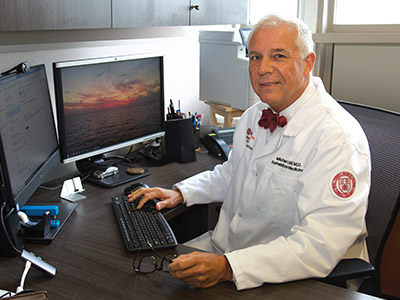 “They ran a very small shop before; it’s become hard to recognize the Department as compared to what it was in the old days. When Mike got here – and this was before my time – he really expanded it, bringing in neurological rehabilitation, establishing the inpatient unit, and building a culture of mentorship and community. It has been an outstanding run, and he will be sorely missed,” emphasizes Dr. Stein.

Dr. O’Dell himself reminisces on getting the role: “Of course, there were quite a few people interested in a job here. I was absolutely thrilled.”

His then-new colleagues shared in his joy. “It was instantaneous bonding for all of us in welcoming Dr. O’Dell. He was one of the most collaborative physicians with whom we had the opportunity to work, and he is a very strategic thinker, which helped us all to create the future of the Department,” says Delia Gorga, PhD, Associate Professor of Clinical Rehabilitation Medicine at Weill Cornell Medicine. “Before Dr. O’Dell joined the team, we had research on a small scale. But when he arrived, we developed more interdisciplinary projects, we wrote grants, and he got many, many clinical trials that required support from the therapists. It was a pleasure to develop those projects and see them through with him.”

Dr. O’Dell is nationally and internationally recognized for his clinical and research expertise in the rehabilitation of patients with stroke, multiple sclerosis, traumatic brain injury, and neurological diseases, which has resulted in extensive grant funding and nearly 90 peer-reviewed publications that focus on neuro-rehabilitation. He has also published more than 15 book chapters and dozens of abstracts, and has delivered professional presentations throughout the world in the area of neurological rehabilitation. 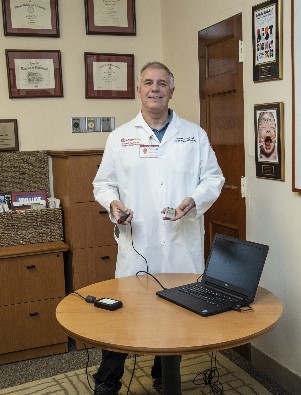 Among Dr. O’Dell’s most recent research is as a collaborator in the assessment of vagus nerve stimulation in a pivotal multicenter trial evaluating its efficacy when paired with rehabilitation for improving upper limb motor function after ischemic stroke, results of which were published in The Lancet in 2021.

More Than a Mentor

The most satisfying element of his work, Dr. O’Dell says, is mentorship, for which he was awarded the Dean’s Award for Excellence in Mentorship this year. 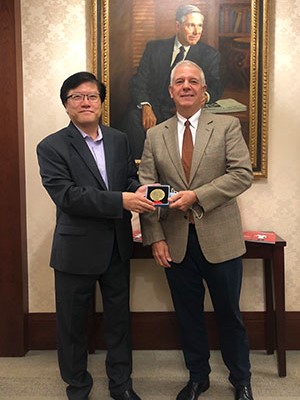 “It is rare to find a mentor capable of exhibiting both an incredible bedside manner and clinical acumen – all while being an unforgettably brilliant teacher,” says Paul Ryan Haffey, DO, physiatrist, Interventional Spine and Pain Medicine, Department of Rehabilitation and Regenerative Medicine at NewYork-Presbyterian/Columbia University Irving Medical Center and Assistant Professor of Rehabilitation Medicine at Columbia. “Rarer still is the individual who takes the time to get to know his trainees, and to instill in them a desire to emulate even a mere fraction of his magnetic charisma. And once in a lifetime do you find a mentor who embodies these attributes and shares the secrets of how to navigate a happy life – both inside and outside of medicine.”

“As a fourth-year medical student, I found interview season to be one of the most exhilarating, but also one of the most anxiety-provoking times of my life,” recalls David S. Cheng, MD, a physiatrist with the University of Southern California Spine Center and former Chief Resident in Rehabilitation Medicine at NewYork-Presbyterian Hospital. “In typical O’Dell fashion, he set me at ease and made me feel at home. Dr. O’Dell is not ‘just a brain doc,’ as he likes to say. He showed me what an academic physiatrist should strive to be: a compassionate provider, an inclusive team leader, a tireless patient advocate, an enthusiastic educator, a dedicated researcher, and a caring mentor. Congratulations, Dr. O’Dell, on your inspirational career as we celebrate you and all the lives you have touched and molded. I wish you an endless supply of ‘go juice’ and vodka martinis in your retirement.”

In addition to his mentorship role within the hospital, Dr. O’Dell initiated the Program for Academic Leadership within the Association of Academic Physiatrists in order to provide junior faculty members across the country with a structured educational and mentorship program that allows them to grow their academic careers. “It's been a hugely successful program,” says Dr. Stein.

Throughout his career, Dr. O’Dell served in leadership positions for national and international professional organizations and committees, including the American Academy of Physical Medicine and Rehabilitation and the Association of Academic Physiatrists. He has also served on scientific journal editorial boards and as a reviewer for numerous professional journals.

Beyond Dr. O’Dell’s unique dedication to mentorship is his continuity of practice and care. “This is classic Mike style,” says Dr. Stein. “Even as he’s preparing to leave his practice and pursue research entirely, Mike has already spent a lot of time working on a transition plan with our new physician, making sure she won’t miss a beat and that his good work is continued. He’s all about a positive handoff.”

Dr. Gorga elaborates on other ‘classics’ of Dr. O’Dell’s style, noting his “incredible sense of humor and ability to make you feel important. He would introduce me to new folks visiting the Department as ‘Delia Gorga, PhD, M-O-U-S-E,’ or if we were heading out to lunch he’d say ‘Lettuce grab a salad.’ We call these O’Dell-isms, while groaning and rolling our eyes.”

After Dr. O’Dell’s last day on August 17, his focus is physical fitness, heading to the Art Students League of New York for a live drawing class, exploring the Metropolitan Museum of Art, and traveling to Italy for a language immersion school, building on his last three years of lessons alongside Dr. Gorga. Come fall, his large social group will attend Broadway shows once again as they have been doing every season.

“Perspective from my work has really informed the outlook on the rest of my life. I’ve seen what my patients have gone through; life’s little annoyances become more insignificant. It’s quite inspirational – almost everyone who comes to us for care gets better. They may not be perfect, but they’ll be incrementally better than before.”