According to the Cystic Fibrosis (CF) Foundation Patient Registry, life expectancy of people with CF in 1995 was 32 years. Based on the Registry’s 2019 data, the life expectancy of those born between 2015 and 2019 was predicted to be 46 years. With continued advances in therapeutics, the outlook for individuals living with cystic fibrosis continues to improve, evolving from treatment primarily for acute illnesses related to CF to a focus on longer-term outcomes and extending survival.

“It’s a very exciting time to be a physician in the field of cystic fibrosis,” says Emily A. DiMango, MD, pulmonologist and Director of the Gunnar Esiason Adult Cystic Fibrosis and Lung Disease Program at NewYork-Presbyterian/Columbia University Irving Medical Center – a premier site in New York for the care and research of cystic fibrosis, bronchiectasis, and other respiratory disorders. “Just two years ago, we were very busy managing the myriad of symptoms as well as acute illnesses in our patients. Today, the disease has become much more controllable for most patients, particularly with the introduction of CF modulator drugs, which have been life-changing for patients.” 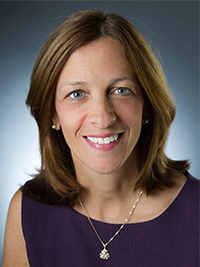 The Gunnar Esiason Adult Cystic Fibrosis and Lung Disease Program at Columbia is one of 130 centers accredited by the Cystic Fibrosis Foundation and among 90 centers participating in the Foundation’s Cystic Fibrosis Therapeutics Development Network, the largest cystic fibrosis clinical trials network in the world.

“Our program was established more than two decades ago and is extremely involved in clinical research,” says Dr. DiMango, who serves as Columbia’s principle investigator for the CF Therapeutics Development Network. “While our multidisciplinary team is critical for the clinical care of patients, it is also very important to have a vibrant research component to be able to offer state-of-the-art medications before they are even FDA approved. These trials are conducted in a very controlled setting and with the understanding that not every compound that’s tested is going to be effective.”

In October 2019, the FDA approved Trikafta®(elexacaftor/ivacaftor/tezacaftor) – the first triple combination therapy available to treat patients with the most common cystic fibrosis mutation, F508del. The safety profile of Trikafta was based on data in two trials involving 510 cystic fibrosis patients who had at least one F508del mutation in the cystic fibrosis transmembrane conductance regulator (CFTR) gene. While there are approximately 2,000 known mutations of the CFTR gene, the most common mutation is F508del.

Presence of the F508del mutation is estimated to represent over 90 percent of the cystic fibrosis population. The FDA granted the Trikafta application Priority Review, as well as Fast Track, Breakthrough Therapy, and orphan drug designation. The highly effective modulator therapy is proving to be a breakthrough therapy for many individuals for whom there previously were no approved therapeutic options.

Several months prior to FDA approval, Claire L. Keating, MD, Associate Director of the Gunnar Esiason Adult Cystic Fibrosis and Lung Program, and Dr. DiMango initiated a retrospective cohort study of 22 patients with advanced lung disease in their Adult Cystic Fibrosis and Lung Disease Program to evaluate short and long term clinical outcomes after one year of receiving elexacaftor/ivacaftor/ tezacaftor. This patient cohort was excluded from the clinical trials based on an eligibility cutoff for lung function, so effectiveness of the drug in these patients was not yet established. 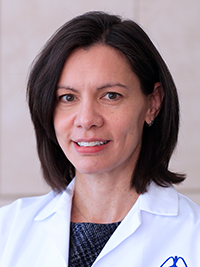 Presenting their results in a letter to the Annals of the American Thoracic Society in November 2021, the Columbia team found that all the patients demonstrated progressive improvement in weight, lung function, and patient-reported outcomes, as well as a large reduction in pulmonary exacerbations despite a 20 percent reduction in standard pulmonary CF therapies. There were no early concerns for safety or tolerability.

The researchers noted, “Most of the lung function improvement was in patients <40 years of age. This could be due to long-standing lung disease with more fixed changes in the older patients. In addition to overall improvement in lung function, quality of life scores showed that patients experienced progressive improvement over time. Four points on this scale is considered a minimum clinically important difference, and our small sample reported up to a 45-point difference at 6 months, which is considerably larger than the absolute increase of 20.2 seen at 24 weeks in the pivotal clinical trial.”

Notably, the need for oxygen decreased in five patients who required it and there were nearly 2.4 fewer exacerbations per patient, or a 63 percent reduction, in the 12 months after treatment compared with before treatment. The researchers added, “Our experience indicates this impactful treatment may ultimately delay the need for lung transplantation.”

“We are so proud to have participated in the clinical studies that made Trikafta, the newest CF modulator, a reality for patients,” says Dr. DiMango. “Trikafta improves symptoms and pulmonary function, reduces the infection rate, and hopefully slows down the progression of lung disease.”

Although cystic fibrosis is predominantly a disease of Caucasians, the proportion of affected patients who are of racial and ethnic minorities is increasing. With a relatively large minority population in the vicinity of NewYork-Presbyterian/Columbia University Irving Medical Center, Dr. DiMango and her Columbia colleagues sought to establish if racial and ethnic disparities in health outcomes exist and to further understand possible causes for any disparities.

“Even though nationally more than 90 percent of people with cystic fibrosis are taking Trikafta, we are very aware that a lot of minority patients do not qualify for the drug because they are less likely to have the genetic mutations that make them eligible,” says Dr. DiMango.

In their study, she and her team performed a cross-sectional analysis of health outcomes in Black/Latinx patients compared with non-Hispanic Caucasian patients who were cared for at Columbia’s Adult Cystic Fibrosis and Lung Disease Program. “We followed up on some 300 patients with CF and about 20 percent did not qualify for Trikafta because they did not carry at least one F508del mutation in the CFTR gene.”

In addition, the Columbia researchers note that other factors must be considered in addressing health disparities in the treatment of cystic fibrosis. “Even though it's predominantly a disease that affects Caucasians, we have found in our practice that minorities with CF have worse outcomes related to pulmonary function, weight, and survival. We need to figure out why,” notes Dr. DiMango. “Are disparities due to a biologic cause or related more to socioeconomic, social, and cultural issues? These factors need to be examined and addressed.”