In July 2106, the FDA approved the use of high-intensity focused ultrasound (HIFU), a noninvasive technology, for treatment of essential tremor. This was a particularly defining moment for Michael G. Kaplitt, MD, PhD, a neurosurgeon and Director of Movement Disorders at the Weill Cornell Brain and Spine Center, who was the first in New York to perform HIFU to relieve a patient’s essential tremor.

“Focused ultrasound has the potential to transform treatment by gaining access deep within the brain without harming healthy tissue,” says Dr. Kaplitt, who continues to evaluate the approach in a clinical trial. “It also enables surgeons to ablate targeted tissue without exposing the brain to the effects of ionizing radiation and makes possible the reversible opening of the blood-brain barrier to deliver therapeutic agents to targeted diseased areas.”

Performed while the patient is awake, focused ultrasound involves no anesthesia, no incisions in the scalp, and no burr holes through the skull or insertion of electrodes. During focused ultrasound therapy, target cells in the thalamus are visualized in real time using MR imaging. The highly precise treatment uses focused beams of acoustic energy to heat and destroy target lesions as small as one to two millimeters, thereby eliminating or greatly diminishing the tremor.

“Historically, we would make a hole in the skull and put a probe in and ablate the ventral intermediate nucleus [VIM] of the thalamus that is central to regulating the control of stability,” says Dr. Kaplitt. “That approach was then supplanted over the years by deep brain stimulation, which we’ve been doing for nearly 18 years at Weill Cornell. Brain stimulation gave us a little bit more flexibility intraoperatively. With focused ultrasound, however, we can actually lesion the abnormally functioning area of the brain completely noninvasively with MR thermometry, which allows us to measure the temperature inside the tissue to confirm its accuracy. We are also able to get real-time responses from the patient, so as we send more and more energy to the target, we can see the patient’s tremor becoming better.”

“While the VIM has proven to be an ideal target for tremor control using a number of minimally invasive techniques, delineating its anatomy is limited on traditional MRI sequences, resulting in technical challenges in selecting appropriate VIM coordinates to target this area,” explains Dr. Kaplitt. In a recent investigation, Dr. Kaplitt and his colleagues in radiology, neurology, neurosurgery, and anesthesia evaluated the utility of diffusion tensor imaging (DTI) tractography-based targeting of the dentatorubrothalamic tract (DRT) for MRI-guided focused ultrasound thalamotomy in a small sample of patients with essential tremor. Imaging findings provide a direct correlate to the clinical improvement of tremor.
A and B: Pre- and post-ablation DTI tractography overlaid on T2-weighted sequences. CST (red), ML (yellow), and corticothalamic tract (green) are shown from DTI. Post-ablation imaging reveals the T2-weighted hyperintense MRgFUS lesion in the location of the right DRT that could no longer be successfully tracked.
C and D: Results of the pre- and post-procedure Archimedes spiral drawing tests.
Source: Journal of Neurosurgery. 2017 Oct 20

On the Horizon for HIFU

With the success of HIFU with essential tremor, Dr. Kaplitt envisions potential applications for the treatment of other brain and movement disorders. “We have already demonstrated in our laboratory that we can expand the use of focused ultrasound to hone in on an exact location where we need to deliver gene therapy or chemotherapy, create temporary holes in the blood-brain barrier that normally prevents molecules from crossing from the bloodstream into the brain, then deliver the agents to the precise locations where they are needed,” he says. “This has tremendous implications not only for movement disorders, but also for Alzheimer’s disease, metastatic brain tumors, and other disorders that may benefit from our delivering genes and drugs to the exact location where they’re needed without invasive surgery.”

“There are going to be limitations to HIFU for some patients because of certain physical characteristics of their skull that make it difficult to perform the procedure,” continues Dr. Kaplitt. “Some patients may need it done on both sides of the brain, including the majority of Parkinson’s patients, and we don’t yet know if this is safe. It’s only approved for one side now.”

“I think over time as we understand more about ultrasound that this is where our field is going. The idea that we can move toward less-invasive surgical procedures for patients and they can get the same result without having their brain penetrated is obviously very attractive to them.”

Weill Cornell is about to begin a clinical study of HIFU for patients with Parkinson’s whose symptoms are predominantly on one side of the body, though as Dr. Kaplitt notes, deep brain stimulation therapy will still be a very valuable adjunct to Parkinson’s patients who have symptoms on both sides.

“These are exciting times in neuroscience, with new advanced treatments being developed at a rapid pace,” says Dr. Kaplitt. “Over the past 15 years, the Department of Neurological Surgery at Weill Cornell has led a revolution in the treatment of neurological diseases, from the first application of gene therapy to the human brain to pioneering work in new applications of brain stimulation and use of precise lasers for certain forms of epilepsy, and now HIFU. Ultrasound to treat tremor without surgery, gene therapy to change brain function in Parkinson’s disease, and lasers to eliminate sources of epilepsy truly sound like science fiction, and yet they are all examples of the cutting-edge treatments being brought to our patients.” 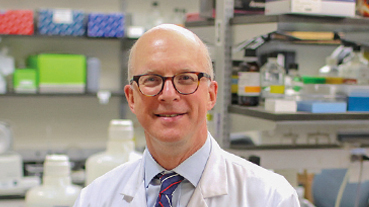 A Commitment to Conquering ALS

At the Eleanor and Lou Gehrig ALS Center at NewYork-Presbyterian/Columbia, clinicians and scientists are leading efforts to combat amyotrophic lateral sclerosis and other motor neuron diseases.
Learn More