It has been nearly 60 years since the first living donor kidney transplant was performed. In a presentation of outcomes of the earliest kidney transplants at a World Transplant Congress, data reported on 250+ kidney transplants showed the one-year survival rate was less than 10 percent if the patient received a kidney from a living donor. “And nobody survived if they received a kidney from a deceased donor,” says Manikkam Suthanthiran, MD, Chief of the Division of Nephrology and Hypertension and Chief of Transplantation Medicine at NewYork-Presbyterian/Weill Cornell Medical Center. “Transplantation was a high risk, experimental therapy. Many people thought that doing transplantation was even unethical and wanted no such programs in their hospitals. Nevertheless, several pioneers persisted and today, kidney transplant, and most other transplants, have a survival rate in excess of 85 percent.”

Over the past three decades, much of the progress in kidney transplantation derives from the groundbreaking research of Dr. Suthanthiran and his colleagues at Weill Cornell, where the success rate for kidney transplants is at 90 percent. Hospital stays have also experienced dramatic changes, down from two to three months to a current average length of stay of four to five days.

With that said, Dr. Suthanthiran notes that there are still challenges to be met. “First of all, any patient who has had a transplant will always be at risk for rejection,” he says. “The transplant can function beautifully for 10 years and the patient can still have a rejection that cannot be reversed. This is a major issue that remains to this day, and this is where transplantation precision medicine and the bench-to-bedside and bedside-to-bench continuum come into play. A second issue is that uncommon infections are common in transplant patients due to a lifetime of needing immunosuppressive drugs. And the third issue is that we are actually paying a price for our success in the sense that now that transplants bring longevity, our patients are increasingly susceptible to malignancy, and not just a local malignancy, but a cancer that is likely to metastasize.”

In his current research, Dr. Suthanthiran is targeting the immuno­suppressive drugs that can impede transplant patients from enjoying long-term good health. “For some time, it has been thought that these immunosuppressive drugs can make the patient an immunological cripple susceptible to cancer progression,” says Dr. Suthanthiran. In fact, he and his colleagues at Weill Cornell reported on their study in Nature nearly 20 years ago that showed one of the most important drugs used in transplantation, cyclosporine, has a direct effect on the cancer cell, making it more potent.

“We now know that there are other immunosuppressive drugs that fight fire with fire, using them to suppress the cancer cell,” notes Dr. Suthanthiran. “But there was no clinical yardstick to determine whether or not your patient is too immunosuppressed or not enough.”

This began to change for kidney transplant recipients in 2001, when Dr. Suthanthiran and his research team developed and validated urinary cell mRNA profiling of human kidney graft recipients. In 2013, the team demonstrated in the largest, NIH-sponsored Clinical Trials of Transplantation study to date that urinary cell mRNA profiles offer a noninvasive means of diagnosing acute rejection, providing a surrogate for transplant biopsy; can anticipate future development of acute rejection; and serve as a yardstick of in-vivo immune status of the kidney graft recipients (The New England Journal of Medicine). The breakthrough noninvasive test could detect whether transplanted kidneys are in the process of being rejected, as well as identify patients at risk for rejection weeks to months before they show symptoms. Their innovative discovery was recognized by the National Institute of Allergy and Infectious Diseases as one of its top 20 research advances for 2013, and in April 2014, the Clinical Research Forum selected the work as one of the Top 10 Outstanding Clinical Research Achievements in the United States.

In 2015, another study by the Weill Cornell researchers validated that a combination of urinary cell mRNAs and metabolites is diagnostic of acute cellular rejection in the kidney allograft with a high degree of accuracy.

More recently, Dr. Suthanthiran and his colleagues undertook a study to examine the causes and predictors of death-censored kidney allograft failure in light of corticosteroid-free maintenance immunosuppression regimens, now applied in many centers and which was adopted by the Weill Cornell kidney transplantation program in 2001. The retrospective study included 1,670 kidney recipients transplanted at Weill Cornell and identified 137 recipients with allograft failure, confirming their previous observation from a study of 634 kidney graft recipients that early corticosteroid withdrawal in recipients of renal allografts is safe and efficacious.

Causes of allograft failure, which were validated by physicians and confirmed by biopsy, were:

Importantly, the Weill Cornell investigators noted, “With growing emphasis on antibody-mediated rejection, we identified that acute cellular rejection continues to be an independent risk factor for graft failure. In addition to resolving leading causes of kidney allograft failure, the study suggests that novel approaches to target these post-transplant complications may help realize the full benefits of kidney transplantation.”

Research of the clinical application of urinary cell profiling for the individualized management of kidney allograft recipients continues in earnest by Dr. Suthanthiran and his colleagues. Currently, creatinine levels in the blood are used to monitor kidney allograft function, but studies have shown that changes in creatinine are not a sensitive marker for acute rejection in patients who are otherwise clinically stable. The current gold standard approach to diagnose acute rejection is an invasive needle biopsy. While this has become safer over the years, a biopsy still carries risk of bleeding, infection, arteriovenous fistula formation, and, although rare, allograft loss.

According to Dr. Suthanthiran, given the risks of the biopsy procedure and the need for continuous monitoring of kidney allograft status, the development of noninvasive biomarkers that are sensitive and specific for acute rejection would help avoid a for-cause biopsy to evaluate allograft dysfunction and also help manage immunosuppression over the life of the allograft.

To this end, the Weill Cornell team undertook a study to determine the feasibility of developing informative biomarkers of tolerance. Performing urinary cell mRNA profiling of 225 biopsy-matched urine specimens from 170 kidney allograft recipients, the researchers discovered a urine biomarker of allograft rejection and tolerance and also demonstrated the dominance of negative regulation (CTLA-4) over cytotoxic effectors (perforin and granzyme B).

“Identification of this marker enables us to technically say the patient is tolerant and begin to wean them from immunosuppressive drugs,” says Dr. Suthanthiran. “The ability to adjust and even minimize immunosuppression based upon noninvasive molecular and mechanism-based monitoring should help to personalize transplant medicine, enabling us to titrate the drugs so that the patient is adequately immunosuppressed. Some patients may need more and some patients may need less. It’s about the right drug for the right patient at the right time and at the right dosage.” 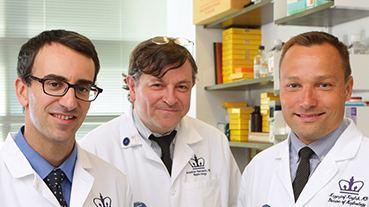 NewYork-Presbyterian/Columbia, a Kidney Precision Medicine Project recruitment site, is working to understand the cell types that are specific to kidney injury and can be targeted with new therapeutic agents.
Learn More