Pancreatic ductal adenocarcinoma (PDAC) is a highly aggressive and lethal cancer that is expected to be the second leading cause of cancer death in the United States by 2030. However, the overall survival following diagnosis has improved across all stages, particularly with early-stage pancreatic cancer. At this stage, cure involves surgery. Neoadjuvant treatment for patients with localized disease has increased the eligibility for patients to undergo surgery and has improved five-year survival rates to 39 percent. Despite this progress, most patients present with metastatic disease, leading to the undeniable conclusion that detecting pancreatic cancer in its early stages is key to survival. 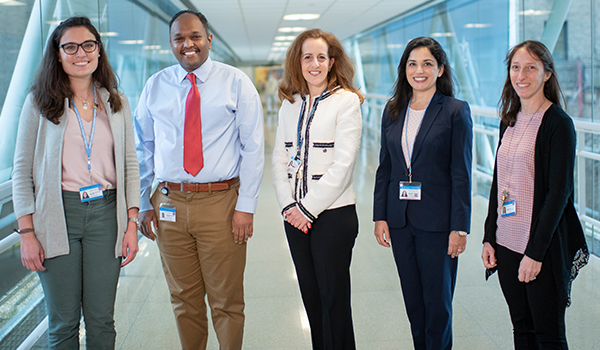 “Great progress has been made in the world of genetics and genetic testing with pancreatic cancer,” says Dr. Kastrinos. “This is a true strength of our Pancreas Center, and we are very invested in advancing this field particularly in light of the firm recommendation from the National Comprehensive Cancer Network in 2019 for universal genetic testing of every patient newly diagnosed with pancreatic cancer. If a patient is found to have an inherited cancer susceptibility not only can that potentially impact their treatment options, it also has implications for relatives who may be at risk. If family members were to undergo genetic testing for that newly identified familial gene, they would benefit tremendously from screening for the prevention of a number of cancers, including pancreatic cancer.”

“We have a very strong screening program at Columbia that focuses on individuals with particular inherited cancer susceptibility genes who are at an elevated risk of developing pancreatic cancer,” continues Dr. Kastrinos. “Using genetic testing as a risk assessment tool, we screen families and individuals who are as yet unaffected by cancer to help prevent them from developing it.”

“We refer to patients who have the gene but haven’t developed cancer as ‘previvors’ as opposed to having the cancer and then being defined as a survivor. The goal is to identify through these risk assessment tools as many previvors as we can to offer them preventative screening, early detection, and preventative strategies.” — Dr. Fay Kastrinos

“Pancreatic cancer can be associated with multiple familial cancer syndromes involving breast, ovarian, and colorectal cancers, as well as melanoma. The connections can be very broad,” says Dr. Rustgi. “Now, because genetic testing has expanded to where we can simultaneously test multiple genes associated with cancer, we have more information beyond family history to define at-risk families.”

A family history of PDAC presents an increased risk for the development of pancreatic cancer and the degree of this risk is influenced by the number of relatives affected by PDAC and their degree relation. For example, individuals with two first-degree relatives have an increased PDAC risk ratio of 6.4-fold, or a lifetime risk of 8 percent to 12 percent, whereas those with three first-degree relatives have an elevated risk ratio of 32-fold with a lifetime risk of 40 percent. In addition, an earlier age of developing PDAC confers an increased risk, where kindreds with PDAC diagnosed at younger than 50 years have a relative risk of 9.3.

Familial pancreatic cancer is defined as kindred with two or more family members with PDAC who share a first-degree relationship in the absence of other hereditary cancer syndromes. National Familial Pancreas Tumor Registry data suggests that familial clustering of PDAC cases is not due to chance alone, and that both genetic factors and environmental exposures play a role.

In their published review, the Columbia authors note that a family history of pancreatic cancer is reported in approximately 10 percent of patients with PDAC, with at least one first-degree or second-degree relative also being affected. Previous estimates of PDAC heritability ranged from 9.8 percent to 18 percent. A more recent estimate resulting from multigene panel testing was as high as 21.2 percent. The germline pathogenic variants most often associated with PDAC are BRCA2, PALB2, ATM, and CDKN2A; however, multigene panel testing has provided additional information regarding the spectrum of associated pathogenic variants and their correlating inherited syndrome.

Today the indications for genetic testing related to PDAC have changed given that certain germline mutation carriers have improved outcomes with targeted chemotherapeutic agents. Previously, only individuals with PDAC who have a family history consistent with a pattern for an inherited cancer syndrome met the criteria for germline genetic testing. However, these criteria were limiting, and it was shown that 50 percent of PDAC patients with actionable gene mutations would be missed using such guidelines.

“So much in the world of genetics depends on our collaborative efforts in identifying families and individuals at risk and then following them longitudinally to see whether screening recommendations makes a difference.” — Dr. Sheila Rustgi

However, experts have called for surveillance of high-risk individuals who generally have at least a 5-fold relative risk of PDAC, which primarily includes those with a familial or genetic predisposition. The benefits of surveillance in this population allow for the likelihood of downstaging the cancer, an important concern given how often PDAC is diagnosed at a metastatic stage. In a surveillance program, once a patient is identified as being at high risk for PDAC, they should be offered testing to identify high-grade dysplasia and early neoplasia when it can be resected and before it progresses.

In their review, the Columbia researchers summarized the following key clinical care points:

The Columbia team adds that further research of potential screening modalities, better assessment of additional risk factors to personalize surveillance, and the evaluation of continuing long-term surveillance data will help improve the management of high-risk individuals for the prevention and early detection of PDAC.

The published article by Dr. Kastrinos, Dr. Rustgi, and Ms. Hilfrank is the opening chapter of the book Inherited Gastrointestinal Cancers: Identification, Management, and the Role of Genetic Evaluating and Testing, An Issue of Gastrointestinal Endoscopy, for which Dr. Kastrinos served as Editor.