Estimates have shown that up to 29 percent of patients with colorectal cancer who present with a malignant obstruction will require emergency surgery, which traditionally has been resection with or without bowel diversion. This approach brings with it high rates of morbidity – up to 46 percent – and up to 28 percent mortality. High rates of intestinal stoma creation are also recorded in up to 20 percent of resected patients. 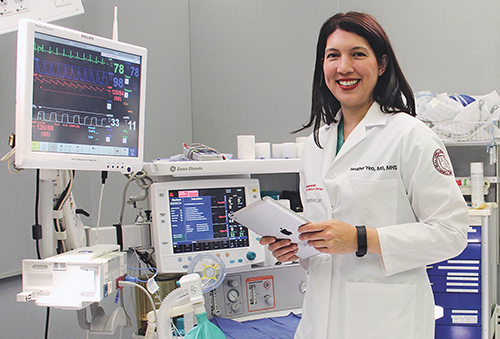 An alternative approach to relieve an obstruction for potentially resectable patients is the endoscopic placement of a stent across the obstruction typically followed by a resection within three weeks. This “stent as a bridge to surgery” gives the proximal colon time to decompress and possibly avoid the need to create a stoma. However, the stent approach versus immediate resection has drawn some controversy in initial research that cited high rates of perforation in the stenting group. Subsequent meta-analyses and population-based studies to assess stenting in patients with malignant large bowel obstruction have been inconclusive.

With that in mind, Heather L. Yeo, MD, MHS, MBA, MS, a colorectal surgeon and surgical oncologist at NewYork-Presbyterian/Weill Cornell Medical Center, led the first study to use propensity score matching to compare stenting followed by resection to emergency resection, with creation of a stoma as the primary outcome.

Using the New York State Statewide Planning and Research Cooperative (SPARCS) database, Dr. Yeo, in collaboration with colleagues in the Department of Healthcare Policy and Research at Weill Cornell Medicine, conducted a retrospective longitudinal cohort review of 3,059 patients with acute malignant large bowel obstruction between October 2009 and June 2016. The patients either had a stent followed by elective surgery within three weeks or underwent immediate resection. The primary outcome was the rate of stoma creation at index resection; secondary outcomes were 90-day readmission, reoperation, procedural complications, and discharge disposition.

In the study, the results of which were published in the March 2021 issue of the Journal of Gastrointestinal Surgery, 2,917 patients (95.4 percent) underwent a primary resection and 142 (4.6 percent) had a stent placement. After propensity score matching, 139 patients in each group had no differences in demographics, year of procedure, insurance status, tumor location, or comorbidity profile.

Dr. Yeo’s findings revealed that patients in the bridge to surgery group:

In addition, no differences were noted in the rates of 90-day readmission, reoperation, or procedural complications between the two groups.

Dr. Yeo and her team concluded that colonic stenting as a bridge to surgery leads to less stoma creation and a significant quality-of-life benefit compared to patients who undergo an immediate resection. They also noted, “While we show less stomas are created with stent and delayed resection compared with immediate resection, each patient and their individual clinical situation needs to be carefully considered before making the decision to use a stent as a bridge to surgery or take the patient for emergent surgical management.”