“In the field of abdominal wall surgery today, we are witnessing the creation and recognition of what we do as a specialty,” says Yuri W. Novitsky, MD, Director of the Comprehensive Hernia Center at NewYork-Presbyterian/Columbia University Irving Medical Center, and an internationally renowned expert in advanced laparoscopic and robotic surgery for complex inguinal and ventral hernia repairs. Dr. Novitsky and his colleague Dina Podolosky, MD, specialize in all aspects of hernia surgery and complex abdominal wall reconstruction. 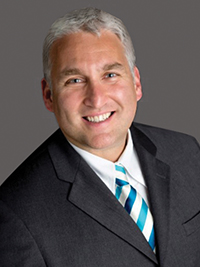 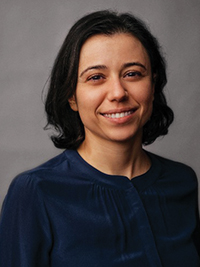 Dr. Novitsky has focused intensively on research to advance surgical technique and improve tissue response to surgical mesh. He has also pioneered techniques for minimally invasive ventral hernia repair and open abdominal wall reconstructions. The transversus abdominis muscle release (TAR) procedure, which he first described in 2006, has become widely adopted worldwide since the study’s three-year results were published in 2009.

“We approach almost every case with robotics as our first procedure method,” says Dr. Novitsky. “Robotics has changed our own personal algorithms in procedure and technique selection and we have a very precise knowledge of modern biomaterials. We feel robotics has significantly improved pre-existing laparoscopic techniques. It allows us to place the mesh outside the peritoneal cavity and facilitates the precise closure and reconstruction of abdominal wall defects. This type of surgery was very difficult, if not impossible, using the traditional laparoscopy of the early 2000s. With robotics we can address a broad range of hernias, from first-time to multiple recurrent repairs and everything in between.”

“What we bring in terms of innovation is the robotic approach to almost any type of surgical repair, and we do that consistently at Columbia,” adds Dr. Podolsky. “While laparoscopic surgery enables us to incorporate a minimally invasive approach, it is limited in terms of complex abdominal wall reconstruction such as the sewing on the ceiling of the abdominal wall and performing large hernia repairs with just a few small cuts. With robotic surgery nothing is off the table when it comes to minimally invasive surgery.” 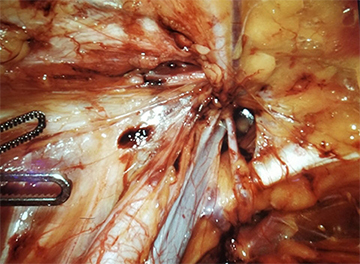 Both surgeons agree that with the full spectrum of techniques in their armamentarium, they are able to select the most appropriate procedure based on each patient’s hernia. “To have a successful operation, I break it down into three ingredients: the patient, mesh material, and surgical technique,” says Dr. Novitsky. “Surgical techniques vary from small operations using a few stitches to major procedures involving mesh. Our most important asset is the ability to separate layers of the abdominal wall to insert a prosthetic that is hidden away from the intestines and yet far away from the skin to prevent infections. Reliably achieving those spaces between the abdominal wall muscles is key. We create a pocket, suture the defect shut, and put in the prosthetic to reinforce as a patch. This leads to fewer long-term complications, including foreign body-related infections, and it doesn't interfere with subsequent operations.”

Dr. Novitsky notes, however, that not every patient proceeds to surgery early on. Some will require careful pre-operative preparation with imaging, counseling, weight loss, diabetes management, and smoking cessation to help optimize their outcome.

Reoperations for multiple recurring ventral hernias account for between 30 and 50 percent of the Hernia Center’s practice. “We see many patients who had previous surgeries with catastrophic complications in the abdominal wall. While hernias are quite common, trained specialists to treat them are still few and far between and we’re working to change that,” says Dr. Novitsky, who serves on the Executive Council of the American Hernia Society and its Practice Advisory Committee, which seeks to educate surgeons and improve hernia care nationally and internationally.

For basic umbilical hernias, Dr. Novitsky and Dr. Podolsky prefer to suture. “The data supports that the majority of people, even without a mesh, for these small, primary umbilical hernias, will be fine with just one or two sutures,” explains Dr. Novitsky. “We use very precise dissection techniques around the hernia defect to recognize what tissue is healthy enough to hold the suture. The procedure takes 30 minutes with no anesthesia. The recovery is days, and no narcotics are needed.”

Dr. Novitsky and Dr. Podolsky have particular expertise in treating hernias in young women of childbearing age and have written textbook chapters on the topic. “A very different approach is needed with this population,” says Dr. Podolsky. “You have to consider what could happen to their abdominal wall and their body if they’ve had a hernia repair and then become pregnant. The pregnancy itself stretches the hernia repair so they’re at a higher risk for the hernia returning after their pregnancy. We would rather defer the more complex or mesh-based repairs for when they no longer plan to have children. That type of thinking is very new.”

In traditional practice patterns, says Dr. Novitsky, mesh has been used for many years and the data still supports its use in different scenarios, for example, incisional hernias. “We believe in the benefits of a mesh. But it should be used sparingly and only when necessary. Our philosophy is to avoid the largest possible operation the first time because we think these smaller repairs will not cause complications. They’re not going to cause pain and infection, but they might, in a small proportion of patients, result in another operation.”

Hernia as a specialty is now coming into its own. “The thinking has been that ‘It’s just a hernia.’ But it is a complex problem that requires in-depth understanding of the pathology itself, as well as a comprehensive knowledge of surgical options and training in complex techniques,” says Dr. Novitsky. “Hernia can be a multi-level problem that if not managed appropriately can lead to devastating complications for patients.”

In the November 16, 2021, issue of Surgical Endoscopy, Dr. Novitsky, Dr. Podolsky, and their Columbia colleagues identify trends in component separation utilization among various cohorts of practicing surgeons who are members of the Americas Hernia Society. “We looked at training, procedure, mesh choices, and criteria for patient selection and how they affected postoperative care and recovery,” says Dr. Podolsky. “Our findings indicated that component separation procedures among surgeons vary greatly. While posterior component separation was the most commonly used technique, especially by hernia/high-volume surgeons, differences existed in mesh utilization between high-volume and low-volume surgeons.”

The authors noted the following trends derived from the responses of 275 surgeons who identified themselves as a general surgeon (66 percent) or a hernia surgeon (28 percent) included:

The authors concluded, “Despite its prevalence, CS training, indications/contraindications, and patient selection must be better defined.”

“This is such a dynamic and rapidly developing field that we expect that the advances available for hernia surgery in 2022 will be surpassed by what emerges by 2025 or 2030,” says Dr. Novitsky, who has counseled companies to better understand the technical and material needs of hernia surgeons. “My optimism stems from watching Dr. Poldosky learning the craft and then using her skills to lead robotic training for Columbia’s surgical residents. Her interest and expertise in robotics have made her a leader in robotic training. Watching the fellows excel upon graduation in their careers is the ultimate satisfaction.”