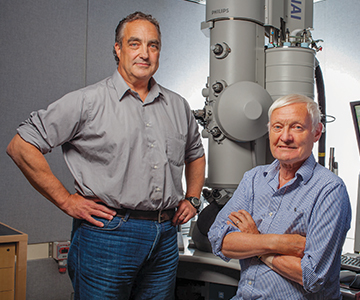 RyRs/calcium release channels — first visualized in 1988 by Joachim Frank, PhD, using electron microscopy, and cloned in 1989 by Dr. Marks — belong to a family of intracellular channels that control muscle contraction. The two major types, RyR1s and RyR2s, are found in skeletal muscle cells and heart muscle cells, respectively. Leaky RyRs have been implicated in a variety of conditions, including age-related muscle weakness, muscular dystrophy, and heart failure.

In 2016, using high-resolution electron microscopy, Dr. Marks and his colleagues Wayne A. Hendrickson, PhD, and Joachim Frank, PhD, professors at Columbia University Department of Biochemistry and Molecular Biophysics, uncovered new details of the structure and function of the RyR1 intracellular channel, which controls the contraction of skeletal muscle. In the two years since, the ability to see the channel in such detail has been helping Dr. Marks and his colleagues further elucidate how the channel functions in normal conditions and how it malfunctions in disease states. “Most important, these insights have greatly improved our ability to design new drugs to treat a range of muscle diseases,” says Dr. Marks, who is also the founding director of the Clyde and Helen Wu Center for Molecular Cardiology at Columbia.

The process toward disease begins when the brain sends a signal to a skeletal muscle cell, changing the voltage across the cell membrane. The voltage change activates RyR1 channels, which are located in a calcium-storage organelle called the sarco/endoplasmic reticulum. When activated, the channels open the organelle’s floodgates and release calcium into the cell body, triggering muscle contraction.

In a previous study, published in Nature, Dr. Marks and his team used an advanced electron microscopy (EM) technique called cryo-EM, combined with computer modeling, to determine the 3-D structure of the RyR1 channel in its closed state in which no calcium is allowed out of the sarco/endoplasmic reticulum.

The 2016 study provided the first images of the RyR1 channel in the open state, as well as in various conformations in which it has changed shape but not yet opened. “Rather than having a static picture of the channel, we could now make movies of a sort showing how various parts of the molecule are moving around,” adds Dr. Frank, who, in 2017, shared the Nobel Prize in Chemistry for the pioneering contributions he has made to advancing visualization techniques, including cryo-EM, of biological molecules.

“With this information, we can begin to understand how ligands regulate ryanodine receptor activity,” says Oliver B. Clarke, PhD, a postdoctoral fellow at the time of the study and now an Assistant Professor of Physiology and Cellular Biophysics at Columbia. “This may eventually help us develop improved therapeutics to treat diseases where RyR-mediated Ca2+ ‘leak’ is a contributing factor.”

Dr. Marks has already developed drugs that target malfunctioning RyR channels. Studies have shown that these drugs can increase muscle force in animals with age-related muscle weakness or Duchenne muscular dystrophy and improve heart function in animals with heart failure.

In the two years since the 2016 study results were published in Cell, Dr. Marks and his colleagues have continued to build on their work. Most recently, they have demonstrated that RyR PKA hyperphosphorylation, which causes “leaky” channels, can deplete sarcoplasmic reticulum calcium and trigger fatal cardiac arrhythmias, and they identified the ryanodine receptor calcium leak in circulating B-lymphocytes as a novel biomarker that can be used for monitoring response to pharmacologic and mechanical therapy for congestive heart failure.

Steven O. Marx, MD and Geoffrey S. Pitt, together and individually, are making major contributions to understanding the role of ion channels in normal and pathological conditions in the heart.
Learn More