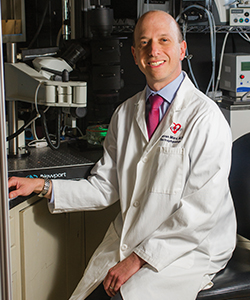 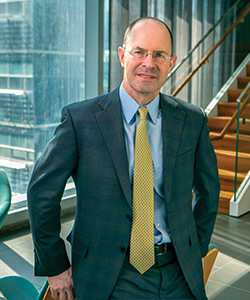 Heart disease remains the leading cause of death for both men and women in the United States and worldwide. Sudden cardiac death claims the lives of 350,000 Americans each year and about 2,220 people die from heart failure, heart attacks, heart valve problems, and other cardiac conditions every day. Many of these events occur as a consequence of inherited arrhythmias that cause dysfunction of ion channels, or channelopathies.

Steven O. Marx, MD, Director, Cardiology Fellowship Program, NewYork-Presbyterian/Columbia University Irving Medical Center, and Geoffrey S. Pitt, MD, PhD, Director, Cardiovascular Research Institute at Weill Cornell Medicine, together and individually, are making major contributions to understanding the role of ion channels in normal and pathological conditions in the heart. Dr. Marx and Dr. Pitt first began working together at Columbia when they were both on faculty there. Their collaborations continued when Dr. Pitt moved to Duke University as Director of its Ion Channel Research Unit and today, they have two major collaborative grants and several papers emanating from their labs involving sodium channels in the heart and the brain and calcium channels in the heart.

“The beating of the heart is essentially based upon a coordinated program of ion channels opening and closing,” explains Dr. Marx. “Ion channels are the key for regulating so much of what the heart does, including initiating and controlling its contractions, electrical activity, and pumping action. With the heart so dependent upon ion channels, we are trying to make a difference in treating some of the basic cardiac diseases by studying these small, little ‘machines’ that command so many of the heart’s functions.”

Dr. Marx and his colleagues had previously demonstrated that specific sequences within the ion channel recruit regulatory proteins that modulate the ion channel function in normal and pathologic conditions. They are now pursuing studies focused on the regulation of ion channels by macromolecular complexes – the naturally occurring machines inside cells. “We are seeking to understand the molecular components and functional implications of macromolecular complex formation of the large conductance calcium-activated potassium channel and the L-type voltage gated calcium channel,” notes Dr. Marx.

Their work has had significant impact in understanding the triggers of fatal cardiac arrhythmias and mechanical dysfunction in heart failure. Current investigations are very likely to impact the understanding of control of peripheral blood pressure by the sympathetic nervous system.

According to Dr. Marx, the heart poses a unique set of challenges for basic researchers. “It’s actually impossible to grow adult cardiac myocytes in a culture,” explains Dr. Marx. “They either die or they de-differentiate so that they no longer are similar to native heart cells. That’s why many of us use animal models, creating various transgenic and knockout mice to study electrophysiologic and contractile properties.”

The work of Dr. Marx, Dr. Pitt, and their research teams with transgenic mouse models has enabled them to manipulate the ion channel profile to study how the heart works under normal conditions, mechanisms of disease, in particular, arrhythmias, and approaches for repair or treatment. In fact, by creating transgenic mice with various mutations, the researchers were able to achieve an unprecedented and massive increase in throughput. This allowed them to study how the calcium channel is regulated in the heart related to heart rate and contractility with “paradigm shifting results,” which they describe in a paper published in the August 22, 2017 issue of the Proceedings of the National Academy of Sciences. 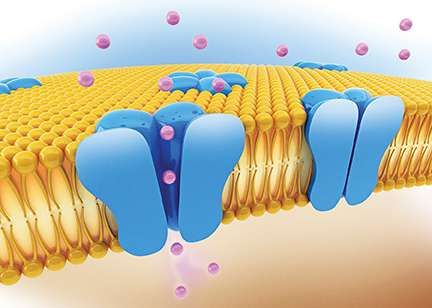 Computer illustration showing ion channels (blue) embedded in a cell membrane (yellow). Ion channels are pore-forming proteins that help establish and control the small voltage gradient across the plasma membrane of all living cells by allowing the flow of ions (purple) through them down their electrochemical gradient.

The research challenged the four-decade-old theory on the mechanism related to the fight or flight response that releases adrenalin from the body and causes the heart to beat stronger or faster. “It’s always been known that the calcium channel in the heart is one of the proteins that changes, but the mechanism by which it changes has been quite controversial since it was first discovered,” says Dr. Pitt, a co-author on the study. “But Dr. Marx’s lab essentially finally put to bed the idea that this protein was modified through phosphorylation, the leading hypothesis for many years. They were able to show definitively that this is unlikely to be the case.”

Dr. Pitt’s research has produced many important findings in understanding the structure and function of ion channels and their regulatory subunits in the heart and brain. His groundbreaking work in electrophysiology, biochemistry, and structural biology has illuminated several mutations that lead to inherited channelopathies, such as ventricular tachycardia and epilepsy, and has begun to point to potential therapies for such conditions. His lab has also helped define mechanisms underlying diseases such as congenital heart defects and other neurological disorders such as ataxia.

“In particular, we seek to understand the disease processes in order to eventually develop therapies to correct abnormal electrical activity that is due to mutations in the ion channel proteins,” says Dr. Pitt. “The ion channels that regulate electrical activity are prevalent not only in the heart, but also in many other tissues, most commonly, for example, in the brain. Individuals with mutations in these genes can get epilepsy – which you can think of as an arrhythmia in the brain – or certain neuropsychiatric disorders. Even though I’m a cardiologist, I actually spend a fair amount of time looking at neuropsychiatric and neurodegenerative disorders as they relate to the dysfunction of these proteins.”

Dr. Pitt’s quest to discover the underlying genetic cause of the ion channel abnormalities not only has potential for targeting therapy for patients, but also has implications for family members. “If we can identify the specific mutation that’s driving this process we can offer the family the opportunity for genetic testing,” he says. “Children can be told that they never have to worry, even though their mom or dad has it, because they did not inherit that mutation. On the other hand, if the child or a relative has the mutation, we can hopefully offer screening, other types of management, or therapeutic opportunities to help them.”

Ion channels are one of the more druggable classes of proteins, notes Dr. Pitt. “There are a lot of drugs already on the market to treat cardiac arrhythmia, to treat epilepsy, and to treat pain that target an ion channel,” he says. “That demonstrates that there are opportunities to develop new medications to fix the abnormal ion channel. And in a number of cases, we’ve been able to pull a drug off a shelf that’s being used for treating something else once we understand what the particular mutation is doing to cause problems to that ion channel.”