Renowned cardiothoracic surgeon Stephanie L. Mick, MD, has joined the Department of Cardiothoracic Surgery at NewYork-Presbyterian/ Weill Cornell Medical Center as Director of Robotic and Minimally Invasive Cardiac Surgery. comes to NewYork-Presbyterian/Weill Cornell from the Cleveland Clinic, where for nearly a decade she achieved national recognition for performing a range of cardiac procedures, particularly with robotic surgical approaches. Additionally, Dr. Mick served as the Surgical Director of the Transcatheter Aortic Valve Replacement Program.

Dr. Mick’s appointment is especially gratifying, she says, as New York is where she received her undergraduate degree in philosophy at Columbia University and went on to earn her medical degree at Weill Cornell Medical College. There she was awarded the Janet M. Glasgow Memorial Award given to the female medical student with the best graduating academic record. Dr. Mick completed her internship and residency in general surgery at NewYork-Presbyterian/Weill Cornell and was presented with the Chief Residents’ Award for Clinical Excellence. During her residency, she also pursued a three-year postdoctoral research fellowship with an interest in vascular biology at New York University School of Medicine, returning to Weill Cornell Medicine to complete her chief residency in general surgery. This was followed by subspecialty training in cardiothoracic surgery at Brigham and Women’s Hospital.

Dr. Mick recalls a defining moment that occurred during general surgery training at Weill Cornell when she encountered the beating heart during a lung operation and had an epiphany that the heart was her passion. “My decision to become a heart surgeon that day began a journey that would take me to other world class institutions where I gained experience and expertise, especially in minimally invasive and robotic heart surgery,” says Dr. Mick. “To my great happiness, the journey has led me back to where it all started, Weill Cornell.

With clinical expertise in structural heart disease, Dr. Mick has a particular focus on the mitral and aortic valves. “My interest is in treating diseases of those valves with minimally invasive techniques if possible,” says Dr. Mick, who performs robotic mitral valve repairs, as well as other minimally invasive procedures to treat the valve surgically. “As a cardiac surgeon and a member of the Weill Cornell Valve Center, I have an active role in the treatment of patients who aren’t well-suited for surgery but might benefit from a percutaneous approach to treat the heart valves.”

Dr. Mick believes a renewed interest in robotic surgery techniques for mitral valve repair is due in part to the development of transcatheter aortic valve replacement (TAVR). “People are keenly interested in having their heart valves fixed less invasively now,” she says. “I think patients’ desires, and even those of doctors, is to pursue alternative ways to conventional open heart surgery.”

However, Dr. Mick emphasizes the importance of patient selection to maximizing outcomes for robotically assisted mitral valve surgery. While at the Cleveland Clinic, Dr. Mick and her colleagues conducted a study of 1,000 consecutive cases that showed these surgeries were effective and safe in terms of improvements in procedure time, transfusion rates, stroke risk, number of mitral valve replacements, and number of conversions to sternotomy. After 500 cases, the research team developed and implemented a patient-selection algorithm that refined the criteria for determining which patients would be eligible for mitral valve repair via the robotic approach versus a sternotomy-based approach.

“The algorithm relies on results from echocardiography and CT for most of the selection process,” explains Dr. Mick. “Echocardiography results that indicate a sternal approach would be preferred include significant aortic insufficiency, which complicates cardioplegia delivery, as well as severe mitral annular calcification, rheumatic heart disease, left ventricular dysfunction, and pulmonary hypertension. CT results assess patients for aortoiliac atherosclerosis, small femoral artery diameter, and pectus excavatum. The existence of any of these indicates that a patient is more appropriate for the sternal approach than the robotic approach.” 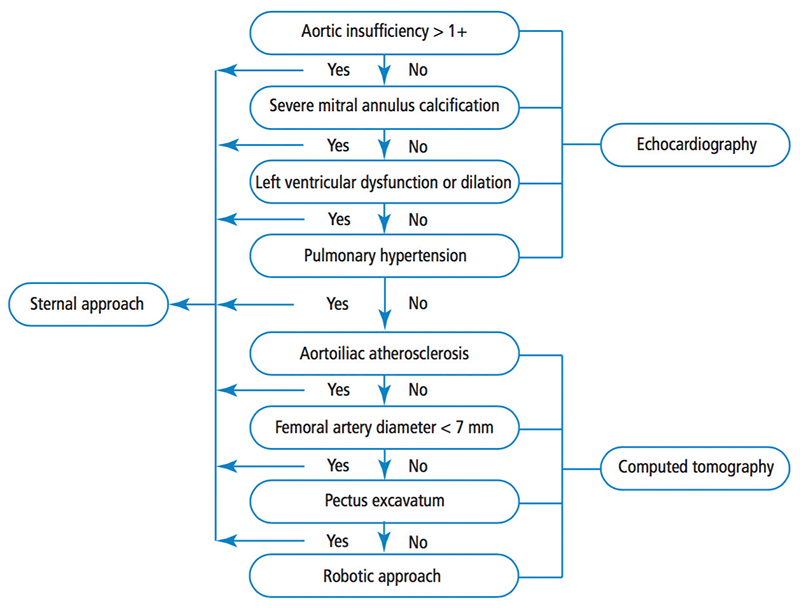 Following implementation of the algorithm with cases in the second half of the study, the stroke rate decreased by more than half and mitral replacement dropped from four to zero. The researchers concluded “that a combination of a focused preoperative assessment using the patient selection algorithm and increased surgical experience with robotic techniques enhanced clinical outcomes and improved procedural efficiency associated with robotically assisted mitral valve surgery.”

Dr. Mick enumerates the key benefits of robotic surgery for mitral valve repair beginning with eliminating the need to open the chest through the breastbone, thereby decreasing risk of infection and pain after surgery and accelerating the time to return to normal activities. Robotics also provides the surgeon with clearer access to the affected valve, including subvalvular apparatus. “To repair the valve, you have to be able to see it really well; the robot magnifies the view 10 times and it can also be visualized in 3D,” she says.

Much of Dr. Mick’s research centers on the optimization of robotic mitral valve repair. Among her investigations was a large clinical trial with her colleagues at the Cleveland Clinic showing that del Nido cardioplegia, previously only used in children, was also safe to use in adults. “You aren’t just stopping the heart, but you’re also actually feeding the heart with the cardioplegic solution,” explains Dr. Mick. “Inadequate cardioplegia can result in damage to the heart. When giving cardioplegia during minimally invasive surgery, and particularly in robotic surgery, conventional cardioplegia has to be given every 15 to 20 minutes. This can disrupt the flow of the surgery and extend the time it takes to complete the surgery. The benefit of using del Nido cardioplegia is that you only have to use it once every few hours, which helps to optimize the procedure. We weren’t the first to use del Nido cardioplegia in adults, but our investigation was the largest to study it. That study, in fact, has changed the practice of cardiac surgery worldwide.”

According to Dr. Mick, despite the potential benefits of a robotic approach, there has been a reluctance in its widespread adoption due to concerns over increased operative and crossclamp times as compared to conventional sternotomy approaches. In an article published in Seminars in Thoracic and Cardiovascular Surgery, she and her mentor Dr. Marc Gillinov and mitral valve team colleagues at Cleveland Clinic identified opportunities to improve the efficiency of robotic mitral valve repair by the application of five innovations and surgical strategies.

Suturing the annuloplasty in place with nonabsorbable 2 preknotted sutures in a running fashion reduces the number of manually tied knots, and therefore the time, necessary to complete the mitral valve repair while ensuring a sturdy annuloplasty suture line

Direct Venting Through the Mitral Valve

Applying carbon dioxide insufflation throughout the procedure into the chest at 6 L/min, left lung recruitment, and placement of an additional basket vent across the mitral valve deep into the left ventricular cavity expedites deairing and the return of cardiac rhythm and function

“While the progress in mitral structural heart disease with percutaneous approaches has been much slower than TAVR, I think the role of minimally invasive surgery for mitral valve disease will remain very strong for a long time to come,” she says. “There are a number of devices being developed and tested for the mitral valve. We will have more options for patients that might include additional percutaneous techniques, particularly for patients who can’t have surgery. TAVR basically just exploded and took over surgical aortic valve replacement. I don’t think that same trend will occur with the same speed in the mitral area, but that will be the area of intense focus going forward. That’s why it’s nice for me to be involved in both. As a heart surgeon today, it’s no longer enough to focus only on open surgical procedures. You need to know all of the different approaches to address a particular kind of structural valve disease.”

Dr. Mick is equally comfortable operating in the realm of percutaneous, robotic, and minimally invasive cardiac surgery. “From a technical standpoint my top priority is to provide safe and effective surgical treatments to my patients in the least invasive way possible. From the human perspective, I take a personal approach to patient care and consider it my privilege to shepherd people through the major life event of undergoing cardiac surgery.” 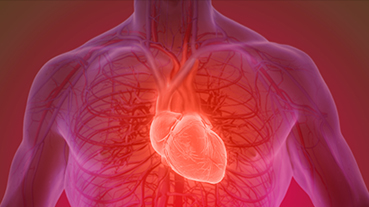 Martin B. Leon, MD, Director of the Center for Interventional Vascular Therapy at NewYork-Presbyterian/Columbia University Irving Medical Center, has been awarded the 2019 Lifetime Achievement Award by the American College of Cardiology (ACC) in honor of his contributions to the field of interventional cardiology.
Learn More