Columbia researchers led a clinical trial of selinexor, the first of a new class of anti-cancer drugs, which was able to shrink tumors in almost a third of patients with recurrent glioblastoma. The results of the international phase 2 trial were published in the January 10, 2022, issue of Clinical Cancer Research. 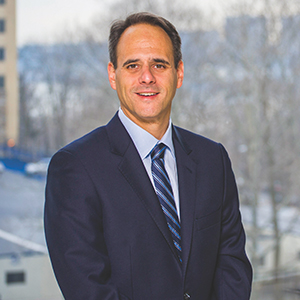 “Glioblastoma is an incurable brain cancer that needs new therapeutic approaches. Considering that few treatments have any measurable effect on recurrent glioblastomas, the results are encouraging,” says the study’s leader Andrew B. Lassman, MD, Chief of the Neuro-Oncology Division in the Department of Neurology at NewYork-Presbyterian/Columbia University Irving Medical Center. “The drug induces a response in certain patients, and several trial patients stayed on selinexor for more than 12 months, including one for over 42 months.”

Figure 1: 36-year-old man with IDH wild-type MGMT promoter methylated GBM, treated with selinexor on Arm D, given as second-line therapy after progression of disease to radiotherapy and temozolomide.

Figure 2: 64-year-old man with IDH wild-type and MGMT promoter unmethylated GBM, treated with selinexor on Arm D, given as third-line after progression of disease despite radiotherapy and temozolomide (first-line) and experimental AKT inhibitor combined with mTOR inhibitor (second-line).

Magnetic resonance contrast-enhanced axial T1 images taken throughout the course of treatment are shown after subtotal resection of recurrent GBM (A), and further increase in tumor size ~3 weeks after the post-operative MRI as a new baseline (B), the patient received selinexor on Arm D, and a durable partial response (C) was observed beginning ~73 weeks after starting selinexor with a maximum tumor size reduction of 72 percent. At the time of data lock, treatment of this patient continued through Karyopharm's Expanded Access Program (KEAP), and he remained in a partial response after 42 months of selinexor when data collection ceased.

Selinexor, an oral medication, inhibits exportin-1 (XPO-1), a major exporter of proteins from the nucleus to cytoplasm that is overexpressed in many cancers, including glioblastoma. Exportin inhibition results in retention of various tumor suppressor proteins in the nucleus, inducing reactivation of tumor suppressor function as well as other antineoplastic effects. Selinexor was approved by the FDA for the treatment of refractory multiple myeloma and relapsed/refractory diffuse large B-cell lymphoma and had pre-clinical activity against glioblastoma models.

Columbia researchers led a clinical trial of selinexor, the first of a new class of anti-cancer drugs, which was able to shrink tumors in almost a third of patients with recurrent glioblastoma.

Dr. Lassman, who is also the Associate Director for Clinical Trials at the NCI-designated Herbert Irving Comprehensive Cancer Center and Associate Dean of Clinical Trials at the Columbia University Vagelos College of Physicians and Surgeons, led the trial to identify the optimal dosing schedule and evaluate the safety and efficacy of selinexor in adults with recurrent glioblastomas whose cancer had progressed following initial treatment. Reduction in tumor size was observed in 28 percent of patients, and a tolerable dose was identified for future human trials already ongoing at Columbia and collaborating sites. 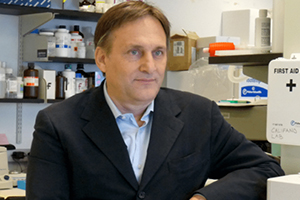 Under the leadership of Andrea Califano, Dr., Chair of the Department of Systems Biology at Columbia, a robust set of molecular correlative analyses was performed, including an effort to identify a molecular signature in baseline tumor tissue that is predictive of patient benefit from selinexor. The analyses were conducted by external researchers utilizing methodologies developed by Dr. Califano’s Systems Biology Lab at Columbia.

Drs. Lassman, Califano, and others are planning to validate this signature in a subsequent trial of patients with newly diagnosed glioblastoma with support from the William Rhodes and Louise Tilzer-Rhodes Center for Glioblastoma at NewYork-Presbyterian.

“Taken together, we believe that our findings show that selinexor is an active drug in some patients with glioblastoma and is worthy of further study,” says Dr. Lassman.

An ongoing trial at Columbia is also evaluating the safety and efficacy of selinexor in combination with standard-of-care therapies for patients with newly diagnosed or recurrent glioblastoma.