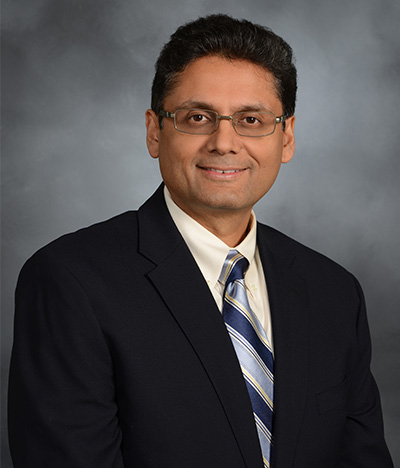 A Promising Treatment for Esophageal Cancer

The results of a phase 2 clinical trial led by Weill Cornell investigators may offer a new therapeutic approach for some patients with advanced, metastatic esophageal cancer, a population for whom there are currently limited treatment options. In the study, published in the December 20, 2018, issue of JAMA Oncology, the investigators report clinical evidence that pembrolizumab (Keytruda) shows promise for treating patients whose disease progressed after receiving two types of combination chemotherapy. Pembrolizumab belongs to a class of drugs that activates immune cells to attack cancer by blocking the interaction between PD-1, a molecule on immune cells, and PD-L1, a molecule on other cells, including tumor cells.

The single-arm clinical trial enrolled 121 patients from 57 sites in 10 countries across the globe. Treatment with pembrolizumab led to regression of esophageal cancer tumors in 10 percent of all patients and in 14 percent of patients, or 8 of 58, whose tumors expressed the PD-L1 protein. Although responses were pronounced in patients with PD-L1-positive tumors, the researchers observed antitumor activity regardless of PD-L1 status, suggesting that pembrolizumab could be effective in a broad range of patients. Among the patients who did respond to treatment, some have been without any progression of their cancer for more than a year, which the researchers say is unheard of for these patients. Metastatic esophageal cancer is a fatal disease with overall survival ranging from 10 to 12 months. First-line therapy calls for conventional chemotherapy, which is largely used to relieve pain, and has sparse evidence of long-term benefit. Few patients whose disease progresses after two or more lines of therapy — less than 15 percent of the patients who received first-line therapy — receive additional treatment.

“ Among the patients who did respond to treatment, some have been without any progression of their cancer for more than a year, which is unheard of.”
— Manish A. Shah, MD

Based on these results, the Weill Cornell investigators are assisting Merck, which provided pembrolizumab for the trial and funded the study, to petition the U.S. Food and Drug Administration to approve the use of this drug in esophageal cancer patients whose disease has progressed after two or more lines of therapy. Pembrolizumab is currently approved for cancer patients with PD-L1-positive recurrent or advanced gastric or gastroesophageal junction adenocarcinoma who have received multiple rounds of chemotherapy, as well as for other cancers, including melanoma, lung, and cervical cancer.

While uveal melanoma is considered rare — affecting about 6 per million people in the United States — it is, in fact, the most common primary intraocular malignancy in adults. Although current immunotherapies have led to remarkable improvements in the treatment of cutaneous melanoma, researchers have yet to find an effective therapy for patients with metastatic uveal melanoma. Indeed, the outlook for patients with systemic uveal melanoma is dismal, with a one-year survival rate of approximately 40 percent and with no therapy that has meaningfully improved outcomes — that is, until now.

“ A 73 percent one-year overall survival rate in heavily pretreated patients is quite notable, and we are excited about the continued development of IMCgp100 for patients with this disease.”
— Richard D. Carvajal, MD 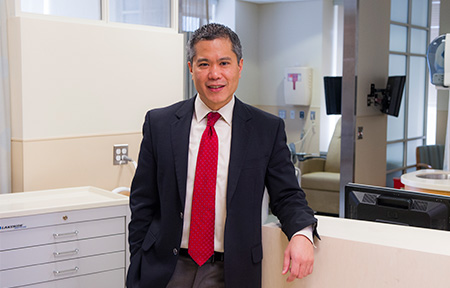 Among 35 patients in the two studies with advanced uveal melanoma, the overall one-year survival rate was 73 percent, nearly double the survival rate of what has previously been observed. The most common side effects of treatment were rash, itchy skin, and swelling. A larger pivotal randomized phase 2 clinical trial of IMCgp100 in advanced uveal melanoma is now underway to further evaluate efficacy.

In another investigation, a Columbia researcher serves as a principal investigator of a multicenter phase 1b clinical trial for a first-of-its-kind, new class of drug treatment for primary uveal melanoma — light-activated AU-011. AU-011 is a targeted therapy administered through an intravitreal injection and consists of viral nanoparticle conjugates that bind to cancer cells in the eye. The drug is then activated with an ophthalmic laser, destroying the membranes of tumor cells. This clinical trial is evaluating the drug’s safety, immunogenicity, and preliminary efficacy in two dose levels. Interim data reported has showed that AU-011 was well-tolerated, patients had stable disease, and vision was preserved in the vast majority of patients. The investigators hope that AU-011 will be able to be used for small primary melanomas early on and hopefully decrease the amount of patients that develop advanced metastatic disease.

“ With a rare orphan disease like uveal melanoma, our mission is to bring together different institutions to find a cure. We need more numbers, more data, and more people to contribute as a ‘one mind group’ in order to get further ahead more quickly.”
— Brian P. Marr, MD

Columbia ocular oncologists are also investigating immune markers within uveal melanoma that are specific to this diagnosis and that have already been explored in investigations of skin melanoma. Uveal melanoma is genetic-specific and breaks down to four subsets of this disease, some of which have infiltrating lymphocytes. In cutaneous melanoma, if this occurs it is a good sign, while in uveal melanoma, it is not. The researchers are trying to discover the discrepancy between the two diseases to see if certain drugs can target that pathway and if turning it on or off makes a difference. If it does, they hope to select patients with this type of immune signaling to target their specific tumor makeup. 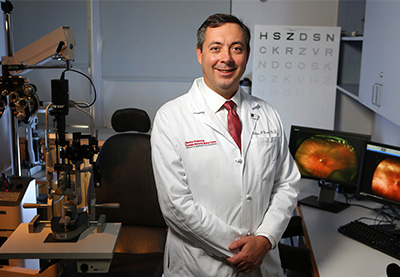 Columbia faculty are leading global efforts to combat this disease, including the International Rare Cancer Initiative, a joint initiative between the National Cancer Institute, the European Organization for Research and Treatment of Cancer, and Cancer Research UK, to enhance international collaboration in the conduct of clinical trials for uveal melanoma. Through organizations such as these, Columbia faculty are currently developing a global registry of patients with uveal melanoma that will collect invaluable disease data and support the collaboration of patients, caregivers, clinicians, researchers, and industry to find a cure.

Weill Cornell scientists have shown that adverse conditions within ovarian tumors cause detrimental stress responses in T-cells, a process that paralyzes them and enables the disease to flourish unchecked. Their study, published in the October 10, 2018, issue of Nature, shows that ovarian cancer inhibits the T-cells’ activity by disturbing the equilibrium of their endoplasmic reticulum (ER), the cellular component that is responsible for assembling proteins. This renders the T-cells unable to seek and destroy tumor cells and may explain why ovarian cancers do not respond well to current immunotherapies such as checkpoint blockade. 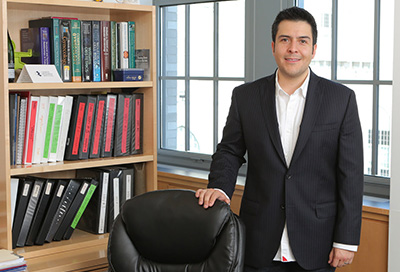 When T-cells reach ovarian tumors, they quickly are rendered unable to kill cancer cells, and until now scientists were not entirely sure why. Previous studies have shown that the tumors starve the T-cells of glucose, their main source of energy. Under these circumstances, cells should be able to turn to glutamine, an alternative energy source. But when the Weill Cornell team examined T-cells in ovarian cancer specimens, they discovered that the particularly harsh conditions in these tumors altered the ER’s normal function. In this environment, the T-cells cannot import glucose, which is a nutrient necessary for the ER to engage in protein glycosylation, a key step in protein folding and function in the cell. This provokes misshapen proteins to accumulate and turns on stress responses driven by the IRE1α-XBP1 pathway. When this pathway is chronically turned on in the absence of glucose it becomes harmful to the T-cells as it prevents the use of glutamine as a potential energy source.

When the investigators looked at what happens to the course of ovarian cancer in mice that were genetically engineered to lack the IRE1α-XBP1 pathway in T-cells, they found that the T-cells were better able to fight the tumors and the rodents survived longer than normal mice with ovarian cancer. They then exposed human T-cells to malignant fluid collected from patients with ovarian cancer and treated the cells with a small-molecule inhibitor that shuts off IRE1α-XBP1. Halting this pathway allowed the T-cells to use glutamine as an alternative energy source and regain their normal activity.

The Weill Cornell researchers will next investigate if drugs that block IRE1α-XBP1 can enhance the effects of current immunotherapies, new information that might also be useful to improve the efficacy of emerging cellular immunotherapies.

The results of an early clinical trial led by Weill Cornell radiation oncologists have shown that combining radiation with ipilimumab, an immune system-boosting therapy, in lung cancer patients has led to regression of metastatic tumors not targeted by the radiation.

Ipilimumab, a monoclonal antibody approved by the FDA for melanoma, renal cell carcinoma, and a subset of metastatic colorectal cancers, was previously shown to be ineffective by itself in lung cancer. However, preclinical studies in mice by the investigators showed that combining ipilimumab with radiation led to robust anti-tumor immune responses. In a phase 2 clinical trial involving 39 patients with chemoresistant metastatic non-small cell lung cancer, the researchers irradiated one metastatic tumor during ipilimumab therapy. The combination induced objective responses in 18 percent of the enrolled patients. To identify markers that predict which tumor would respond, the investigators explored many features of the tumors and immune cells circulating in the blood and found that those patients whose tumors did respond had an increase of the protein interferon-beta. It is the first study in humans to reveal a potential biomarker to help investigators identify the pathways that are involved in the synergy of radiation with immunotherapy. Their findings were published in the November 5, 2018, issue of Nature Medicine.

The team’s preclinical and human studies had previously elucidated how tumors that were irradiated produce interferon-beta, which makes them look to the immune system as virally infected tissues, leading to activation of T-cells. This mechanism may help explain, at least in part, why radiation made ipilimumab more effective. To enhance the proportion of patients with tumors responsive to this novel strategy, the researchers have initiated a new trial to test the combination of focal radiotherapy and the blockade of two immune checkpoints — CTLA-4 and PD-1.