What the Scientists Have to Say

In their efforts to understand, diagnose, and ultimately treat Alzheimer’s disease, Lawrence S. Honig, MD, PhD, and colleagues in the Alzheimer’s Disease Research Center at Columbia University Irving Medical Center remain cautiously optimistic that the next five years will bring important breakthroughs. “We are in a new era in our understanding of the fundamental causes and risk factors of Alzheimer’s, in clarifying how it relates to aging, in diagnosing the disease, and in developing therapeutic interventions,” says Dr. Honig, Director of the Center’s Clinical Core, and Professor of Neurology in the Gertrude H. Sergievsky Center and Taub Institute for Research on Alzheimer’s Disease and the Aging Brain at Columbia. 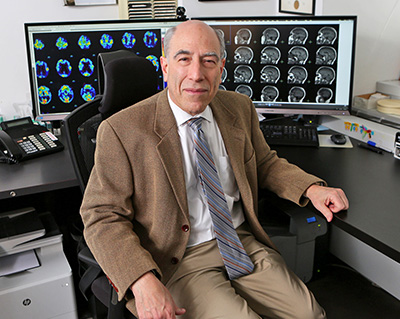 “Increasingly, research is showing that biomarkers are extremely valuable in assisting with diagnosis of the disease,” says Dr. Honig. “Structural, functional, and molecular imaging are among the most promising areas of research focused on early detection of Alzheimer’s. Even the basic imaging modalities, such as MRI, recognize patterns of shrinkage in the brain that are strongly suggestive of Alzheimer’s. However, we now often use advanced imaging methods. With positron emission tomography [PET], we previously only had metabolic imaging using labeled glucose. But now we have a variety of molecular imaging tools. Amyloid imaging, where we can actually image the amyloid plaques in the brain, has been approved by the FDA for a few years now. What is clear in the past year or two is that we can also image other proteins involved in neurodegeneration, most notably, the tau protein. This protein can be seen in the brain of living patients using a variety of still investigational agents, such as flortaucipir and other radiopharmaceuticals.”

According to Dr. Honig, cerebrospinal fluid (CSF) testing is also now routinely used in the diagnostic process. Alzheimer’s disease in its early stages causes changes in CSF levels of tau and beta-amyloid, two proteins that form abnormal brain deposits present in the brains of persons with Alzheimer’s. In a study published in the Journal of Alzheimer’s Disease in 2018, Columbia researchers examined elevated total tau (tTau), 181-phosphorylated tau (pTau), and amyloid-β42 (Aβ42) in CSF to determine their overall accuracy in a clinical setting for the diagnosis of Alzheimer’s. The study concluded that CSF biomarkers for Alzheimer’s showed a high sensitivity in accordance with previous studies, although not as high specificity for differentiating the disease from other types of dementia or mild cognitive impairment. 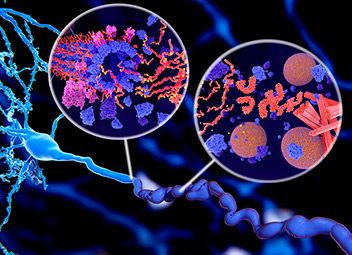 “The biomarkers that we see in the spinal fluid convey much information,” says Dr. Honig. “The other purpose for testing CSF is to make certain that we don’t have some other process going on, such as Lyme disease or inflammation.”

“We are increasingly using markers to assist us with the diagnosis of these diseases of aging,” continues Dr. Honig. “Every year there is also increased knowledge coming from genetic markers. While applying that knowledge to clinical diagnosis, for the most part, is still not there, understanding genetic markers is very useful to our research.”

Dr. Honig also conducts a number of clinical drug study trials with colleagues at Columbia and from around the world. “Over the past 20 years we’ve had five FDA-approved treatments that are modestly helpful in improving the symptoms of Alzheimer’s disease,” he says. “Four of these drugs are in common use; however, the key features of those drugs are that they’re modest and they’re symptomatic — they don’t modify, slow down, stop, or reverse the disease process. They may ameliorate the symptoms and may help individuals improve their performance to a small degree, but not because they are reversing the disease process.”

Dr. Honig asserts that there are not yet any agents proven to prevent amyloid-beta plaques from building up, or the formation of neurofibrillary tangles. “But there are many active investigations targeting amyloid-beta, tau tangle formation, and downstream effects of neurodegeneration,” he says. “Although we do not yet have anything that can affect that basic disease process, which, as far as we can understand, starts with the buildup of amyloid.”

“There are other drugs that we’re working with, including crenezumab and gantenerumab, that are promising in terms of interacting with the amyloid. We are hoping to demonstrate that they might slow down disease.”
— Dr. Lawrence S. Honig

Dr. Honig recently served as first author in a multicenter study of solanezumab, a monoclonal antibody that binds to amyloid-beta, for mild dementia due to Alzheimer’s. While the results of the study, which were published in The New England Journal of Medicine in January 2018, were disappointing, Dr. Honig is undeterred. “Solanezumab did not show enough efficacy to allow us to say that it worked, but there were some signs in the data that, perhaps, we were slightly affecting the disease process,” he says. “And there are other drugs that we’re working with, including crenezumab and gantenerumab, that are promising in terms of interacting with the amyloid. We are hoping to demonstrate that they might slow down disease.”

In fact, in 2018 alone, supported by both NIH and industry grants, four new multicenter clinical trials for Alzheimer’s disease were initiated to test new agents for prodromal to mild Alzheimer’s disease, and others are ongoing and scheduled for completion over the next two years.

“It’s like the Wright brothers and the airplane. The first step is getting it off the ground — period — even if it’s only for a few feet,” says Dr. Honig. “It’s incredibly frustrating for patients, families, physicians, and investigators — here and elsewhere — that we haven’t yet come up with that first step of conclusively having an agent that can beneficially affect the progression of the disease. But there is every reason to believe that we will have such an agent that we might be able to manipulate, fine-tune, and further develop toward making a significant impact on the course of the disease.”