An Answer for Intractable Seizures

Josh Stabile is no stranger to health challenges. As an infant, he had a double inguinal hernia. At four he was diagnosed with dilated cardiomyopathy, and at six he underwent a heart transplant at NewYork-Presbyterian/Columbia University Medical Center. Within days of the transplant, he had a stroke, followed by years of seizures. In 2012, while in college, he was diagnosed with post-transplant lymphoproliferative disorder for which he underwent a stem cell transplant in 2014. Mr. Stabile, 27, has met each medical hurdle with grace and determination, buoyed by family and friends and a network of physicians in multiple specialties at NewYork-Presbyterian/Columbia.

“I’ve been told by a number of people that I’m a success story,” says Mr. Stabile, who returned to school, graduating this past spring. “I want to show people that, yes, it is possible to get through these things. I’ve had a lot of people backing me up.”

All of his health issues had been managed well, save for the intractable epileptic seizures, which led him to neurologist Carl W. Bazil, MD, PhD, Director of the Columbia Comprehensive Epilepsy Center. “I first met Josh in October 2015,” says Dr. Bazil. “My first thought was I hope we can do better than this because he has made it through incredible health complications and now what’s holding him back is refractory epilepsy. For individuals like Josh who have been on a number of medicines and have never been completely controlled, the first thing that we ask is could they be a candidate for epilepsy surgery, such as focused laser thermal ablation. If they are, that approach has by far the best chance of taking somebody who has continued seizures to being seizure free.” 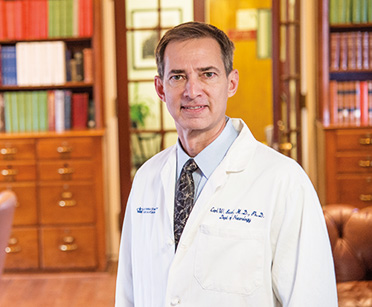 Dr. Bazil first wanted to verify that Mr. Stabile did indeed have epilepsy. “There are people not dissimilar to Josh who have had a diagnosis of epilepsy for years and it turns out to be something else, which is why the medicines don’t work,” he says.

Dr. Bazil and his team recorded several of Mr. Stabile’s seizures through video-EEG monitoring and determined they were originating from the right temporal lobe. “We confirmed with MRI that Josh had mesial temporal sclerosis, meaning that the seizures were coming from deep within the temporal lobe, an area of the brain that encodes memory. We have to be very careful verifying the origin of the seizures to be certain that surgery is not going to cause more problems than it is going to fix.”

Two things were in Mr. Stabile’s favor, notes Dr. Bazil. “The seizures were on his nondominant side and surgery would be much less likely to result in any memory problems that could be perceived. We also had started performing laser ablation at Columbia the year before. Previously the standard operation was to remove the entire temporal lobe to get to those deep structures causing the problem. Our neurosurgeons had been doing it successfully for more than two decades. But, as a neurologist, I know that bad brain is a problem, but good brain, no matter what, you would rather leave intact. So, laser ablation always made sense to me.” 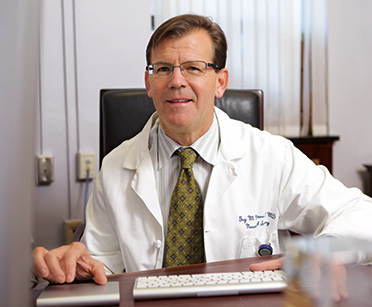 Guy M. McKhann II, MD, Director of Epilepsy and Movement Disorder Surgery at NewYork-Presbyterian/ Columbia, performed the MRI-guided laser interstitial thermal ablation in June 2016. “Recent advances in this therapy, particularly the ability to monitor the ablation in real time under MRI, have improved the safety and efficacy of this procedure,” says Dr. McKhann.

Through a 3-millimeter incision, a laser probe is placed into a seizure focus to destroy the tissues causing the seizures. “We get an updated MRI image every several seconds that shows the exact temperature of the brain where you are applying the laser,” says Dr. McKhann. “Real-time temperature maps allow us to monitor the area being heated and destroy the lesion without damaging the surrounding healthy brain tissue.”

“Since my surgery, neurologically I’ve been just about fine,” says Mr. Stabile. “I did have one seizure, but it was after a busy week in the city. I had walked over 10,000 steps, had three doctor appointments, and saw two Broadway shows. We figured I had just gone into overload.”

“The laser ablation, which is relatively new and not offered by many epilepsy centers, enabled this young man to have his seizures controlled with limited removal of brain,” notes Dr. Bazil. “We have also been able to reduce his medications.”