A Stroke Team Mobilizes into Action 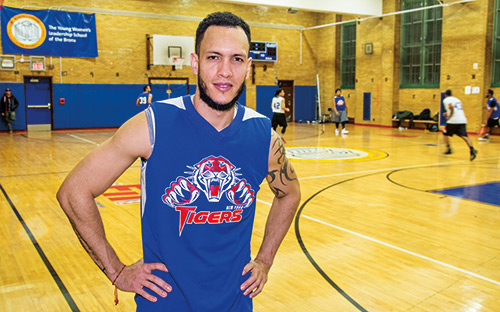 On January 10, 2017, at about 6 pm, Dionisio Robles had just finished making dinner for his mother’s birthday at her home in the Bronx. After eating, as he sat dozing on the couch, his sister noticed something was very wrong.

“I awoke and was talking in a mumble,” says Mr. Robles, now 34. “The side of my face was drooping and I also couldn’t control my left arm or leg. My sister immediately called 911 and explained the symptoms. When the ambulance arrived, I remember I was mad because I didn’t know that something was happening with me. I thought they were joking. Then I saw my mother crying and that’s when everything got me worried.”

Mr. Robles was taken to the emergency room of NewYork-Presbyterian Allen Hospital, a NewYork- Presbyterian site located at the northern tip of Manhattan, where the stroke page was activated at 7:40 pm, 10 minutes after his arrival. A CT scan was immediately ordered.

“ We’re constantly refining the system. Our times are getting stronger and stronger. In every case, such as Mr. Robles’, we perform a very detailed, critical analysis of every link in the chain of stroke action. We’re always looking to address any kinks in any of those links.”
– Dr. Olajide A. Williams 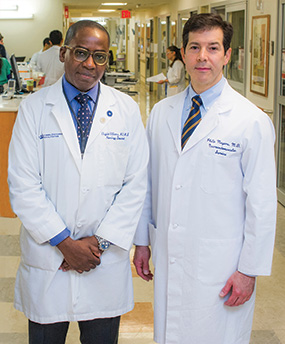 “Mr. Robles was confused, slurring his speech, and he had spatial neglect of the left side of his face. His left arm and left leg were also paralyzed,” says Olajide A. Williams, MD, Director of Acute Stroke Services at NewYork-Presbyterian/Columbia University Medical Center. On the NIH Stroke Scale, Mr. Robles was rated 11, signaling a significant stroke. After 5 pm, all acute stroke consultations at NewYork-Presbyterian Allen are performed via telemedicine with NewYork-Presbyterian/Columbia. A Columbia neurologist received the stroke page and logged on remotely. After reviewing the results of the CT scan, he instructed that Mr. Robles be given IV tPA, the first line of treatment to start the clot dissolution process. The time was 8 pm. The CT scan did not reveal any hemorrhaging or a brain tumor, however, a CT angiogram revealed complete occlusion of the right middle cerebral artery. The interventional team at NewYork- Presbyterian/Columbia, 50 blocks south, was alerted and an ambulance was arranged to take the patient directly to the interventional neuroradiology suite.

“I got the call and our team came rushing in,” says Philip M. Meyers, MD, Clinical Director of the Neuroendovascular Service at NewYork- Presbyterian/Columbia. “It’s a sizeable group. We have an anesthesiologist, a neurointerventional/ neurosurgical physician, a neurosurgery fellow or resident on call, an RN, a technologist, and a surgical technician. It’s fairly labor intensive to make all of these things happen quickly. But as soon as they see the large artery blockage, the clock starts ticking. We’re rushing to set up and get ready for the patient.”

“When EMS took me to Columbia at 168th Street they were checking on my legs and it was hard for me to move,” says Mr. Robles. “I was really worried. They made the trip in about six or so minutes. Even the police were helping with traffic.”

Arriving at NewYork-Presbyterian/Columbia by 8:30 pm, Mr. Robles was taken directly to the interventional suite where Dr. Meyers and his team were preparing to perform a thrombectomy with an endovascular stent-based retriever.

“It is unlikely that tPA will actually open a large blood vessel that is blocked,” says Dr. Meyers. “We’ve discovered in a series of clinical trials since 2015 that patients do much better if you pull the clot out and reopen the blood vessel. We plucked out the clot with a stent retriever and the patient’s blood flow was completely restored.”

A year since his stroke, Mr. Robles is feeling well and regaining his strength through regular exercise, including playing in a community basketball league. “The running is great for my circulation,” says Mr. Robles, who was diagnosed with cardiomyopathy, which the physicians believe was responsible for his stroke.

On the advice of his cardiologist he has given up driving an 18-wheel truck that required long periods of sitting. “I decided to return to school to study business administration and spend my time on something positive,” he says.

“We have put together a rigorous and highly coordinated system of stroke care,” notes Dr. Williams. “To see it work so beautifully for a young father of three is a particular source of pride for me and for everybody who was a part of the team. His was destined to be a colossal stroke that would have either killed him or put him in a nursing home. It’s remarkable because Mr. Robles went from being paralyzed and having severe slurring of speech to walking out of the hospital almost as if nothing had happened.”

“We’re constantly refining the system,” continues Dr. Williams. “Our times are getting stronger and stronger. In every case, such as Mr. Robles’, we perform a very detailed, critical analysis of every link in the chain of stroke action. We’re always looking to address any kinks in any of those links.”