Feeling the burn? Ways to calm effects of acid reflux 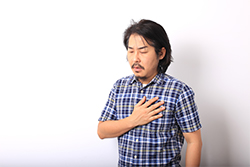 Most of us can relate: that occasional feeling of heartburn or a burning pain that moves from the stomach to the chest. Or that sour or bitter-tasting acid that backs up into the throat. The symptoms are uncomfortable, to be sure, and the condition most likely causing them is acid reflux (gastroesophageal reflux disease or GERD). Sixty percent of the adult population will experience some type of gastroesophageal reflux disease within a 12-month period according to the National Institutes of Health.

Acid reflux occurs when stomach contents irritate the esophagus. Typical symptoms include heartburn and regurgitation. Either together or alone, once the symptoms of acid reflux become bothersome to the patient, he or she can be diagnosed with the condition.

Usually the esophagus is protected from the highly acidic contents of the stomach. The lower esophageal sphincter muscle is normally tight enough to prevent reflux. However, once muscle tone loosens, reflux follows.

Some diseases and certain medications can exacerbate the symptoms of acid reflux. Nicotine can cause a loosening of the esophageal sphincter muscle, and being overweight can disturb the normal workings of the gastroesophageal system.

The resulting symptoms can include a burning midline chest pain that often gets better with antacid medication; the regurgitation of sour or bitter fluid that comes up from the stomach into the throat or mouth; and excess salivation. Symptoms can occur outside of the esophagus as well.

Cough, chest pain, laryngitis, and asthma symptoms can occur concurrently in patients with acid reflux. Concurrent symptoms that are more concerning include anemia, problems swallowing, vomiting and weight loss. Years of acid reflux can even damage the lining of the esophagus and lead to precancerous changes called Barrett esophagus.

There are well-known foods that can trigger acid reflux. Some examples include:

Treatments depend upon severity of symptoms

In certain cases where proton pump inhibitors are ineffective, a doctor may recommend a surgical procedure known as fundoplication. This is typically a laparoscopic technique where the upper portion of the stomach is wrapped around the lower portion of the esophagus. This tightens the lower esophagus so that food and fluid can go down into the stomach but cannot flow back up into the esophagus, reducing acid reflux.

Keeping the “burn” at bay