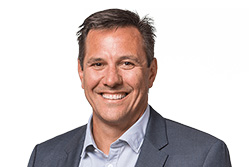 May 24, started like any other day for 48-year-old Richard Mandaro. The father of teenage twins went to his early morning fitness class before getting on the Long Island Railroad to head into the city for work. But something happened when he got off the New York City Metropolitan Transit Authority 7 train at Grand Central.

“As I was coming out of the subway, I felt my right hand getting ice cold. I started feeling odd,” he says.

“I thought, maybe it was because I didn’t have breakfast, so I went to the coffee cart on the corner near my office. I was waiting on line, still not feeling well, so I started leaning on cart,” he adds. “When I got to the window, I put my hand in my pocket to get my money, and I couldn’t feel anything. I could see the money in my pocket, but I couldn’t feel it. It was like an out of body experience. Then unknowingly,  someone told me I dropped my money on the sidewalk.”

With the assistance of some passersby, Richard was able to collect his money to pay for his regular order, all without saying a word to the coffee vendor. With coffee in hand, Richard was able to walk to his office building and made his way up to the law firm where he works as an intellectual property litigator.

“I got up to my office and sat down at my desk hoping I would feel better. But a few minutes later I knew something still wasn’t right.  I heard two secretaries talking outside of my office. I tried to call to them to get help, but I couldn’t say anything. That’s when I really got scared.  I was able to get up and went to them to try to speak, but nothing was coming out right,” he remembers. “That’s when they called 9-1-1.”

When the city’s emergency medical service paramedics arrived, they determined he was having a stroke, which caused him to develop aphasia—the inability to comprehend or formulate language because of damage to the brain.

“One of the EMTs said to me, ‘I heard of this really cool mobile stroke unit, I’ve never seen it, but it’s supposed to come with a doctor on board, a CT scanner, and they can give you medicine for a stroke right on sight. Do you mind if I call it?’ I gave him the thumbs up.”

In 2016, NewYork-Presbyterian—in partnership with Weill Cornell Medicine, Columbia University Medical Center, and the Fire Department of the City of New York—launched the first mobile stroke treatment unit (MSTU) on the East Coast. The MSTU is intended to provide immediate care to people who may be having a stroke by cutting down the time to treatment.

For people having a stroke, the amount of time between the onset of symptoms and treatment plays a significant role in outcomes. It is estimated, the typical stroke patient loses 1.9 million neurons each minute in which a stroke is untreated. Each hour the stroke goes untreated, the brain loses as many neurons as it does in almost four years of normal aging, according to the American Stroke Association.

“By the time the EMTs got me packed up, on a stretcher and down to the lobby, a NewYork-Presbyterian neurologist was there. The EMT updated the doctor on my status, and he took over from there,” Richard remembers.

In the mobile stroke unit, the technician began a computerized tomography (CT) scan of Richard’s brain, which was then transmitted to the hospital, where the emergency medicine doctors at the hospitals were preparing for his arrival. He was given clot-busting medication, tPA, to help break up any blood clots in his brain and avoid any additional strokes from occurring.

“On the way to the hospital, I immediately felt the medication working. I started feeling better, and my speech began to get better” he says. “I got the tPA within 75 to 78 minutes after my first symptoms, which was so important because it’s not effective after three to four hours. Timing is everything, that’s why this mobile stroke unit is great because it gets treatment to people earlier.”

Once he arrived at the NewYork-Presbyterian/Weill Cornell Medical Center, Richard got a magnetic resonance imaging (MRI) test which confirmed his stroke and was transferred to the neurologic intensive care unit (ICU).

“One of the neurologists who treated me, Dr. Halina White, wanted to know why a young guy like me would have a stroke. In my case, she thought I might have a patent foramen ovale (PFO) that caused the stroke.”

A PFO is a hole in the heart that occurs after birth when the foramen ovale doesn’t close completely. All fetuses have the foramen ovale—it allows blood to bypass the fetus lung, which cannot work until they are exposed to air—that closes within a few months of birth. However, for about 25 percent of people, the PFO does not completely close. In a majority of cases, an open PFO isn’t a problem, but for some the hole serves as a portal for blood clots to travel from the heart to the brain, causing a stroke.

“When they did the MRI, they saw where I had the stroke in the left side of my brain but they also saw another part of my brain where I had a previous stroke, which I didn’t know about. The doctors were overly concerned. So, they did a lot of tests to find out why I was forming these blood clots,” he says. “Dr. White recommended having a heart sonogram. That didn’t find the PFO initially.”

He later underwent a transesophageal echocardiogram (TEE), a test that uses high-frequency sound waves to produce detailed pictures of the heart, which found the PFO. Richard was referred to an interventional cardiologist, who performed the PFO closure at NewYork-Presbyterian/Columbia University Medical Center.

Since his stroke and subsequent procedures, Richard is getting back to his regular life — helping to raise his children, working, and working out.

“Since May I’ve been a medical wonder,” Richard jokes. “It makes you appreciate that everything is OK.  I’m extremely thankful for the amazing medical care and treatment I’ve received.”

To learn more about the mobile stroke treatment unit, visit nyp.org/stroke. To find a neurologist, call 877-697-9355.