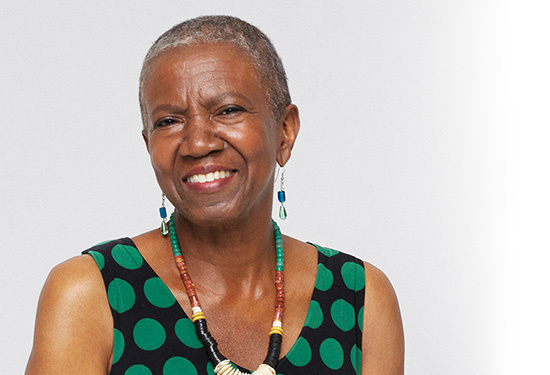 Martha Williams woke one morning in July 2014 with a weird sensation in her right breast. As she lay in bed, the 68-year-old Brownsville woman felt a hard, walnut-sized knot in her breast.

“I was a little concerned because I take a shower every day and never felt it before. I thought, ‘What is this? How come I didn't see this?’” she remembers. She made an appointment with a doctor at a local hospital who performed a biopsy. She received a diagnosis of encapsulated papillary carcinoma.

“[The doctor] immediately suggested a mastectomy,” she says. The surgeon also told Martha she would not be able to have breast reconstruction surgery because of a prior surgery that made her abdominal tissue unusable for the breast reconstruction. She did not want to have breast implants because of concerns that the implant could rupture. “I didn’t want to lose a breast for something the size of a walnut. That wasn’t for me.”

So Martha began to research alternative treatment methods. She went on a health retreat and became a vegan. She started taking supplements and undertook other holistic health remedies. She also returned to her normal life — working and caring for her mother who suffers from dementia, and an elderly aunt.

But in 2017, things changed. She started to feel pain in her breast, which had gotten bigger over the years. And her nipple began to look different. To add to this, Martha’s cousin died from breast cancer. Coupled with changes in the appearance of her breasts, she was prompted to get help. A friend recommended Martha see Dr. Jeffrey Vieira, an internal medicine doctor at NewYork-Presbyterian Brooklyn Methodist Hospital.

“I spent the last three days of my cousin’s life with her. At that time, I thought I better let somebody take a look at this. So I went to Dr. Vieira and when he went to look at my breast all of a sudden it started bleeding. He sent me to the emergency room,” she recalls. In some cases of papillary breast cancer, the tumor is beneath the nipple, which can cause bloody nipple discharge. The tumor in Martha’s right breast grew considerably over the years, causing an open sore to develop on the underside of the breast that eventually began to ooze blood. Martha was subsequently given a bone scan to determine if the cancer had spread to the bones – it had not metastasized.

Dr. Vieira referred Martha to Dr. Raffaele Borriello, a surgical oncologist at NewYork-Presbyterian Brooklyn Methodist. Though Martha’s condition was serious, she remained skeptical about the traditional treatment method of surgery.

“Dr. Borriello asked me, ‘Why haven’t you started chemotherapy?’ I said, ‘I have had two cousins and two friends who did surgery, chemo, and radiation, and they are all no longer with us,’” she says. Dr. Vieira then referred Martha to Dr. Alan Astrow, a medical oncologist at NewYork-Presbyterian Brooklyn Methodist. “Dr. Astrow started to say, ‘Well we’re going to —, ‘and he stopped and instead said, ‘Ms. Williams, what do you want to do?’ He had me. He wasn’t pushing anything on me.”

“Dr. Ashamalla examined me and said, ‘Ms. Williams, I’m going to be very blunt with you; this is what’s going on,’” she recalls. Martha wasn’t doing well. Because of her delay in treating the tumor, the cancer overtook the whole breast. She had also lost significant weight. Dr. Ashamalla encouraged Martha to undergo a mastectomy. When she agreed, he quickly contacted Dr. Astrow who arranged to have Martha admitted to the hospital and called in Dr. Borriello to perform the surgery.

“My son wanted me to go to a large cancer hospital in Manhattan, but I was so confident of what my doctor said and I convinced my son that it was the right decision. I never regretted that decision,” she says.

On January 22, exactly one year after first seeing Dr. Vieira, Martha had her right breast removed. She then went on to have chemotherapy and radiation therapy. Ten months since the surgery and treatment, Martha is now cancer-free.

“When people think about cancer treatment, they think about the places that you see on the commercials. But, what I was very impressed with was that we have an oasis in the desert,” she says. “We have NewYork-Presbyterian Brooklyn Methodist Hospital right in our borough. I have found that there are hospitals in Brooklyn that may not be widely known for what they do, but they're excellent at it. And if you have to go that route, that's where you should go.”