Thirteen-year-old Jayden Vasquez is a typical teen. The eighth-grader from Sheepshead Bay loves to play basketball and video games and participates in theatrical plays at school. Looking at him, one would never know that four years ago he underwent innovative surgery to remove a massive tumor at the base of his brain and eye.

In the summer of 2015, Jayden’s left cheek began to swell. His mother, Ebony Vasquez, took him to his pediatrician who recommended Jayden see a dentist. But when Ebony took her then nine-year-old son to the dentist, she was told Jayden had a lump in his mouth and should be taken to the emergency room to have it evaluated. Ebony took her son to an emergency department in Coney Island, but they couldn’t figure out what was wrong. So she went to another hospital, and then another.

“I was going to each hospital trying to figure out what this was. But they didn’t know,” Ebony recalls. Eventually, the Vasquez family was referred to an otolaryngologist, also referred to as an Ear, Nose, and Throat (ENT) specialist. “We saw an ENT who recommended that we see Dr. Gudis. When we saw him, he was the first one to tell us what Jayden has.” 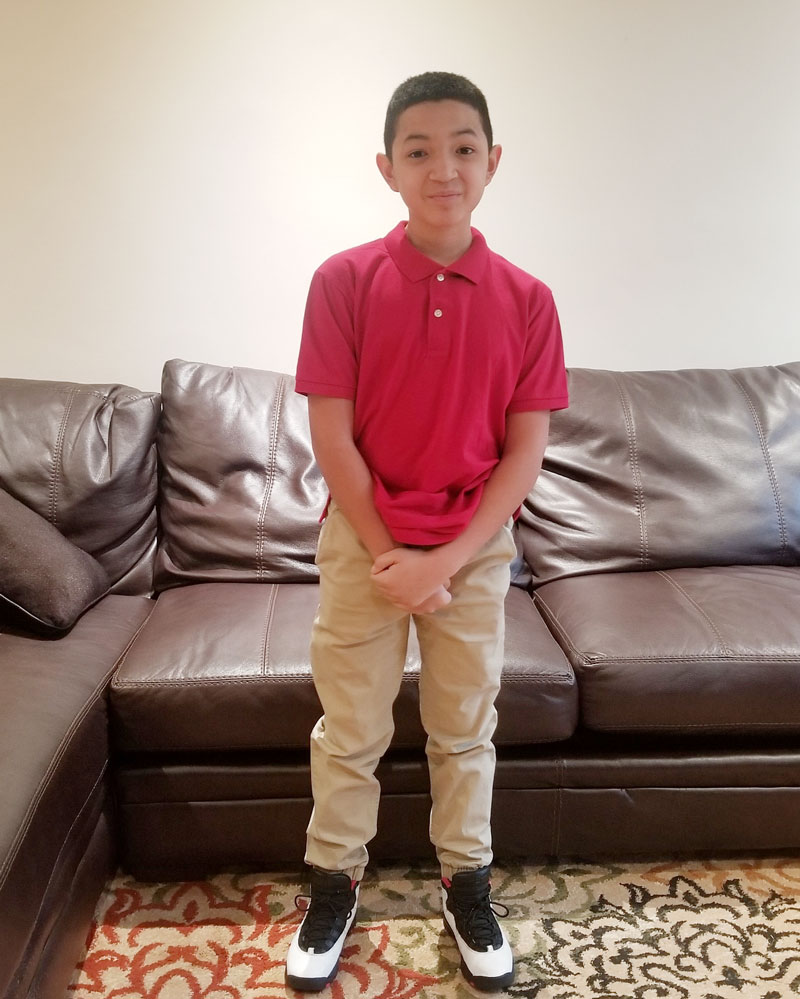 Dr. David A. Gudis is the Chief of the Division of Rhinology and Anterior Skull Base Surgery in the Department of Otolaryngology – Head and Neck Surgery at NewYork-Presbyterian/Columbia University Irving Medical Center. Rhinology is the study of diseases of the sinuses and skull base. Dr. Gudis suspected that Jayden had a juvenile nasopharyngeal angiofibroma (JNA), a benign vascular tumor at the base of his skull. Although JNAs are benign, they can expand quickly into various areas of the head and brain, making them very difficult to treat.

An MRI demonstrated that the tumor was very large and growing quickly, extending from inside his nose, down around his lower jaw, pushing out his left cheekbone, and extending into his orbital apex and cavernous sinus which are in the back of his eye and base of his skull. Although the tumor did not cause Jayden much physical pain, it resulted in discomfort and severe nosebleeds.

JNA tumors are very rare, making up less than .05 percent of all head and neck tumors, and tend to occur in teenage boys. They are believed to grow in response to androgenic hormones (male puberty hormones). Although Jayden had not yet gone through puberty, at his age his body did have the hormones that can cause a JNA to grow. However, his doctors say it is highly unusual for such a massive JNA to have grown in a boy his age.

His doctors knew they had to remove the tumor to prevent Jayden from losing his vision and suffering any permanent facial disfigurement. Traditionally, these tumors require a transfacial approach, in which an incision is made along the side of the nose and through the lip, and in some cases the whole face is cut open. However, Dr. Gudis and his colleagues Dr. Marc Otten, a neurosurgeon at NewYork-Presbyterian/Columbia University Irving Medical Center and Dr. Philip Meyers, Clinical Co-director of the Neuroendovascular Services at NewYork-Presbyterian, chose a minimally invasive approach. In September of 2015, they performed an endonasalendoscopic resection, in which they removed almost the entirety of Jayden’s tumor through his nose without a single facial incision. 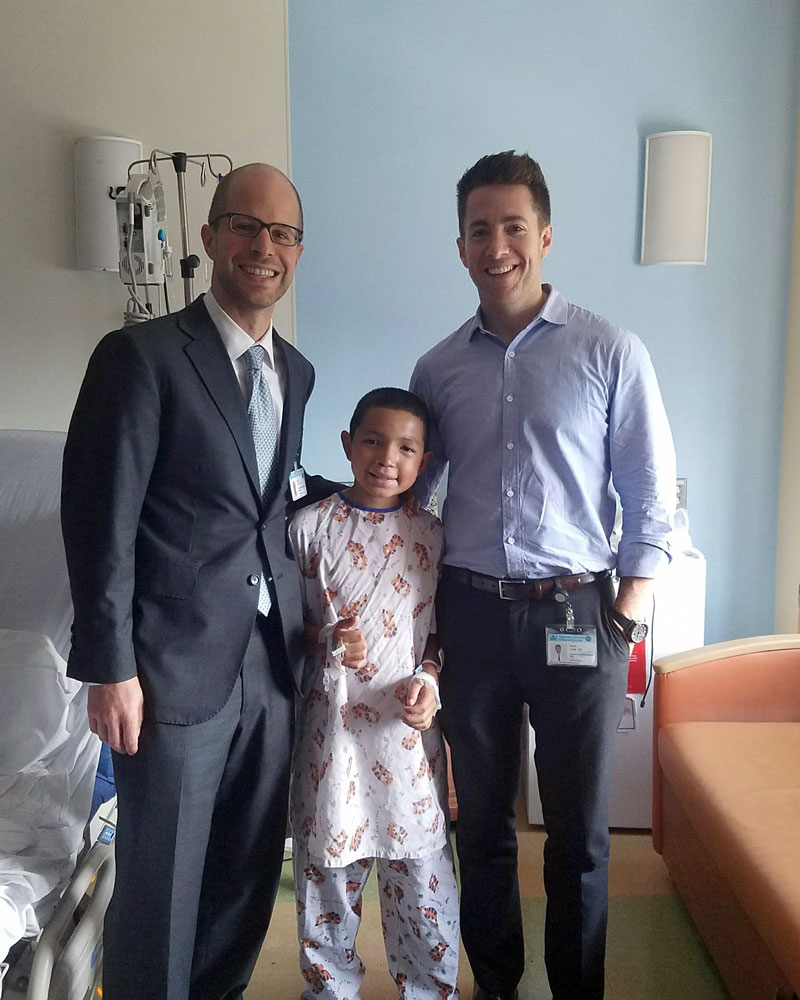 “Dr. Gudis and Dr. Otten removed the tumor, which they said was the size of a grapefruit or a softball. The best thing was, they didn’t need to cut him open. Everything was done through his nose or mouth,” Ebony says. Jayden spent a few days in the intensive care unit at NewYork-Presbyterian Morgan Stanley Children’s Hospital before being discharged. Within two weeks, he had returned to school.

Because of its proximity to Jayden’s optic nerve and carotid artery, a small portion of the tumor was intentionally left behind. Dr. Gudis monitored the tumor over the next year. The tumor continued to grow, so Dr. Gudis and Dr. Otten performed a second endoscopic resection one year later. During the second operation, they were able to successfully remove the enlarging component of the tumor that had extended along the optic nerve and cavernous sinus. Following the second surgery, Jayden was back to his normal self within days. Thanks to advanced minimally invasive surgical techniques and cutting-edge technology, his family could hardly tell he had undergone surgery even immediately after his operations.

Dr. Gudis continues to monitor Jayden to ensure the tumor does not return. Looking back on the experience, Ebony is grateful her son was able to receive such compassionate and innovative care.

“From the moment we got to NewYork-Presbyterian, we felt so comfortable because they talked to us, explained everything. It’s so important to us that Dr. Gudis and Dr. Otten and their team were able to make us comforted and calm,” Ebony says. “Even though we live so far away, I wouldn’t want to go to another doctor because he’s the top, to me.”

To learn more about the pediatric ENT program at NewYork-Presbyterian, visit nyp.org/pediatrics . To find an ENT specialist, call 877-697-9355. 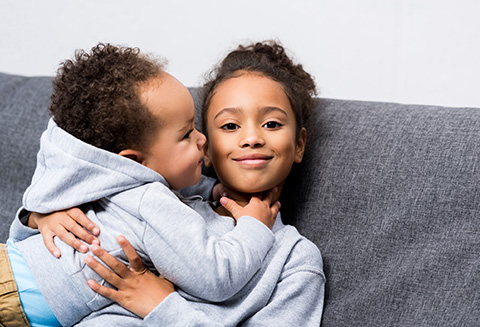 Preparing for siblinghood: Talking with your children about what to expect when you’re expecting 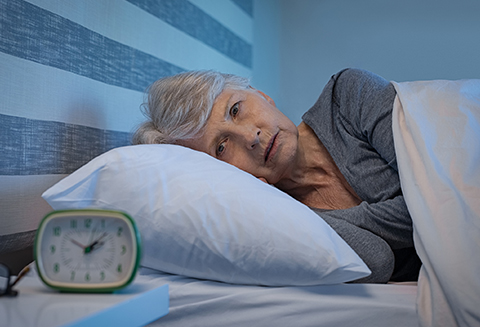 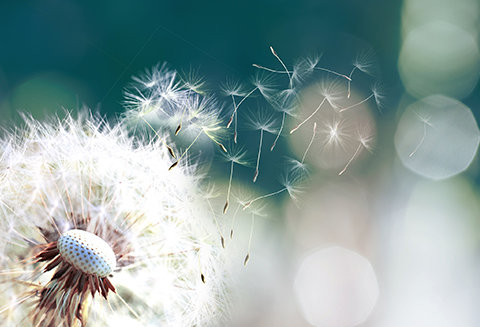