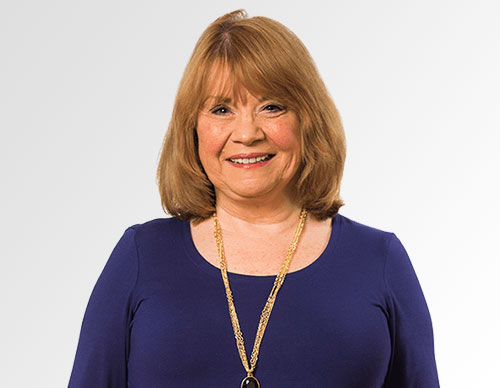 You have to be aware of your own body. If one part of it is not working the way it’s supposed to, it can affect everything. It’s your body and your responsibility to keep it healthy.

Having had small bowel carcinoid surgery, as well as living with a hiatal hernia, Joan Bigg Campana was no stranger to pain. A cancer survivor, Joan had regularly been monitored with colonoscopies and endoscopies, all of which revealed nothing. So when she began experiencing severe pain in her chest and side, she chalked it up to the ills of growing older.

“I was used to some discomfort,” she says. “My GI doctors had warned me years earlier that surgery for a hiatal hernia would be difficult and I should just learn to live with it.” However, eventually the pain began to severely impact her life reaching a point where could barely get out of bed in the morning. Joan knew something had to be done.

Bloods tests revealed she was anemic, and a CAT scan showed that the hernia had grown dramatically pushing her lungs up into her shoulder area and her stomach towards her neck. Joan was referred to Dr. Nasser Altorki, Division Chief, Thoracic Surgery, and a member of the Center for Advanced Digestive Care at NewYork-Presbyterian/Weill Cornell Medical Center.

“Essentially Dr. Altorki had to relocate my organs back to their original positions,” says Joan. “He performed the operation laparoscopically. I don’t have a single mark on my stomach. He was just amazing.”

After spending a week in the hospital, Joan returned home to begin a nearly yearlong recovery. Now, she is pain free, walking greater distances than ever before, and enjoying her passion for ballroom dancing with her husband.

“It was a hard recovery, but it was worth every minute of it. I can’t imagine now that I was living that way,” says Joan. “You have to be aware of your own body. If one part of it is not working the way it’s supposed to, it can affect everything. It’s your body and your responsibility to keep it healthy.

“We all slow down a little, but you shouldn’t have pain, even if you are getting older,” adds Joan. “You have to be proactive and go to the doctor.”